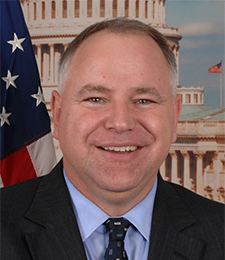 The headline on this post is lifted from the headline on a “press release” I received Tuesday from the National Republican Congressional Committee, the arm of the party that works to win House elections.

The subheadline reads: “As DCCC Gives Away ‘I <3 ObamaCare’ Stickers, Does Walz Still Have One?” The press release says: “With the law crashing down around him, it’s worth asking if Walz still has his sticker. He could peel away a sticker, but he can’t peel away his repeated support of ObamaCare.”

U.S. Rep. Tim Walz, D-Minn, isn’t high on the list of vulnerable targets, but because he comes from a swing district, he’s biennially on the list of possible targets who might get knocked off in a big wave or if he messes up really bad, or if the Republicans recruit a really strong challenger. So he gets targeted for low-effort hits like this one. It’s not as if it costs the NRCC anything like, say, a TV ad would. It’s just an email sent to reporters. It’s not even about Walz. Google up a few key words from the press release and you’ll see that it’s being run against any number of similarly situated Dem incumbents who voted for the Affordable Care Act, with all the words the same except the name of the target.

It’s loaded with the kind of half-truth and tendentious word choices that no journalist would ever use outside of quotation marks, and most wouldn’t use even as a quote that can be attributed to a party official, in this case NRCC Communications Director Andrea Bozek, who supposedly “said” them.

I put the word “said” in quotes because I’m skeptical that Bozek ever actually “said” them. It’s unlikely that she “said” them over and over, in a series of sentences that were identical except for the name of the Dem incumbent.

The press release asserts as a “fact” requiring no backup that the Affordable Care Act is a a “government takeover of health care,” that has now been revealed as a “disaster” and that in voting for the law Walz “turned his back on Minnesota.”

It mentions that premiums have risen and policies have been canceled. And it’s true that some American have had their pre-Obamacare policies canceled, even though President Obama said on many occasions that this would not happen. It mentions that premiums have risen, and this is also true for some Americans. It does not mention that millions of Americans will pay less for health insurance as a result of the law, nor that millions more who had no health insurance will now be covered (although that number, of course, includes some who preferred not to be insured but will now have to pay a penalty if they choose to remain uninsured).

Once again, I confess that there is nothing unusual, remarkable or newsworthy about this press release. And no doubt my own biases had something to do with deciding to hold it up to ridicule. And yes, we live in a world of b.s. But I what would happen if all the b.s. got held up to ridicule?

I fear I’m being a complete jerk about this whole thing. Party press releases that are exact moral equivalents of this one come out in large numbers the closer one gets to an election. Without implying any assumption about which party does more of it, both parties do it all the time. It’s just that every once in a while, it’s possibly worth pulling the curtain back slightly and calling the b.s. by its name, even if only to avoid getting too accustomed to either ignoring or going along with it.

Does Tim Walz Still Have His Obamacare Flair?