Al Franken, who won one of the narrowest U.S. Senate election victories in history in 2008, will seek reelection this November. He has no serious challengers for the DFL endorsement in May nor the primary in August. It remains to be seen how much of a challenge he will have in November.

If you think back to 2009, when Franken joined the Senate six months late because of the long recount battle, Republicans were anxious to get another crack at him and he was often presumed to be wearing a political target on his back.

Then he wasn’t. Franken, rather blatantly, adopted a strategy of keeping his head down. He stopped making jokes (especially rude ones). He focused on serious issues that tended not to make headlines. He took the lead in getting an important provision into the Obamacare law. He came home a lot and did local media but didn’t take many national media opportunities, as if to make a statement about what and where his priorities were.

(Forgive me this aside. To make sure I had the date right of Franken’s belated swearing in, I just looked up a clip about it and found this, from the L.A. Times: “Al Franken, the funnyman who wrote the best-seller ‘Rush Limbaugh Is a Big Fat Idiot,’ was sworn in as the junior senator from Minnesota on Tuesday, without doing one single funny thing.” Since then, Minnesotans and the national media have become accustomed to how unfunny and even wonkish Franken has been.)

Sen. Amy Klobuchar’s stunning, record-setting blowout victory in her 2012 reelection gave Republicans nationally the impression that Minnesota was not a promising place to look for pick-ups.  By mid-2013, Franken’s approval ratings were in the solid mid-50s. Franken raised a ton of dough and, as was obvious from his first race, clearly could raise another ton if he needed to. (And he has raised a ton of dough.)

Then, in a big boon to his reelection chances, the three or four well-known Minnesota Republicans who might have decided to challenge him and who would have started out with immediate name recognition and established political skills  — Norm Coleman, Tim Pawlenty, Erik Paulsen, John Kline — decided not to. When the pundits started looking at the 2014 Minnesota U.S. Senate race they mostly thought Franken was surprisingly safe.

Now they are cautiously reassessing. Stu Rothenberg of the Rothenberg Political Report still lists Franken as one of 10 Dem senators whom he rates as “safe.” It’s the best rating. But Charlie Cook (Cook Political Report) rates the race as “likely Democratic,” which is a step away from his highest rating of “solid.” Larry Sabato’s “Crystal Ball” likewise lists Franken’s reelection as “likely,” which is less than “safe” but safer than “leaner.” 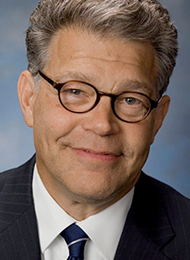 Describing his thinking in his column, Cook wrote this:

Then there are the races that are competitive but where the party now holding the seat has a clear advantage, although it’s an advantage that could evaporate if the opposition party fields a strong candidate. Republicans have no seats in this column, while Democrats have three — the Minnesota race featuring incumbent Al Franken, and the open seats in Iowa and Michigan.

Jennifer Duffy, who covers Senate races for Cook and National Journal, said last week that races with the “likely” rating are “our watch list,” races on which she is keeping an eye because they seem like they could move either way, back to safe for the incumbent or in the other direction.

The pundits have downgraded Franken’s chances in part because of the general growing pessimism toward the Democratic Party’s fortune, symbolized most directly by the declining approval ratings of President Obama. Franken, by some measures, has been one of the most liberal senators and one of Obama’s most reliable allies.

But the new attitude toward the race has been substantially about the impression made on the political cognoscenti by the likely Republican nominee to challenge Franken, businessman Mike McFadden.

There are six declared candidates for the Republican Senate nomination to face Franken. Three of them hold public office. Chris Dahlberg of Duluth is a St. Louis County commissioner. State Rep. Jim Abeler of Anoka is one of the (or possibly the) most moderate Republicans in the Legislature.

State Sen. Julianne Ortman of Chanhassen has represented a deeply red district in exurban Carver County for 10 years and has held leadership positions within the Republican Senate caucus. Ortman was Tax Committee chair the last time the Republicans controlled the Senate. But over the past week as I conducted various on- and off-the-record interviews with sharp political thinkers, I didn’t not find anyone who was not part of the Ortman campaign who thought she would be the nominee or who thought anyone other than McFadden would be on the ballot against Franken in November.

Until this past week, I assumed that Ortman was almost a lock to get the endorsement. And she did win the non-binding straw poll conducted at the precinct caucuses (by a solid 31-23 percent over McFadden).

Ortman’s strength as an endorsement candidate and in the straw poll may give off the (false) impression that this race for the nomination might fit a pattern, familiar around the nation, in which the Republican electorate has to choose between right-wing firebrand, backed by the Tea Party and/or Libertarian wings of the parties, and a conventional pro-business conservative. This is a pattern Democrats have come to love, which has enabled them to swoop in after a Republican civil war and win several Senate races around the country in red states.

But, other than the fact that Ortman’s campaign manager Andy Parrish is a veteran of the Michele Bachmann political operation, there isn’t much to indicate that Ortman is a Tea Party or Libertarian candidate. In the Legislature, she has been a mainstream conservative. As Tax Chair, she favored increases in some taxes, although in the context of a program designed to achieve overall tax neutrality.

(Some of the details of that Ortman-sponsored bill are here. The tax cuts in it were mostly for business.)

After interviewing her in November, Rothenberg wrote that Ortman “isn’t running as an insurgent outsider.” In 2012, she was challenged for the Republican nomination by a candidate challenging her from her right who managed to deny her endorsement, although she did dispatch him by 58-42 in the primary on her way to an easy general election victory.

I called Marianne Stebbins of Excelsior, who has been a leader of the Ron Paul “Liberty” movement in Minnesota. The Paulites have demonstrated their ability to leverage a relative few highly committed activists to make a big impact, as they did for Ron Paul in the 2012 presidential race, capturing 32 of 40 of Minnesota’s delegate positions to the presidential nominating convention. I figured if the Republican right was prepared to do the same for Ortman, Stebbins would know. Her answer was no, they are not.

“There’s really not a liberty candidate in that race,” she said. McFadden represents the kind of big business Republicans who “aren’t really for smaller government. They’re for big government as long as it’s controlled by them,” she said. Stebbins is leery of Ortman’s long-standing connection to Hennepin Sheriff Rich Stanek, whom Stebbins sees as a big-government small-liberty guy on homeland security issues.

Lately, I’m hearing that McFadden’s plans to seriously contest for the Republican endorsement and the chances are decent that he could pull it off. Others pointed out that, whoever gets it, the power of the endorsement is greatly diminished.

The value of the party endorsement used to rest on the idea that the party would put some money and its membership lists behind the endorsed candidate. But, as Tom Horner pointed out when I spoke to him about the race, the Republican Party is out of money, hasn’t had the resources to fully keep up its lists, and the party leadership — which used to be deeply committed to supporting its endorsees — has expressed a new openness to primary challengers.

I’m not in the business of making predictions and I’m not making one here. But as all the smart analysts I interviewed kept making the case that McFadden had done everything right so far and was in such a strong position, I started asking them if there was any doubt in their minds that McFadden would end up as the Republican nominee to face Franken and they all said no, there was not really any doubt.

One more clear sign of the shape of the race is that I’m getting frequent DFL press releases denouncing McFadden, but not the other candidates for the Republican nomination. Then there’s the amount of money he has raised. There’s his really pretty impressive reluctance to take a clear stand on the major issues facing the country. More on that tomorrow.

Wednesday: How has McFadden established such a dominant position?