Former Secretary of State Condoleezza Rice didn’t mention torture in her brief visit to the University of Minnesota Thursday, but a lot of other people did, and Rice did perhaps discuss the issue with creative ambiguity and defend her role.

At noon, before Rice arrived on campus, Dr. Steve Miles of the U faculty accepted an award for his long service in the cause of human rights (including on the board of St. Paul-based the Center for Victims of Torture).

Miles said in his acceptance remarks that he had closely studied the Bush administration’s use of torture in the interrogation of prisoners in the aftermath of the 9/11 attacks and concluded that Rice “had executive authority over a system of torture and rendition [and] I believe that she should be indicted and prosecuted for war crimes.”

Basically, if one country can decide that a particular emergency situation entitles it to torture prisoners, then another country can do so too.

Across campus, at Northrop Auditorium where Rice was scheduled to speak at 5 p.m., protesters waited to greet her with signs mostly affirming Miles’ view. “No Fee Speech for War Crimes,” one of the protest signs read, referring to the $150,000 Rice was to receive for her appearance. (It should perhaps be noted that the fee was paid with private money, not state or University funds.)

The protests outside of Northrop lasted for more than an hour but the turnout was low and mostly populated by gray-haired veterans of protests past. The level of participation by current U of M students was notably low and mostly organized by Students for a Democratic Society (SDS). “Say No to War; Say No to Condi” read one of the SDS signs. One of my favorites, because it was so long and complicated and had to be scrawled in relatively small letters, said: “War criminals can be feminine and even good pianists.” (In case you don’t know, Rice is an outstanding pianist.)

Several of the protesters wore orange jumpsuits and black hoods to evoke the prisoners who were subjected to “enhanced interrogation” techniques including waterboarding.

Finally, at 5 p.m. the event began, as part of a series honoring the 50th anniversary of the passage of the landmark Civil Rights Act. Rice, who grew up black in Birmingham, Ala., was a child when the law was signed. She described her own middle-class upbringing. Both parents were educators. But she recalled being unable to go into a restaurant. Her references to segregation and bigotry were mostly about discrimination against her ancestors, although she did say that the Civil Rights era was like a “second founding” of the United States. 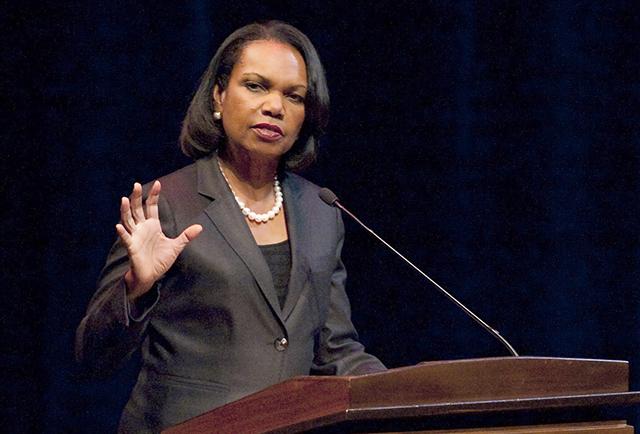 MinnPost photo by Craig Lassig
Condoleezza Rice: “The work we have left to do is to make sure that aspiration is not ground out.”

I understand that some of the motivation to invite Rice was to ensure that the series on civil rights was not overly dominated by a liberal or Democratic perspective. But Rice didn’t offer much perspective on it at all. Along the way she mentioned that she is a Republican because, in part, she believes in “limited government.” She endorsed “federalism,” by which she meant stronger states and less Washington-centrism. She called for non-specific changes in immigration and criticized her party’s recent efforts to “insult large swaths of the populace and then hope that they don’t turn out to vote.”

Her talk meandered — but never meandered too near to what the protesters outside wanted to discuss. Today, she said, race is no longer disqualifying for those who have access to a good education, but because some schools are not so good, “the K-12 education crisis is the greatest threat we face as a country.”

“The work we have left to do is to make sure that aspiration is not ground out,” she said. (For some reason, Rice’s contract to give the talk prohibited recording, so the quotes in this piece rely on shorthand taken in the dark.)

Elephant in the room

The format allowed a few minutes after her opening remarks for Rice to take questions from Eric Schwartz, dean of the  U of M’s Humphrey School of Public Affairs. (The Humphrey School organized the series on the Civil Rights Act anniversary.) I know that some critics of the Rice invitation were counting on Schwartz to bring up the elephant in the room — the torture issue.

He may have meant to, but he actually didn’t, at least not in way that put much pressure on her to call the elephant by its name. He offered her an opportunity to expand on some comments she had made in her memoir of the George W. Bush years (during which she served as national security adviser and secretary of state).

In the memoir, Schwartz said, Rice wrote that she was glad that the administration had ultimately moved its policy for treating prisoners of the Global War On Terror in a “more sustainable” way.

What did that mean, Schwartz asked, which I took to be an invitation to say anything about the elephant that she wanted to say.

In the immediate aftermath of 9/11, the administration was terrified that another attack might be coming, Rice said. In order to prevent such a follow-up attack, the president asked about the legality of certain measures that he was considering taking, Rice said. This surely was a reference to waterboarding and other “enhanced interrogation” techniques, but Rice didn’t specify as much. If you wanted to fill in the blanks for her, which shouldn’t be necessary, but if you wanted to, you would say that she was hinting that certain things of arguable legality were done out of a desperate desire to head off the next attack.

There are laws, and legal advice given to presidents by attorneys general, and Congress can pass more laws and the courts can interpret them, Rice said, or something along those lines. And a country like the United States, in which Osama bin Laden’s driver (Salim Hamdan) could have his conviction overturned, shouldn’t have to take any criticism from others (she mentioned Europeans) about whether it (the USA) respects the rule of law. (Rice was interrupted by applause for that remark.)

But by 2005 (the year Rice moved from NSA to secretary of state), the day-to-day panic was lessened. Al Qaida was on the run and diminished in its potential to mount a serious new attack, she said. It seemed possible to “unravel” some of the questionable tactics and policies that had been pursued in immediate post-Twin Towers power. She said she advocated for some of these changes, often on the other side from Vice President Dick Cheney, and she won some of the arguments. Rice quoted herself as having told President Bush that “the United States doesn’t disappear people.” (This also drew applause.)

That’s as close as Rice came to discussing the torture issue.