On Friday (as MinnPost had divulged just a few hours earlier), Kevin Terrell of Minneapolis announced his candidacy for the Independence Party nomination for the U.S. Senate seat occupied by DFLer Al Franken. On Saturday in Mankato, the IP’s state convention endorsed Terrell for that very same office (and a full slate of candidates for all the statewide races).

The Terrell announcement event Friday afternoon at the U of M’s Carlson School of Management was a low-key affair (falling as it did on the last day of the legislative session), attended by just a couple of reporters and a couple of dozen or so supporters (most notable among them were the IP’s 2008 Senate candidate Dean Barkley and former Gopher running back Darrell Thompson).

Terrell opened with a slightly eerie joke that asked, Who does a better job of listening to the American people: Al Franken or the NSA? When I asked him later whether he meant anything particular about Franken as a poor listener, he said no, he feels few senators are open enough to interacting with their constituents. He, as a senator, would rectify that by, among other things, always publishing his schedule of meetings and appearances.

As for the NSA, Terrell, who describes himself as a former member of the intelligence community from his days with the Defense Intelligence Agency and as a contractor with the CIA, said he was horrified that the NSA — which is supposed to concern itself with foreign-based threats — is collecting data on the communications of U.S. citizens.

Asked by one of his friends at the announcement event for a bumper-sticker slogan that would summarize his campaign, Terrell replied: “Imagine, build, enjoy a brighter future,” which he later told me he had made up on the spot.

Asked how he would deal with the biennial IP problem of voters who fear that they would be wasting their vote on him because he cannot win, Terrell said he would tell Minnesotans — given the dysfunction in Washington — “that they are wasting their vote every time they vote for one of the two big parties.”

He later asked me to consider how effective he might be in breaking the gridlock in Washington if he and Maine Sen. Angus King held the balance of power in the Senate next year. (King is a centrist, a former governor, who won election to the Senate as an independent, although King caucuses with the Democrats.) 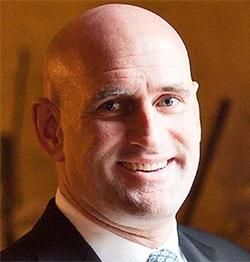 On substantive matters, Terrell said that he favors a revenue-neutral radical simplification of the federal tax code. (Republican Senate candidate Mike McFadden has a similar position.) When pressed for a specific tax code change that he would support, Terrell brought up the “carried interest” loophole, which allows the enormous incomes of hedge fund managers to be taxed at the low capital gains rate. Terrell said that loophole is one reason that billioinaires can end up paying a lower effective tax rate than their secretaries. (McFadden, to my knowledge, has not identified any specific credits, deductions or other tax loopholes that he would  eliminate.)

Terrell also criticized the Affordable Care Act, saying that he favored less federal regulation and more state control over health matters. When I asked him whether he would vote for repeal of Obamacare if the result would be an increase in the number of Americans without health insurance, he said that if those who are uninsured had chosen that status, it would be OK with him. That answer raises several follow-up questions, which I didn’t ask, but perhaps that’s enough for Day One of the Terrell campaign.

Compared to past cycles in its couple of decades of history, this year’s IP slate lacks anyone with much pre-existing statewide name recognition. (Its past nominees for governor and senator have included Jesse Ventura, Tim Penny, Peter Hutchinson, Tom Horner and Barkley. Ventura was its only statewide winner.) If none of the statewide nominees receive at least 5 percent of the popular vote this year, the IP will lose its status as a major political party under Minnesota law.