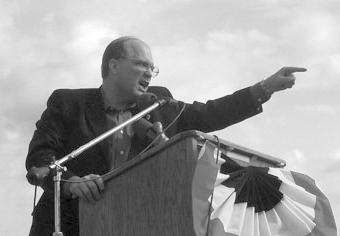 Move to Amend is a grassroots movement seeking to build support for a constitutional amendment that would overturn the U.S. Supreme Court’s Citizens United ruling and establish that corporations are not people and do not have the right to spend unlimited sums of money on political advertising.

One of the organization’s leaders, David Cobb, spoke to 100 or so intensely focused activists Tuesday night at the First Unitarian Society in Minneapolis.

I went, expecting the talk to be about the amendment and the strategy for getting it passed and ratified. But Cobb, who was also the 2004 presidential nominee of the Green Party, spent little time on the strategy.

Amending the U.S. Constitution is difficult and rare. It requires first a two-thirds majority in both houses of Congress, then ratification by three-fourths of the state legislatures. Alternatively, the amendment process can bypass Congress through action in two-thirds of the states themselves. The process even can (but never has) lead to the calling of a new constitutional convention, although the results would still have to be ratified by 37 of the 50 states. In today’s polarized political culture, any of those paths would be an extremely heavy lift.

But Cobb, who spoke for more than an hour, spent almost no time on the text of the proposed amendment or the strategy for getting it passed. The strategy, he said, is to build a movement.

In building a movement, facts and arguments are overrated, Cobb told the audience (a savage blow to a fact-and-argument-obsessed old codger like me).

Citing the work of liberal linguist George Lakoff, he said that facts affect people only to the extent that the facts are consistent with key stories in which the people already believe. One thing people believe is that a tiny minority of the very wealthy has hijacked the system.

So Cobb spun a tale of the history of the world that circled at least as far back as the European conquest of Africa and the Americas, and the history of corporations, which used to be chartered by the king, who ruled by divine right. A corporation is a “legal fiction,” he said, adopting a term that is invoked on the first day of any law school course on the topic. A corporation is “whatever we the people say it is,” Cobb said. “A corporation only exists to the degree that we as a society say it exists.”

But corporate power has turned democracy upside down, Cobb argued. Corporations now rule, for the benefit of themselves and their shareholders and their profits, and, Cobb said, “we the people get to decide between Coke and Pepsi.”

Cobb, a Texas populist with an accent and strong sense of humor, works with a marker in his hand, gradually writing key words, drawing circles around key words (“democracy,” “sovereignty,” “We, the people”) and arrows between them until he ultimately gets to his one (run-on) summary sentence (OK, three sentences) that he suggests most Americans — across the political spectrum — already believe:

When the United States Supreme Court, heck, when five members of the Supreme Court, waltz in and say notwithstanding logic, history, law, precedent, judicial activism, what they say is we, five of us, are going tell 300 million Americans that we now have to treat a corporation not as the artificial entity created under the political process that it actually is, we’re gonna say that you now must treat it as a person with the same inalienable rights, you pervert the entire framework. “Corporate personhood” is a shorthand for the illegitimate, totally court-created idea, that a corporation must be treated as a person with constitutional rights. And what that does, my friends, it steals our sacred right to sovereignty and self-government.

If you want to watch a video put out by Move to Amend explaining their efforts and arguments, you can view it below.

David Cobb on how corporations are stealing our self-governing rights