We’re a long way away from any televised debates in the Minnesota’s U.S. Senate race. But as long as I was interviewing the leading contenders, I gave each of them an opportunity to ask (through me) a question of the other. The results were interesting, at least to me. See what you think.

At the time of the interviews, a new EPA-proposed rule set a goal of substantially reducing carbon emissions and creating incentives to phase out coal-burning power plants. The goal was to get carbon emissions down 30 percent by 2030 from the level of emissions in 2005. 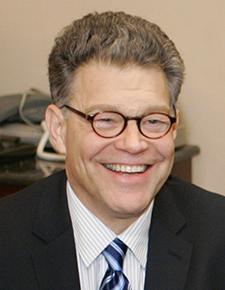 Republicans generally, including Minnesota Senate candidate Mike McFadden, denounced the proposal as part of what McFadden called the “war on jobs” by Democrats, including, by name, President Obama and Sen. Al Franken.

In a righty radio interview (KTCN Am 1130 “Up and At Em with Jack and Ben”), McFadden said:

“The carbon emission reductions that came out yesterday from the White House… It is estimated that these new regulations will cost the equivalent of 250,000 jobs. This is from the Chamber of Commerce.”

A little more on McFadden’s statement below. But first, McFadden wanted me to ask Franken what he thought about the proposed rule. I did. “What I like about the order is that it rewards good actors,” Franken said.

He added that Minnesota had already adopted a standard that was pushing utilities to reduce coal emissions, so Minnesota energy firms like Xcel Energy were  “actually going to get to some degree rewarded,” because of steps Xcel already had in the works. Franken said:

But basically, we have to acknowledge that we have a problem; that there is climate change; it’s happening; 98 out of 100 climate scientists say it’s happening; it’s undeniable.

You can’t look at the fact the sea level has risen and not say there’s been some warming because it means polar ice caps are melting… Greenland is melting.

I’m on the energy committee, and six months before superstorm Sandy we had a hearing on rising sea levels and they said, Well, these storm surges, you’re going to have greater damage and we think that sometime in the future the New York City subways will flood. And they did.

Now you can’t point to one weather event and say that was caused by warming, but I think there’s an overwhelming consensus that’s undeniable that we have to do something about this and we have to lead. We have to lead the world… Also I think we’re going to benefit from this. Because renewable technologies … are the energy of the future.

You look at China. China is choking on itself and they are going to be a trillion-dollar market for renewable energy. They’re investing tremendously in renewable energy themselves; we need to be doing it.  And we need to be doing wind, solar and biomass. I wrote the energy title in the Farm Bill…  Minnesota doesn’t have gas, it doesn’t have coal, it doesn’t have oil, but we do have a lot of biomass. So I am, in that bill I wrote stuff that will help our state.

Franken went on several paragraphs longer, touching on biomass projects and ways that the new standard can be met not just by cleaning up what comes out of the smokestacks of power plants but by conservation and energy efficiency and it doesn’t mean having to replace all the old plants because it allows for retrofitting.

I mentioned above McFadden’s statement about how many jobs would be lost because of the new EPA rule. Googling around for background McFadden’s statement, I found that the Chamber of Commerce job loss estimate he cited is wrong. It has been retracted by the Chamber itself. The Chamber had prepared its estimate before the draft rule was published, based on the belief that the EPA’s proposed rule would call for a 42 percent reduction in carbon emissions. When the rule came out, it called for 30 percent. McFadden was not the only Republican to go public with the wrong estimate. Politifact checked the statement when U.S. House Speaker John Boehner similarly cited the out-of-date Chamber estimate. Politifact gave the statement a rating of “False.”

When I discovered that McFadden had made the same error, I asked his campaign if he wanted to update his statement about the EPA proposal. Through his spokester, Tom Erickson, came this: “In regards to the Chamber stats, Mike did say that, but he was not aware that the study was not based on the actual EPA proposal. However, the larger point still stands: that proposed EPA regulations would have a negative impact on our economy.”

The Chamber of Commerce and the United Mine Workers agree that the new carbon rule will result in a substantial loss of jobs, McFadden’s spokester said. McFadden warns that energy prices will also rise. Xcel has already requested a rate increase to deal with the cost of meeting the 30 percent target that Franken cited, McFadden’s campaign said.

Now on to the question Franken’s campaign asked me to put to McFadden. At the time, the Senate had just debated a bill that would have reduced the current interest rate on students loans to 3.86 percent and allow those who already owe at higher rates to refinance their loans down to that level. The bill attracted 56 votes, but not enough to overcome a Republican filibuster. Franken, who supported the bill, wanted to know how McFadden would have voted.

McFadden said that he liked the idea, but before he could vote for it he would want to know how much it was going to cost the government and how it was going to be paid for. 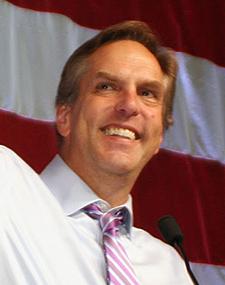 That’s easy, Franken replied, the bill contained within it a way of raising far more revenue than cost since it included the implementation of the so-called “Buffett Rule.” Under that rule, named for multibillionaire Warren Buffett who supports the idea, the extremely wealthy would have to pay income tax at a rate of at least 30 percent. Of course the marginal income tax rate on incomes in the millions is already higher than that, but the Buffett Rule would prevent those high earners from using various tax provisions get their effective tax much lower.

Franken didn’t have the numbers on the top of his head, but other reporting on the student loan bill has said that it would have cost the government $51 billion over 10 years but raised $72 billion in new taxes.

Looking back, I’m not sure whether on my first round with McFadden he was aware that this was a bill that would actually reduce the deficit but that he objected to the means by which it would do it, or whether he was unaware and didn’t want to commit to the cost of the bill until he heard about how it would be financed. After I understood what was in the bill, I followed up through spokester Erickson and got this response:

Mike supports allowing students to refinance, but instead of raising taxes, Mike thinks the government should cut spending elsewhere to pay for it. If Sen. Franken were serious about helping students refinance their loans, he should reach across the aisle and try to build consensus with Republicans, not play politics by tying the bill to a massive tax increase.