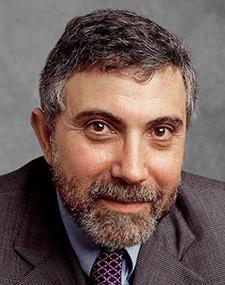 As he has for a long while, Paul Krugman (in his column Monday) uses the latest CBO report to once again mock debt and deficit hawks.

I generally like Krugman’s work. And there are idiotic debt and deficit hawks who seem to want to use the debt/deficit numbers only as scare tactics to advance their real cause, which is to shrink government. Someone who was concerned primarily with the rising debt would not rule out tax increases as part of the long-term solution. A lot of righty debt/deficit hawks are phonies.

And yet I consider myself a moderate debt hawk. I’m open to the argument that, in the aftermath of the Great Recession, we need to concentrate on stimulating the economy, and that includes deficit spending which, if done right, can have the added advantage of relieving some of the most severe suffering caused by the recession. Up to that point, I’m a Krugmanite.

Krugman claims once the immediate problem of slow growth is solved, there will be time to focus on debt/deficit. But I’ve become skeptical that he really means it.

In the weakest section of Monday’s column, Krugman writes:

“Debt in 2039 — a quarter-century from now! — is projected to be no higher, as a percentage of G.D.P., than the debt America had at the end of World War II.”

I guess that’s supposed to be reassuring, since the debt has been that high before and the nation survived and went on to new heights of prosperity.

But as this chart makes clear, the debt-to-GDP ratio at the end of World War II is a huge historical anomaly. Before that, debt-to-GDP ratio was never above 50 percent. The enormous deficit spending of the war years was tied to the considerable emergency presented by the war. The success of the war effort, which left the United States as virtually the only standing great industrial economy in the world, kicked off a long glorious economic boom that immediately drove the debt back to levels much closer to the historical norms.

To me, saying that the current projection for the future debt would lead to a figure that is merely tied with the highest in U.S. history is not all that reassuring, especially if Krugman is not predicting a similar future boom that will drive the debt back to more sustainable levels.

Among the reasons that the current huge debt is a bit less alarming than it otherwise might be is that interest rates are low, which means the annual cost to the treasury of paying the interest on the debt are, let’s say, manageable.

In his column, Krugman writes:

“Oh, and the budget office [CBO] now expects interest rates to remain fairly low, not much higher than the economy’s rate of growth. This in turn weakens, indeed almost eliminates, the risk of a debt spiral, in which the cost of servicing debt drives debt even higher.”

I hope that’s right, but one of the reasons that I am a moderate debt hawk is that I don’t have confidence in anyone’s ability to project what interest rates will be far in the future. If you are sitting on a ton of debt and interest rates go up faster than expected, that’s when the you-know-what hits the fan. The old bonds come due and have to be rolled over at the new higher rates.

Interest on the debt, even at today’s low rates, is costing the government  $252 billion a year. It is projected to become, in 2023, the third biggest item of federal spending behind only Social Security and Medicare. Getting that debt-to-GDP ratio turned south before a (probably unpredicted) big rise in interest rates is the biggest reason I am a moderate debt hawk.

Krugman is (this is the actual figure) one million times smarter than me about this stuff. But I’d worry a bit less about that scenario in the paragraph above, if he and a few other people would worry more.

Correction: The original version of this post said that interest on the debt was the third largest item of federal spending. That was incorrect and the error was entirely mine for misreading the source of the data. It should have said, and now does say, that interest was projected to become the third biggest item in 2023. That’s according to an OMB projection. I thank commenter Jay Willemssen for pointing out the error. Willemssen also noted that the deficit, as a percentage of GDP, has come down dramatically during the Obama years. Also true, although those ratios during the financial crisis of 2008 were anomalous. To me, the key long term figure is the ratio of total national debt to GDP, since we have to pay interest on the total debt. That figure continues to go up every year and is at the highest level since immediately after World War II.