To get the obvious out of the way, the 2014 midterm election was a huge win for the Republicans, in both Houses of Congresses and in governor’s races. It went beyond the friendly map faced by Repubs (many U.S. Senate races in red states with vulnerable Dem incumbents). The Republicans won in purple states too, and even took the governorship of Massachusetts, one of the bluest states in the nation. (Minnesota was a clear exception to this wave, with landslide reelections for Sen. Al Franken and Gov. Mark Dayton. The vulnerable Dem incumbents in the U.S. House, Collin Peterson and Rock Nolan, survived. But even in Minnesota, the Republicans took over control of the House of Representatives.)

The GOP clinched 53 U.S. Senate seats, a solid majority but well below the number needed to break a filibuster or override a veto. Sen. Angus King of Maine, a centrist independent who has caucused with the Democrats, has been telling reporters that his mind is open to the possibility of switching to the Republican caucus if he thought that might be good for Maine.

In the U.S. House, where a number of races are still being counted, the Repubs will end up with at least a net gain of 13 seats and possibly 19 or so, which would put them in range of a 250-185 majority, which would be the highest number for the Republicans since 1931, according to PBS.

The next two big questions are why it happened and what it portends for the next two years. I don’t pretend to have good answers, and you’ll be hearing a lot about this for a long time, but here are a couple of starting thoughts, for which I make no claim to brilliance nor originality:

Obama is toxic. I will confess that I think Obama has been a good president. For all the Republican criticism, the U.S. economic recovery has been one of the strongest in the world, a fact that goes strangely unmentioned. The economic mess began under Obama’s Republican predecessor. But Republicans have succeeded in convincing swing voters that whatever is bothering them is Obama’s fault and every Democrat in Congress stands tried and convicted of agreeing with Obama too much.

Likewise, Obamacare (which, I will also confess, I believe has done much more good than harm) was successfully used during the campaign as a metaphor for incompetent, overreaching government. Likewise, the mess in the Middle East. Likewise the Ebola virus. Whatever you think is wrong in America or the world, Republicans succeeded in convincing the public that Obama is to blame and to imply (without, I would say, many specifics) that Republicans have better solutions.

Bi-election year 2014 was the final chapter in making the president small. The immediate aftermath of 2008 was that Americans had finally conquered their racial aversions. The election of Barack Obama was a victory both for renewed national hope and long-awaited democracy. Obama was big, a star, a voice to be reckoned with, a mind to be taken seriously.

By 2014 Obama was small, a punching bag, easily bullied, the one to whom small politicians could talk tough, abusively, the one whose ideas were ignored, the one whom his fellow partisans would come to avoid at all cost. How could this happen in six short years?

So, for the next two years, we will have Obama in the White House, presumably not agreeing with this analysis of how terrible his policies have been, and Republicans with solid (but not veto-overriding-sized) majorities in both Houses of Congress.

In our strange system, that means nothing substantial can happen, legislatively, without compromise and over recent cycles, bipartisan compromise has gone substantially out of fashion.

I caught Ted Cruz’s act on Fox last night where he said that of course Congress would, as soon as possible, pass a full repeal of Obamacare. True, the Senate Repubs would lack the 60 votes needed to overcome a likely Dem filibuster on such a bill, but they could use the congressional process known as budget “reconciliation,” which enables the Senate to pass a bill with a mere majority.

If that is vetoed and cannot be overridden, Cruz said, the Republican controlled Congress must just repeal the Affordable Care Act piece by piece. Of course, the piece-by-piece approach would still be susceptible to a presidential veto. Those repeal bills, Cruz said, will require Obama to decide “whether to listen to the American people, or just be an absolute partisan and veto them.” 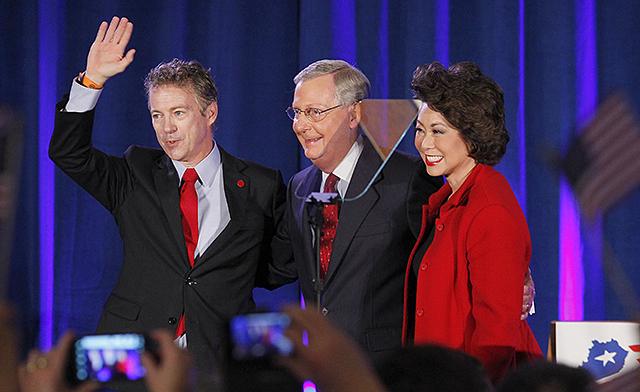 In other words, Sen. Cruz has no plan, other than to continue the gridlock. But  Cruz, who has made his reputation in large part by his disdain for the idea of compromise, will not be in charge of the Senate, Majority Leader Mitch McConnell will, and before the recent change in Washington fashion, McConnell was an old-fashioned dealmaker. Same for Speaker of the House John Boehner. Same, as far as I can tell, for Barack Obama, who came into office declaring there is no red or blue America and who spent many months in his first term trying to figure out how to compromise with the Republicans even when he didn’t really need their votes.

The talking heads on the tube last night were not unaware that the big question of the next two years will be whether bipartisan compromise might come back into fashion. On CNN last night, Kevin Madden, a former aide to Mitt Romney, predicted that it would and that the first promising issue for such compromise would be a comprehensive tax reform plan. McConnell has also mentioned trade policy as a good subject for bipartisan action. Others, including Obama, have put immigration law on that list.

Is it possible? It is possible, but I will remain skeptical until it happens.

In a op-ed article this morning, William Galston of the Brookings Institution opined in the Wall Street Journal that the situation is ripe for compromise, noted that despite his very bad election night, Obama has some leverage because, while Congress can do almost nothing without passing a bill and getting Obama to sign it, presidents have a large and somewhat ill-defined power to take action based on executive authority.

To those with strong feelings about what constitutes good public policy, compromise with those holding other views is not inherently appealing. If the United States had a parliamentary system, last night’s results would have put the Republicans into position to enact their ideas of what’s best.

But we don’t have that system. We have a system in which — except under rare circumstances (and the first two years of Obama’s first term were such a circumstance) — nothing much can happen without compromise. So here’s a bold prediction: In the next two years, either nothing much will happen or we’ll have a new spirit of compromise.