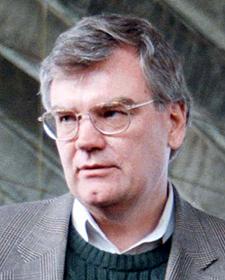 Brian Atwood, former dean of the U of M’s Humphrey School and a veteran of several jobs in the U.S. State Department, spoke Thursday on “Global Disorder and What We Need from the Next President.”

Atwood, whose voice and demeanor always ooze a deep calm, and who begs observers of world affairs to keep things in context, said the short answer to the “what we need from the next president” question was: “Someone who can walk and chew gum at the same time.” A bit more on that below.

Speaking of thinking in context, to explain why the world seems so disorderly, Atwood compared the present to the immediate post-World War II period. Since 1945, the world population has grown from 2.2 billion to 7.2 billion. Extra people, extra problems, Atwood implied.

The United States in 1945, with its economy intact in contrast with the post-war rubble of Europe and Asia, was the clearly dominant power. The United Nations was created — by the victorious powers who set up a mechanism by which any of the big five could veto major actions — to keep the peace. But over the years, the ability of the Big Five to agree on things eroded, leaving the U.N. “only as strong as the members want it to be,” with coherent action often being vetoed.

During the Cold War, the United States and the Soviet Union couldn’t agree on much. During the Nixon years, Henry Kissinger referred to a new “trilateral world,” in which China had joined the Big Two and made it a Big Three. China continues to rise and its ambitions to dominate Asia are causing problems for many of America’s long-time allies like Japan, South Korea and the Philippines. Atwood expressed hope that China is beginning to understand that “with global power come global responsibilities.”

Many countries that were flat on their backs after World War II, and others that had always been poor and weak, have now risen to the point that they have to be taken seriously as economic and geopolitical rivals, Atwood said during a forum at the Humphrey School of Public Affairs.

Actions by Russian President Vladimir Putin are also designed to reassert Russia’s role. Atwood described Putin as a “difficult kind of person” whose actions are “really testing NATO.” But Putin has miscalculated by his aggressive policies toward the Ukraine, Atwood said. NATO has become stronger in reaction to the Russian aggressiveness. The recent EU action to charge Gazprom, the Russian natural-gas giant, with antitrust violations was an indication that Europe does not feel as beholden to nor intimidated by Russia as Putin probably believed.

The world keeps getting more complicated than a bilateral or a trilateral understanding can encompass. But the United States remains the only power that can project a potent combination of economic, military and political strength to all parts of the world, Atwood said.

On the Mideast, Atwood attributed much of the current disorder to the Sunni-Shia conflict. That “hornets’ nest” may have been broken open by the U.S. decision to invade Iraq, Atwood said.

Staying with the Mideast, Atwood suggested that the recent expansion of Iran’s influence may not be sustainable. When you get outside of the predominantly Shia population of Iran, he said, only 20 percent of the rest of the Mideast is Shiite. If Iran thinks it can get involved on all the fronts of the Shia-Sunni conflict, it will likely get overextended. By its involvement in the endless Syrian civil war, Iran may have found “its Vietnam,” Atwood said, which I took to mean that it will ultimately become weaker by trying to do too much, as the United States did in Vietnam.

On the Israeli-Palestinian conflict, notwithstanding recent comments by Israeli Prime Minister Benjamin Netanyahu, Israelis for the most part understand that “the two-state solution is the only solution.” The question even two-state-deal-oriented Israelis worry about is whether there is a Palestinian leader strong enough to deliver the peace that Israelis would expect from a land-for-peace deal.

Asked about the steady stream of criticism aimed to President Obama over foreign policy, Atwood rejected as “too easy” the criticism of all the U.S. problems in the world derive from Obama’s “fecklessness.” His word for Obama’s foreign policy was “thoughtful.”

I promised a bit more on what Atwood thinks we need from the next president other than the “walk-and-chew-gum” test. He also said “we don’t need a hairy-chested person who thinks military power is the answer to everything.”

It should probably be noted that Atwood’s background is in the Democratic Party, including the Bill Clinton administration, and that he left his previous tenure at the Humphrey School to work under Secretary of State Hillary Clinton.

Political Scientist Larry Jacobs, who was recruited by Atwood to run the Humphrey School’s Center for the Study of Politics and Government, asked if Atwood expected to be tapped for service in a possible Hillary Clinton administration. Atwood demurred and said he expects her to find younger talent. Atwood is 72. He currently teaches at the Humphrey School.

He called Clinton’s record as secretary of state “commendable,” and noted that many recent presidents have come to office lacking much foreign policy experience. “Bill Clinton didn’t have it,” he said. “George W. Bush didn’t have it.  But he made what I think was a big mistake of assuming Dick Cheney did.”