“The best obtainable version of the truth.”

The famous Watergate journalist Carl Bernstein is fairly obsessed with the phrase. I’m not saying this in a bad way.

On stage in Minneapolis Thursday night at the great Westminster Town Hall Forum, Bernstein introduced the phrase “the best obtainable version of the truth” (hereafter TBOVOTT) early in the talk and then circled back to it again and again as the summary of what journalism should but too often does not produce and what the public should but does not want.

As a result, “we can’t have a fact-based debate in this country,” he said. We have lost “the ability of each side to accept the sincerity and good will of the other. “ As a result, “Congress is totally dysfunctional” and there is “no good will” across partisan or ideological lines, and little ability to compromise for the greater good. Forty years of “scorched earth politics” and “culture war,” Bernstein said, “has depleted us.” As a result, he said, “I’m not optimistic about what is going on in the politics of this country.”

Bernstein never defined TBOVOTT precisely but I suppose it almost defines itself. I think it purports to be a simultaneously grand and humble definition of what journalists are supposed to put in the paper and on the air every day. The truth, that’s pretty grand. But if TBOVOTT is only a version of the truth, well, that seems to acknowledge that there’s no single and only truth. And if it’s just the best “version” of the truth that was “obtainable” within the confines of time and space and wisdom and within the talents of those assembling it on a given day… well, that’s why I call it humble as well as grand. And to that degree, I share his nostalgia for the (perhaps mythical) good old days.

Bernstein did single out Fox News as the leading factor that led the nation’s news consumers astray. He acknowledged that there are leftier versions of biased journalism, but Fox was the pioneer and Fox is “the most potent political force” to come onto the scene over the past 30 years even though, he added, Fox often reports information that is “demonstrably untrue.”

(By the way, I assumed TBOVOTT was a grand principle Bernstein had been taught as a young journalist, but when I Googled it up, there are lots of references but they were all attributed to Bernstein.) 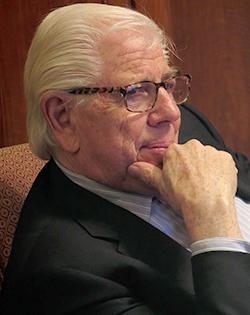 Observing the Clintons, he said, one is struck by the “sheer spectacle,” by which he meant the doings of Bill and Hillary Clinton contain “large parts soap opera.”  He added that the Republican Party is dedicated to “wiping out Clintonism,” which adds to the drama.

Bernstein mentioned just two ideas for making things better. He would favor a constitutional amendment that would overrule the Citizens United decision of the U.S. Supreme Court and impose limits on campaign spending, and he would favor the creation of a “compulsory program of national service for all young people.”

Bernstein’s talk, which was really a Q and A session with former MPR host/interviewer Gary Eichten, will be broadcast on MPR at noon Monday. MinnPost, by the way, was a co-sponsor of the event.