This post will make a sharp turn in the middle because something unexpected and cool happened during a University of Minnesota forum Thursday starring Dennis Ross, who has worked on Middle East issues under every recent president, of both parties, starting with Reagan.

Ross spoke at the Humphrey School of Public Affairs on the question: “Is a coherent policy in the Middle East possible?”

It is extremely difficult for average Americans to understand the Mideast turmoil or to tell, in effect, the good guys from the bad guys. Is it fundamentally a Sunni-Shiite conflict? Is it about Iran (which is populated by Persians) seeking dominance over Arabs? Those divides are in play, but Ross wanted to suggest a coherent way of understanding the conflict, which he believes suggests coherent goal for U.S. policy.

The dichotomy Ross suggests is that the warring parties can be divided into two groups: the radical Islamists, some of whom are Sunni and some Shia, and the non-Islamists, which also include Sunnis and Shiites. The goal of U.S. policy, he said, should be to weaken the Islamists and strengthen the non-Islamists.

The Islamists he named were Iran (a predominantly Shiite nation), the Islamic State or ISIS (Sunni) and Hezbollah (Shia). Hezbollah and Iran are allied but they oppose ISIS. As Ross said: “They aren’t all on the same side, and sometimes they fight each other, but they share certain attributes,” which he listed:

“Number one, they want Sharia law to govern all parts of life and to shape all institutions, but even further, they don’t believe in civil authority. The supreme authority is not a civil authority, it is a religious authority.

“Two, they don’t accept the legitimacy of the individual states in the region. This is obvious in the case of ISIS, which proposes to form a caliphate that would replace all the existing states. But militias controlled by Iran are operated in several Mideast states and in all cases, their goal is to break down those state structures.

“Three, they want to remake the region in their image.

“Four, they view terror as a legitimate instrument for remaking the region.

“Five, they don’t accept the principle of pluralism.

“And seven, they reject Israel’s right to exist.”

Who are the Mideast players that Ross rates as non-Islamists? He listed Jordan, Egypt, the Emirates and then “there comes a point at which I’m going to say Saudi Arabia, and you’re going to say ‘huh?’ Saudi Arabia that is more responsible than anyone for the Salafi ideology that ISIS embodies? 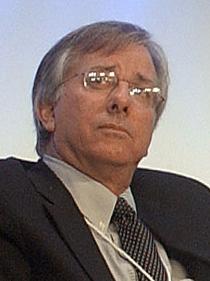 “But I put Saudi Arabia into that category which begins to highlight that this isn’t such a simple distinction. Why do I put Saudi Arabia on the list? First, there’s been some evolution on the part of Saudi Arabia, for example, of the effect of their funding of madrassas around the world, which they now realize has come back to become a threat against them. They are appointing a different kind of clergy.

I kind of liked Ross’ list of the attributes of Islamism, and I can see why he condemns many of those qualities. But I couldn’t help noticing that his lists consisted of first, the leading states and non-state groups that are most hostile to the United States, and second, a list of states that already provide extensive military and economic cooperation with Washington.

But it was during the question-and-answer period after Ross’ opening remarks that things took a surprisingly interesting turn, at least for me.

Dean Eric Schwartz of the Humphrey School, who also has extensive experience in diplomatic and national security posts, although more associated with Democratic administrations, was the moderator. Schwartz, noting that Ross’s approach sounded like it called for more U.S. activism in the region to tilt the playing field in favor of the designated good actors, asked Ross about how this desire to manage the balance of power would square with President Obama’s fairly famous determination to “not do stupid stuff.”

Ross said yes, the policy he advocates would require the United States to be engaged and to do what it could to strengthen the non-Islamists and weaken the Islamists. Sometimes, Ross said, the lack of doing something for fear that it might be stupid stuff turns out to be the worst policy of all. He then suggested that Obama had stayed out of the Syrian conflict too long and allowed that situation to become chaos.

“What drove the president to stay away was that he saw the situation as a potential quagmire,” Ross said. The legacy of [U.S. military involvement] in Afghanistan and Iraq made him exceedingly reluctant, and he focused on the cost of action rather than the cost of inaction.”

Then Schwartz warned explicitly that — notwithstanding his respect and admiration for Ross’s views — he was going to do something “provocative.” That turned out to be suggesting that perhaps Obama had learned the correct lesson from the Iraq war.

Schwartz then brought up the fact that Ross was among those who signed public letters organized by the neo-conservative Project for A New American Century, letters that made the case for invading Iraq in order to get rid of the weapons of mass destruction (which, of course, weren’t there) and that the overthrow of Saddam Hussein would produce democracy in Iraq and spread similar blessings across the region. Only that didn’t happen.

I could say more here about how badly the decision to invade Iraq has turned out and how wrong most of the justifications for “Shock and Awe” and the promised benefits of “Operation Iraqi Freedom” turned out to be. But perhaps you have already heard.

The moment was fraught and actually pretty cool. Schwartz seemed to be wondering out loud how his honored guest, as a supporter of a military action that turned out so badly, could be faulting Obama for reluctance to inject the United States into the Syrian civil war.

“The key is always to learn the right lessons,” he replied. He then told a funny story about talking the Iraq stuff over with Henry Kissinger before the war, the point of which was Kissinger remained skeptical about whether Saddam really had the stockpiles of WMD while Ross believed that the Bush administration couldn’t be saying the things they were saying unless they were absolutely sure.

Then he told another fairly self-serving tale about a lot of really good advice he gave to Condoleezza Rice about things to do to make sure that after the U.S. troops took over Iraq the situation wouldn’t turn into chaos, with a strong implication that if his advice had been followed, the transition to post-Saddam Iraq would have gone a lot better.

I assumed that Schwartz, having made his point, would let it drop. But he didn’t. He said that even if the United States had done a lot of things better in the aftermath of the Iraq invasion, the situation wouldn’t be a whole lot better “because the task was just that difficult.”