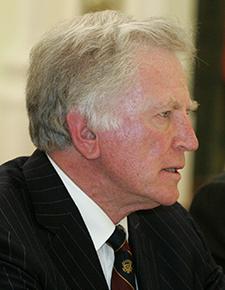 Gary Hart tells Politico he is worried that money is overwhelming politics and that the prospect of a Clinton-Bush race in 2016 suggests a new “dynastic” nature to American politics.

Here’s the money quote (pun intended) from Hart: “If you’ve got to have a billion dollars to run for president, how many people can do that? Only the Clintons and the Bushes and one or two others.”

No duh. But he’s right and we need some of his patented “new ideas” in our politics, and especially new ideas about how to get the money race under control. Because the old ideas have all been declared unconstitutional.

The two fundamental ideas around which the entire post-Watergate campaign-finance regulatory scheme was built were limits on how much any one donor could give and disclosure of who is giving. An underemphasized story in last week’s Washington Post seemed to say that there is nothing meaningful left of either idea.

The story by Ed O’Keefe and Matea Gold was headlined “How a Bush-allied nonprofit could inject more secret money into ’16 race,” but that strikes me as understated.

It was already true that individuals could give unlimited sums to help their favorite candidates get elected, as long as they didn’t give it directly to the candidate’s campaign. It was already true that the kinds of “Super PACs” to which they could donate unlimited sums could be even more valuable than money given directly to the candidates, because the Super PACs could spend the money on ads so scummy that that the candidate wouldn’t want to be associated with them, and the candidate could say that he had nothing to do with them. But in order to make that gag work, the candidate’s campaign and the Super PAC had to maintain some credible illusion of “non-coordination” of their activities.

But according to the Post piece, even that last inconvenience has been made to disappear by the latest wrinkle. From the story:

Jeb Bush has given his tacit endorsement to a new group that can collect unlimited amounts of money in secret, part of a bold effort by his advisers to create a robust external political operation before he declares his expected White House bid.

The nonprofit group, Right to Rise Policy Solutions, was quietly established in Arkansas in February by a friend and former Bush staffer. The group shares the name of two political committees for which Bush has been aggressively raising money — blurring the line that is supposed to separate a campaign from independent groups.

While ideological nonprofits have become major players in national politics in recent years, this marks the first time one has been so embedded in the network of a prospective candidate.

What I get from this is that even the shred of credibility still attached to the pitiful notion of “non-coordination” now lays in tatters, assuming that a “shred” can lay in “tatters.”

The U.S. Supreme Court has ruled that any more burdensome regulation than this would be inconsistent with the First Amendment right of free expression.

If you missed it, I wrote a piece last year as part of the “Electoral Dysfunction” series documenting how other democracies — democracies like England, Canada and France that like to think that they value free speech too — have found that regulation of the intersection of money and speech is absolutely necessary to keep election campaigns from turning into auctions.