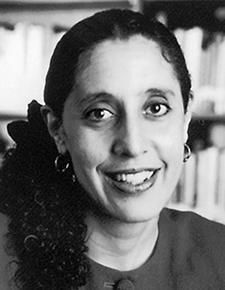 Lani Guinier, the first black woman to become a tenured professor at Harvard Law School, is perhaps most famous to the general public for a job she didn’t get. In 1993, Bill Clinton nominated her to be assistant attorney general for civil rights, but some of her views became sufficiently controversial to convince Clinton to withdraw the nomination before it came to a vote.

She has professed (or does one mean professored?) on at Harvard, written several books and continued to opine in the areas of both voting rights and civil rights. On Friday, she was in town to speak at a luncheon of the Minnesota Black Women Lawyers Network. I had a short interview with her and between that conversation and her talk to the MBWLN, Guinier said:

The U.S. system of democracy needs updating and it could benefit by looking around the world at other democracies that do things differently. The U.S. system is still rooted in the vision of the framers, she said. The framers wanted ordinary voters (at least white, male, adult property-owners) to have some say over their government, but not too much. They employed several elements of indirect democracy, and they still took a fairly elitist view of whom should vote and especially whom should lead the government.

Constitutional amendments have expanded the franchise on a race, gender and age basis, but the United States still suffers from too little participation and too few choices. What it takes to get registered to vote varies widely around the country and many who would be eligible to vote are not registered. In Canada, she mentioned, when the census takers knock on pretty much every eligible voter’s door, they ask whether the residents are registered. If not, they take care of it right on the spot.

In Germany (where, she said, the system was designed with heavy input from the occupying Americans after World War II) a voter can cast two votes at once: one expressing a preference for a particular party and one for a particular candidate to represent their district. Both votes are weighed in assembling the Bundestag, which helps keep Germany from being dominated by just two parties as the U.S. system is.

Guinier was also critical of the U.S. feature that allows a dominant party to redraw the legislative and congressional district maps periodically, a power that is almost always used in a self-serving way by the party that controls.

Most of the above is from our interview. During her luncheon address, she talked about her new book, “The Tyranny of the Meritocracy: Democratizing Higher Education in America.” I can’t say I fully grasped the argument from her remarks. Based on the publisher’s description of the book, Guinier believes that “the merit systems that dictate the admissions practices of [elite colleges and law schools], are functioning to select and privilege elite individuals rather than create learning communities geared to advance democratic societies.”

Lani Guinier says U.S. needs reform and should learn from other democracies