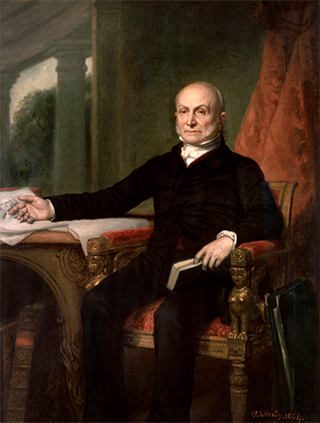 John Quincy Adams in a posthumous portrait created in
1858 by G.P.A. Healy.

Anyway, the topic is the power of family dynasty in U.S. politics. It’s embarrassingly big, this tendency to elect people from the same families, and awkward in a country that prides itself on the idea that any (native born) American can grow up to president.

That’s technically true, of course, but the odds have always favored the well-born. (The absolute same thing can be said about the cherished American belief that anyone can grow up to be rich, which must coexist with the unpleasant truth that socioeconomic mobility is higher in most European countries than in ours.)

Oh, and did I mention that Lincoln Chafee, one of Clinton’s few opponents for the Democratic presidential nomination, is the former governor and senator of Rhode Island and is the son of John Chafee, who likewise was senator and governor of Rhode Island? Linc Chafee’s great-great-grandfather was also governor — in the 1870s. And one of Jeb Bush’s leading rivals, Sen. Rand Paul, is the son of U.S. Rep. Ron Paul, who ran for the Repub nomination on the previous two rounds and once before that.

I should perhaps mention, before I get carried away noticing only the candidacies of those with family connections, that the presidential field is well-supplied with candidates of humble birth and/or a lack of family grandeur. I would also like to mention that Donald Trump, who was so, so tres gauche as to mention in his announcement statement that “I’m very rich,” did not choose to mention “I was born that way.”

I don’t know how the U.S. compares with other democracies in its tendency to elect members of rich and already-politically-successful families to high office. In “The Son Also Rises,” economic historian Gregory Clark argues that across cultures and across the centuries, “economic mobility rates are lower than conventionally estimated, do not vary across societies, and are resistant to social policies.”

Writing a few days ago on this general topic for the Washington Post’s The Fix feature, Hunter Schwarz  said that “in some ways, the benefits of getting into politics after your dad did are no different than the benefits in other industries. You’re related to someone you can turn to for career advice, and your last name might open a few doors, too. It’s just that in politics, it’s on a much larger scale. The doors your last name can get you into can lead to big campaign donations and votes. It’s a ticket to entry that most mere mortals struggle to obtain.”

But Schwarz links to this earlier New York Times op-ed piece by economist Seth Stephens-Davidowitz, who actually crunched the numbers and concluded that the odds that you will become a U.S. senator are 8,500 times better if you had a parent who was a U.S. senator.

How much nepotism is there in U.S. politics?