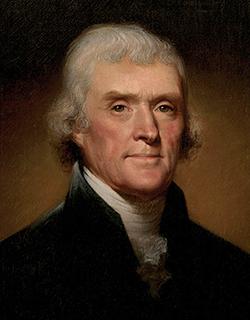 Portrait of Jefferson by Rembrandt Peale

I was perfectly happy to see the trend of southern states removing the old Confederate battle flag from various places of honor (most notably, the South Carolina Capitol building in the aftermath of the hideous murders of black congregants at a Charleston, S.C., church).

Really perfectly happy. Agreed with the decision. It may have been a symbol of some other things as well, but that flag was certainly a symbol of slavery, and it’s hard to go overboard denouncing the brutal depravity of that institution. It also symbolized the century and a half of resistance to equality in the aftermath of slavery.

But it also crossed my mind (and not for the first time) that when we engage in the cleansing of our historical honor roll it’s not always easy to know where to start and stop. Apparently, for many state Democratic Party organization, it doesn’t stop before taking two (formerly) revered figures down a peg.

State Democratic Party organizations (although not the DFL in Minnesota) have for about a century held an annual celebration called the Jefferson-Jackson Dinner, honoring former Presidents Thomas Jefferson and Andrew Jackson, each of whom bore some claim to being the father of what eventually became the Democratic Party.

(Brief aside on the double-father-of-the-party bit. The Republican Party burst fairly full-bloomed as a national party in the mid-1850s and fielded its first presidential candidate in 1856. If you know who that candidate was, give yourself a presidential history Brownie point. OK, it was Gen. John C. Fremont, and he made a respectable second place showing in a three-way race.

(But, in contrast, the exact moment when the Democrat Party, as we know it, came into existence is much more complex. The party label under which Jefferson, Madison, Monroe and John Quincy Adams were elected as the third, fourth, fifth and six presidents was — maddeningly, for today’s purposes — the Democratic Republican Party. Jackson also won his first term as president as a Demo-Repub — basically, there was no other party during this period — but then Jackson won his reelection in 1832 labeled as a just plain “Democrat” and a party under that name has finished first or second in every presidential election since. Anyway, the Dems have generally been happy to trace their roots to both men and during the 20th century to name their annual state party banquet the Jefferson-Jackson dinner.)

Jefferson, of course, was famous for his beautiful prose, including the bit about all men being created equal and endowed by their creator with inalienable rights of life, liberty and the pursuit of happiness, but also for his hypocrisy on that point by financing a really very, very grand lifestyle on the backs of slave labor and even, as the DNA testing finally proved beyond the rumor level, for using female slaves for sex.

Jackson was also a slaveholder and added brutal policies toward Native Americans that at least border on genocide. 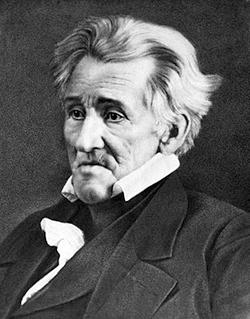 And yet there they were (and still are) brazenly adorning the $20 bill (Jackson) and the nickel (Jefferson on the front and his house on the back) and there they were (but are quickly being dropped) as the namesakes of the annual celebration of the state chapters of the party that — at least in recent history — has been the party of civil rights.

According to Tuesday’s New York Times, “the Iowa Democratic Party [recently] became the latest” to decide to unname its annual dinner after Jefferson and Jackson. The Iowans will go with the old name one more time, this year, then begin a “very inclusive” process of figuring out a new name in time for next year.

“Iowa joins the Dems of Georgia, Connecticut and Missouri in jettisoning Jefferson and Jackson” and, the Times said, “at least five other states are considering the same change since the massacre in June at an African-American church in Charleston, S.C.”

To tell you the truth, I’m fine with this, too. I prefer balanced, well-informed knowledge of history to  ancestor worship. But Jefferson is so high in the American pantheon that I would expect the Republicans to make some hay out of this. Fine. At least we’ll be talking about history and (I assume) no one will be apologizing too hard for slaveholding.

Oh, and don’t forget the effort to unname Lake Calhoun after the great slavery apologist and nullifier John C. Calhoun.

Of course, George Washington was a slaveholder too and an Indian fighter. And crazy cranks like me even know some dirt on Abe Lincoln (although, frankly, none of it remotely approaches the issues raised against Jefferson and Jackson). So, while I sympathize with the name-changing impulses, I wish I knew how to maintain some kind of balanced perspective.

So I mentioned that Minnesota didn’t have this problem. For much of its history, the state Democratic Party also held an annual Jefferson-Jackson dinner. And after the merger with the Farmer Laborites, the state DFL continued the tradition. But just as Hubert Humphrey (whom we might easily call the “father of the DFL”) was dying in the late 1970s, the party decided to change the name to the Humphrey Dinner.

I was brand new in Minnesota and not yet wise to its wonderful ways, and I don’t remember the event, but as I started working on this little diatribe, I found myself wondering whether Minnesota DFLers may have been way ahead of the curve in wishing to distance themselves from the unsavory aspects of the Jefferson and Jackson story.

As best I could tell in one day of calling around to old DFL hands who were in the picture at the time, the answer is no.

Hank Fischer, who chaired the party a bit before Humphrey replaced Jefferson and Jackson as the event’s namesake, said he didn’t recall any such motive. “It was much more about honoring Humphrey than about anything to do with Jackson and or Jefferson, at least that’s my best recollection.” He said there had long been some critics of Andrew Jackson over his policies toward Native Americans, but he doesn’t recall anything but respect and admiration for Jefferson back then.

Mary Monahan, who was in the DFL hierarchy at the time and became the chair soon after the name change was adopted, had the same recollection. Long-time DFLers were laid low by Humphrey’s final illness. “It seemed to me it was all of a sudden — like a light bulb went off — let’s name it for Humphrey,” Monahan said. And so they did, without much meaning to distance themselves from historical crimes of the old namesakes.

Five years ago, with Walter Mondale still among us as the consummate elder statesman, another light bulb went off (or does one mean “went on”?) and the party added his name to what this past June was “Fourth Annual Humphrey-Mondale Dinner.

Democrats take Thomas Jefferson and Andrew Jackson down a peg