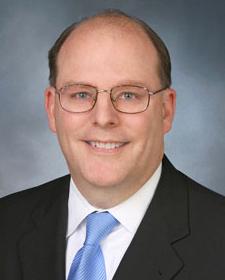 Peter Wehner, who served in the administrations of the last three Republican presidents (that’s two Bushes and one Reagan) and who says he has voted for every Republican nominee during his adult lifetime, was one of the first prominent Republicans to publicly declare that he would not vote for the Republican nominee in 2016 if that nominee is Donald Trump.

He made this announcement, rather prominently, in a Jan. 14 op-ed column in the New York Times, for which he writes frequently.

In a talk at the University of Minnesota’s Humphrey School Tuesday, he loaded up a fat paragraph describing Trump with strong adjectives, several of them less-than-flattering. It went like this:

“Mr. Trump is a toxic figure in American politics. If you want to know how toxic he is, he has a 70 percent unfavorable rating right now. And that would make the him most disliked nominee in the history of polling. Neil Newhouse, a veteran Republican pollster, said that ‘In the modern polling era since World War II, there has not been a more unpopular potential presidential nominee than Donald Trump.’ Mr. Trump is toxic for a reason. He is — in my estimation — nativist, xenophobic, cruel, vindictive, emotionally unstable, narcissistic, obsessive, and yet, he is without an economic agenda or a governing philosophy. He’s stunningly ignorant on issues and he seems to be a person who’s given over to profanity and demagogy…

“So count me neutral on Trump,” Wehner concluded to laughter from the Humphrey School audience.

Other than an unwillingness to support his party’s nominee, Wehner is a loyal Republican. He said he would support Sen. Ted Cruz if Cruz wins the nomination on the second or third ballot in Cleveland in July. He doesn’t prefer Cruz and expects Cruz would likely lose the election in November. But he’s a loyal enough Republican to go along with someone he disfavors, just not someone he detests.

And although he believes his party will, for the first time since 1948, lose a third consecutive presidential election, he made a pretty convincing pitch for the claim that on all but the presidential level, Republicans are the “governing party” of the United States. It went like this:

Republicans currently control the U.S. House by a large majority, the U.S. Senate by a smaller majority, the governorships of 31 of the 50 states and majorities in 70 percent of state legislative chambers around the country. Aside from the two victories of Barack Obama in the 2008 and 2012 presidential elections, Democrats have lost ground in the portion of government power they control at all other levels of government during the Obama years, Wehner said.

Looking ahead, however, Wehner sees danger for that “governing party” status because of the changing demographic of the United States. Republicans continue to get big majorities of white votes. In 2012, Mitt Romney carried the white vote by 20 percentage points, but lost because Obama carried the non-white vote by a 63 percentage point margin. In 2012, non-whites made up 26 percent of the electorate. By November’s election, he estimated, that could rise to 30 percent.

To sum up, he said, “Republicans are doing worse and worse among groups that are growing” as a portion of the electorate. The party needs a new agenda, new issues, new faces and a new message to non-white voters, which he described as “at a minimum, we don’t hate you. Even better: We like you and we want you.”

Prominent Republican makes his case against voting for Trump