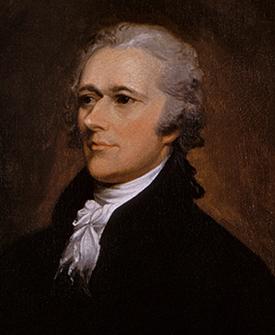 A great many Republicans have publicly sworn never to support Donald Trump for president. We’ll leave their reasons for another day, but you know some of the reasons. They made those pledges when they still believed it was possible to prevent him from becoming the actual nominee of their party. Now that belief has turned to grief. And some of them will decide to come around.

From the other side — those who will remain members of the Republicans Against the Republican Nominee caucus — you will start hearing references (they’ve already begun) to a remark made by Federalist Alexander Hamilton in the run-up to the election of 1800 when the Federalist nominee, President John Adams, was seeking a second term.

Here’s the quote, which Hamilton put in writing to his Federalist co-conspirators and the accuracy of which is not in dispute and which will, in a sense, be the motto of those Republican Never Trumpers who decide to remain Never Trumpers:

Hamilton: “If we must have an enemy at the head of Government, let it be one whom we can oppose, and for whom we are not responsible, who will not involve our party in the disgrace of his foolish and bad measures.”

How, in the early days of the Republic, did things come to this pass?

Hamilton — a top aide to George Washington, a military hero, the nation’s first Treasury secretary, and one of the most influential members of the Federalist Party — despised Adams for various reasons stretching across policy differences and personal grudges. (The feeling was mutual.)

Hamilton decided he would rather see his long-time political enemy, Thomas Jefferson — the leader of the opposition, then known sometimes as the Anti-Federalists, sometimes as the (don’t freak out) Democratic Republican Party — in the White House than Adams. (The White House, by the way, had only just opened for business, as had the city of Washington.)

Jefferson and Hamilton, who had served together in George Washington’s cabinet, also hated one another, which made it even more awkward for Hamilton to oppose Adams. Hamilton first tried a scheme that was designed to sabotage Adams in the Electoral College and bring about the election of Adams’ running mate.

(At this stage, the electors cast two ballots, but didn’t designate which one was for the person they wanted for president and which one for vice president. You can see the potential for mischief. That situation was improved by the adoption of the 12th Amendment in 1804.)

But when that Hamiltonian scheme faltered, Hamilton decided he would rather see Jefferson defeat Adams. And he encouraged his faction of the party to do what they could to bring that about, which led him to write the quote above to his co-conspirators.

You can easily see why some Republicans would rather have even Hillary Clinton in the Oval Office (and then spend the next four years blocking everything she tries to do) than have Trump (the fake Republican and colossal jerk) hold office in the name of their party, which would leave them constantly torn between the normal expectation of loyalty to a president of your own party and their hatred of Trump the blowhard who hijacked their party’s nomination.

If you want to know more about how Adams and Hamilton came to such a pass, there’s a pretty good account of it here and a shorter version at the end of this piece. The Hamilton quote is also featured in this Washington Post article about the dilemma of the Never Trump crowd.

Why Republican Never Trumpers are turning to Alexander Hamilton for guidance