The Right Honorable Donald J. Trump is seeking a new low. And I believe he is finding it in a form of McCarthyism worse than the version Joe McCarthy practiced.

Mr. T is implying that President Obama is a secret Muslim who is either in cahoots with terrorists or perhaps just sympathizes with them.

If he has any evidence of this theory, he should certainly own it, put it out there, say what it is. But, of course, there is no evidence. And Trump lacks the guts or the honesty to plainly state what he so clearly implies when he says things like this, on “Fox & Friends” Monday morning, in the aftermath of the horrible massacre in Orlando:

“Look, we’re led by a man that either is not tough, not smart or he’s got something else in mind.”

Earlier in the interview, when he was asked about a recent Tweet in which he had said that Obama should either start using the phrase “radical Islamic terrorism” or “resign in disgrace,” Trump said: “He doesn’t get it or he gets it better than anybody understands. It’s one or the other.”

Hmmm. What might Trump mean by “or he gets it better than anybody understands?”

Later Monday, Trump went on the righty radio show of his friend Howie Carr. Carr, to his credit, tried to get Trump to say what he was implying. Replied the Trumpster: “Well, you know, I’ll let people figure that out for themselves, Howie.”

Really? Why? If you think you know something, something incredibly important for every American to know, something like that their president is in sympathy with or perhaps actually in cahoots with ISIS or other terrorist organizations, why would you, a great, fearless tell-it-like-it-is America-loving patriot like you, hesitate to tell America what it is that you know or think you know about Obama’s true loyalties and goals?

Could it be because you have no evidence but also lack the common decency and lack respect for America’s ability to see through your smarmy implications?

No wait. I was wrong. Howie pressed Trump further and Trump did offer evidence. Here it is, lifted from this Talking Points Memo piece on Trump’s radio appearance:

“There was certainly not a lot of passion,” Trump told Carr of Obama [referring to Obama’s public statements in the aftermath of Orlando]. “There was certainly not a lot of anger. So, you know, I’ll let that, we’ll let people figure it out. But it’s very, very, it’s a very sad situation when we have the kind of a tragedy that we had and we have a president that gave a press conference and talks about gun control. Well this was a licensed person, who could have had a gun anyway.”

Trump went on to say that Obama wants to take the guns away from people so “the bad guys will have the guns, the good guys won’t.” 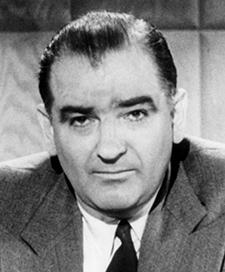 So there’s the evidence.

This is worse than McCarthyism. Sen. Joe McCarthy sought to identify Communists and Communist sympathizers (“fellow travelers”) whom he believed had infiltrated the U.S. government. He was a jerk and bully. But there were Communists and he used the forum of a congressional committee to out some of them. The accused were asked questions and had lawyers. I won’t get into a long sympathetic aside about McCarthy, for whom I have no sympathy, except to say that he confronted the people he was accusing and put his evidence on the table. And he was clear about what he was alleging.

Trump does none of the above. He is implying — and implying very clearly — that President Obama is a traitor and an agent for a violent foreign America-hating belief system. He won’t even own it, let alone back it up.