One of the recurring refrains of the Republican convention is that Hillary Clinton said, about the deaths of four Americans at Benghazi, “What difference does it make?”

It is suggested that these five words alone disqualify her from ever being president. It comes up all the time. Mike Pence, in his big speech last night (to which I gave generally good marks) used the quote this way:

It was Hillary Clinton who left Americans in harm’s way in Benghazi. Then she said, “What difference at this point does it make?”

As the proud father of a United States Marine, let me say from my heart: Anyone who said that, anyone who did that should be disqualified from ever serving as commander-in-chief of the Armed Forces of the United States of America.

This is certainly a big lie, of a sort, although, like many such lies, it has a grain of truth that makes it possible for those engaged in “motivated reasoning” or “motivated thinking” — those who are not interested in the real truth — to believe it. It was used against Clinton by many of the Republicans who ran for the nomination.

Hillary Clinton never ever said that the deaths of four Americans, including U.S. Ambassador to Libya Chris Stevens, were of small concern to her. There is no basis for asserting that she felt that way about it. In fact, her question, “What difference at this point does it make?” was not a statement about their deaths. It was a statement made in answer to a question about why she didn’t call the survivors of the attack in the hours or days immediately afterward, to ask whether the attack had begun as a spontaneous outburst of violence by Libyans upset about a controversial video or whether it was an orchestrated attack by a militant group.

It was the latter. It was an organized attack. Five days after the attack, U.S. Ambassador to the U.N. Susan Rice went on several Sunday news shows and — relying on talking points that had been prepared by the CIA — suggested that the attack was spontaneous, in reaction to the video. That was the White House’s public position at the time.

If there was any truth to that, there was very little. The attack that killed the four Americans was organized and planned by Ansar al-Sharia, which the CIA classifies as a terrorist organization. What Rice said, based on the CIA briefing documents, was false. Clinton has since said that she also believed at the time what the CIA documents said, but now understands that it was false.

It took several days before the administration gave the more accurate account of how the attack occurred. Rice, Clinton (who was secretary of state at the time) and the administration in general have taken a lot of grief over the early, incorrect CIA version of how the attack occurred. Critics assume that the administration was intentionally misleading the public, for political reasons, about the cause of the attack. (This actually led to a slightly famous exchange during one of the 2012 presidential debates. Mitt Romney accused President Obama of having waited 14 days to acknowledge that the attack was terrorism. Obama said that was wrong, and he had used the word “terror” on the day after the attack. And that checked out. Obama used the word “terror,” although he stopped short of stating clearly that the Benghazi attack was “terrorism.”

But, if you recall, this started out to be about Clinton’s famous “What difference at this point does it make?” remark. 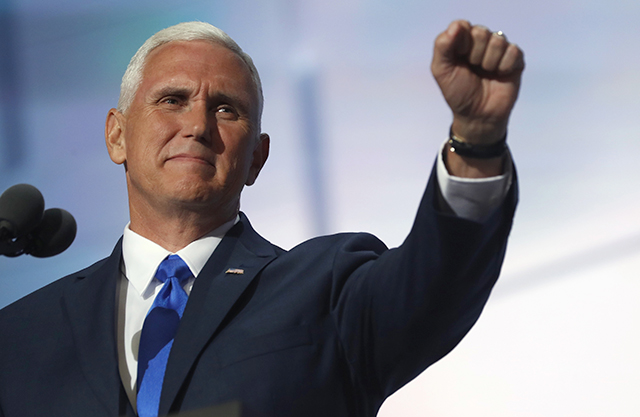 REUTERS/Jonathan Ernst
Indiana Gov. Mike Pence during Wednesday night’s speech: “It was Hillary Clinton who left Americans in harm’s way in Benghazi. Then she said, ‘What difference at this point does it make?'”

That occurred during a Senate Foreign Relations Committee hearing a year and a half after the Benghazi attacks. Wisconsin Republican Sen. Ron Johnson pressed Clinton to say why, in the hours or days after the attack, she did not call some of the Americans who had survived the attack and been evacuated from Benghazi and ask them whether the attack was organized or grew spontaneously out of a protest.

The exchange, which you can watch for yourself, is annoying, as Clinton and Johnson seem to talk past each other. She keeps trying to explain what she did in the days, weeks and months afterward to learn more about the attack and what lessons can be learned going forward. Johnson keeps insisting that she explain why she didn’t call the evacuees, within hours or days of the attack, and ask them what they knew, which led her to finally lose her composure and say to Johnson:

With all due respect, the fact is we had four dead Americans. Was it because of a protest or was it because of guys out for a walk one night who decided that they’d they go kill some Americans? What difference at this point does it make?

It is our job to figure out what happened and do everything we can to prevent it from ever happening again, Senator. Now, honestly, I will do my best to answer your questions about this, but the fact is that people were trying in real time to get to the best information. The IC has a process, I understand, going with the other committees to explain how these talking points came out. But you know, to be clear, it is, from my perspective, less important today looking backwards as to why these militants decided they did it than to find them and bring them to justice, and then maybe we’ll figure out what was going on in the meantime.

If you’d like to watch the Johnson-Clinton committee hearing exchange, it’s viewable on YouTube here. You can read more of the outburst in context in this 2013 Politifact analysis.

You may agree with Johnson that she should have called the evacuees. You may find various things Clinton said or did annoying. You may view her outburst at Johnson as uncalled-for. But it is simply impossible to view her “What difference at this point does it make?” outburst as reflecting in any way a cavalier lack of concern about what happened to result in those four deaths.

That’s why, however tempting it must be if you are a Republican, it is deeply wrong and even dishonest to keep recycling that quote out of context to make it look like Clinton was saying that she didn’t care.

Johnson, by the way, who is in a tough re-election battle this year against Democrat Russ Feingold, is proud of provoking Clinton’s outburst and used some of his time at the podium on day two of the Republican convention to say:

I am the guy who provoked that infamous response from Hillary Clinton by asking a simple question: “Why didn’t you just pick up the phone and call the survivors?”