Both major party presidential nominees gave yesterday what I suppose will be called “major addresses,” but I didn’t hear much that I considered new or interesting, and both reminded me of some of my biggest reservations about each of them.

Donald Trump flew to Mexico in the morning for a weird, awkward, substanceless joint appearance with Mexican President Enrique Peña Nieto (which mostly produced a small controversy about whether Peña Nieto told Trump off-camera that Mexico will not pay for Trump’s border, as he claimed, or whether the subject of who will foot the bill never came up, as Trump claimed).Then Trump flew to Phoenix for a prime-time speech on immigration policy that broke no new ground.

He still did not  completely clarify his latest thinking on his probably-expired primary season pledge to round up and deport the estimated 11 million undocumented aliens living in America. He wants to deport those who have committed other crimes on U.S. soil, but the speech was quite consistent with the assumption I wrote about yesterday that he is no longer serious about the mass deportation of the estimated 11 million whose only crime was crossing the border illegally. On the other hand, he added that “anyone who has entered the United States illegally is subject to deportation. That is what it means to have law.” But the language doesn’t clarify the limits of his goal. Those who entered illegally have always been “subject to deportation,” but millions have been in the U.S. illegally for years and even decades without being deported, so we still don’t know how far President Trump would go to track down and forcibly remove the 11 million.

He also said that he would put a priority on deporting those who came into the United States on a legal visa, and then simply didn’t leave when the visa expired. That is different from the group who simply snuck across the border without a visa and stayed in the United States, in some cases for many years or decades. I don’t know the rationale for prioritizing the visa overstayers for removal ahead of the border jumpers. But the Washington Post story on the speech said experts on the matter believe about 4.5 million of the estimated 11 million undocumented aliens living in the United States came here on visas.

The “First Read” memo issued every morning by NBC News says  “we now have absolute clarity where Donald Trump stands on immigration after a week of uncertainty and mixed messages,” but I disagree. To me, it seems that Trump still has not clarified his plan sufficiently.

Several Latinos who had been actively supporting Trump until yesterday announced after the speech that they were resigning from the pro-Trump organizations they had joined, Politico reported:

Jacob Monty, a member of Trump’s National Hispanic Advisory Council, quickly resigned after the speech. Another member, Ramiro Pena, a Texas pastor, said Trump’s speech likely cost him the election and said he’d have to reconsider being part of a ‘scam.’  Alfonso Aguilar, the president of the Latino Partnership for Conservative Principles, said in an interview that he is “inclined” to pull his support.

“I was a strong supporter of Donald Trump when I believed he was going to address the immigration problem realistically and compassionately,” said Monty, a Houston attorney who has aggressively made the Latino case for Trump. “What I heard today was not realistic and not compassionate.”

He withdrew from the board following Trump’s speech in Phoenix.

During the speech, Trump reiterated his opposition to any amnesty program that would give those otherwise-law-abiding long-time U.S. residents a “path to citizenship” unless they leave the country first and then apply for legal re-entry.

A transcript of Trump’s speech is here. 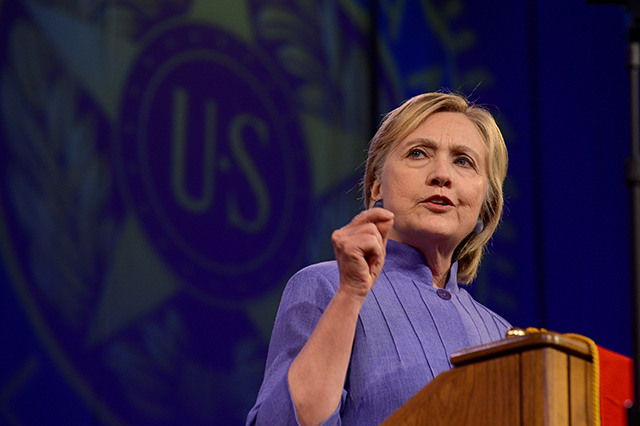 Hillary Clinton got much less attention for her major address, earlier in the day, to an American Legion audience in Cincinnati.

Her speech was chock full of sly backhanded insults to Trump, although I believe she only mentioned his name once, and referred to him several times namelessly as “my opponent.” As in: “My opponent is wrong when he says America is no longer great.” She fairly successfully painted Trump as reckless, ignorant and weirdly pro-Putin.

She bragged about being in the situation room with President Obama when Osama bin Laden was killed. She didn’t spend any time responding to any of Trump’s efforts to portray her as a corrupt incompetent. She didn’t discuss or apologize for her 2002 vote to authorize the war in Iraq (although she has, previously but belatedly, acknowledged it as a mistake) and she went on at some length about her belief in “American exceptionalism” without seeming to acknowledge any of the many mistakes and slaughters that have been justified by that phrase.

Regular readers of this space might recall that I have a big problem with “American exceptionalism,” a phrase that is used to excuse our tendency to get into more wars and overthrow more foreign governments than anyone else.

Seven mentions of how exceptional we are jammed into this Clintonian passage of yesterday:

If there is one core belief that has guided and inspired me every step of the way, it is this: The United States is an exceptional nation. I believe we are still Lincoln’s ‘last best hope of earth,’ still Reagan’s shining city on a hill, still Robert Kennedy’s great, unselfish, compassionate country. And it’s not just that we have the greatest military or that our economy is larger than any on earth, it is also the strength of our values, the strength of the American people, everyone who works harder, dreams bigger and never, ever stops trying to make our country and the world a better place.

And part of what makes America an exceptional nation is that we are also an indispensable nation. In fact, we are THE indispensable nation. People all over the world look to us and follow our lead. My friends, we are so lucky to be Americans. It is an extraordinary blessing. It is why so many people from so many places want to be Americans. But it is also a serious responsibility. The decisions we make and the actions we take, even the actions we don’t take, affect millions, even billions of lives. You know that. You have seen it. Now, all of this may seem evident has said very clearly that he thinks American Exceptionalism is insulting to the rest of the world. In fact, when Vladimir Putin, of all people, criticized American Exceptionalism, my opponent agreed with him, saying: If you are in Russia, you do not want to hear that America is exceptional.

Well, maybe you don’t want to hear it, but that doesn’t mean it is not true. My opponent misses something important. When we say America is exceptional, it doesn’t mean that people from other places don’t feel a deep national pride, just as we do. It means that we recognize America’s unique and unparalleled ability to be a force for peace and progress, a champion for freedom and opportunity.

Our power comes with a responsibility to lead humbly, thoughtfully and with a fierce commitment to our values, because when America fails to lead, we leave a vacuum that either causes chaos for other countries, or other countries or networks to fill the void. No matter how hard it gets, no matter how great the challenge, America must lead.

There may be some poetry in there; there certainly are a couple of digs at her unnamed “opponent,” but, taken as a whole, when I read a passage like that, I hear war (or wars) a-coming. It would be interesting to hear them through the ears of someone from Vietnam or Iraq, or even American veterans of the wars in those places.

Here is New York Times coverage of the Clinton speech.