The quote is usually attributed (so far as I know, correctly) to former Sen. Daniel Patrick Moynihan: “Everyone is entitled to his own opinion, but not to his own facts.”

It’s brilliant, but not really true, depending on how hung up you get on the meaning of “entitled.” The sad reality is, if you want to believe something enough, you can find a fact or two to back it up, and then you can disregard the perhaps 10 or 100 facts that tend to rebut your preferred belief.

And even that analysis assumes that you can find a fact or two that actually deserves the name “fact,” in the sense of being objectively “true” or at least “accurate.” If you are sufficiently motivated to believe something that is flatly untrue, you can subscribe to some facty-seeming half-truths or even falsehoods. Polls suggest, for example, that a large portion of Republicans believe that President Obama is a Muslim, a belief for which there is no evidence worthy of the name “evidence.”

I’m not recommending at all this system of believing whatever you want to believe. Whatever the opposite of recommending is what I’d like to do to that kind of “motivated reasoning” that allows you to come — factlessly if necessary — to some pre-ordained conclusion that makes you feel good. I’m just suggesting that there’s a lot of this going on.

Journalism, in, let’s say, the glory days of  the “objectivity” model, was obsessed with facticity. I came up in the business in those days and we were taught that everything in the newspaper, except on the editorial page where opinions were allowed, should be a factitious fact. (Reporters were allowed to quote people giving their opinions, as long as it was a “fact” that the person quoted had said the words quoted.)

In retrospect, it was sort of a silly conceit that such boundaries could be enforced. And, for most of my life-in-newspaper decades, we were subjected to the argument by our critics that, since reporters were themselves mostly liberals (a fairly factitious fact, by the way), our choice of facts was itself a dishonest form of opinionizing (a less true, but not totally false view, in my mind).

Anyway, that model is pretty well broken, as is the near-stranglehold of professional reporters over what information reached the general public, since the advent of the World Wide Web and subsequent technologies, like Facebook and Twitter and even the blogosphere in which I peddle my wares. Personally, I can live with the end of the old model, in part because it didn’t really work, although I’m not sure the new model is, on balance, an improvement.

During the late days of the old model, a new wrinkle appeared, and I liked it: The fact checkers. The facticity of certain purported “facts” was, let’s say, overrated. Some purported facts were actually just false. But a much larger portion were half-true or three-quarters-true and a person who really wanted to understand which parts were which needs help sorting it out. This led to the creation of the fact checkers.

FactCheck and its copycats

As far as I know, the modern fact-checking industry started in late 2003 when esteemed journalist Brooks Jackson was recruited by my friend Kathleen Hall Jamieson of the Annenberg Public Policy Center to start FactCheck.org. Jackson had worked for a while at CNN doing fact-check-like pieces, mostly on campaign ads. FactCheck turned it into a year-round operation of separating the true from the half-true to the utterly false, although unlike subsequent operations, FactCheck doesn’t award ratings with cute names. 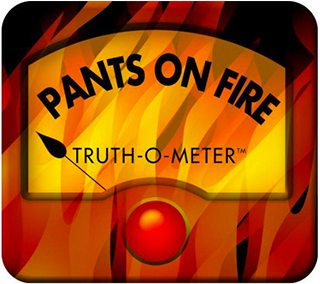 Lots of copycats have followed, notably PolitiFact and the fact checkers at the major newspapers, most of whom have rating systems for “facts” they check that run from “True” to “Pants on Fire.” (That’s PolitiFact). The Washington Post fact checker gives out one to four “Pinocchios.” Cute, eh?

Me, I don’t care for the ratings, which can certainly seem arbitrary, which is one reason FactCheck.org remains my favorite. It puts a statement under the microscope, highlights what’s known to be true and false about it and, generally, elevates your understanding of the entire matter under discussion.

I often learn more from a good fact check of an ad or a controversial statement than I do from the original coverage, although I think the fact-checking ethic has spread into a general awareness among reporters, especially political reporters. That ethic leads them more often to call out falsehoods and put out a better version of the truth.

During Monday night’s debate, Hillary Clinton announced early in the evening that her campaign would be live fact checking Donald Trump’s falsehoods on her campaign website and urged viewers to go there to get the truth. That’s fine, as a piece of political theater or propaganda. And I agree with the suggestion that Trump is a major liar. But you’d have to be pretty deep in the tank for Clinton to think that her campaign staff will be fair, reasonable or even honest about everything Trump says. And you have to be even deeper to think that anything of questionable truthfulness that Clinton says will get a tough but fair treatment on Hillary.org.

Here is Factcheck.org’s excellent fact check of the debate. (It starts off, by the way, with a falsehood by Clinton.)

I have the feeling you would learn more facts, more reliably if you just read that piece and skipped the debate — plus you would be spared all the visuals and histrionics that generally take over one’s impression of such an event.

In general, Trump has set back the quest for truth quite a bit, not only by engaging in a fairly epic level of lying, but by demonstrating (to my considerable surprise) that such a level of contempt for truth-telling — or even a minimum level respect for factuality after the lies have been pointed out — is not disqualifying in a candidate for president.

That word, “disqualifying,” is used in a hoity-toity way by the Smart Set, often about Trump, to describe his various boorish behaviors and also his lies as “disqualifying” him from the presidency. But he’s done a pretty good job of demonstrating that the only way he will be “disqualified” is if he loses the election, and that turns out to be a decision not entirely up to the Smart Set.

On facticity, falsehoods and the rise of political fact checking