Hillary Clinton and Donald Trump didn’t exactly share a stage last night, but they sat on the same stage minutes apart but separately for a half hour each and answered questions that were designed to allow voters to compare their ideas about how to perform the commander-in-chief portion of the job of president.

It was a good idea. The outcome wasn’t that great, and I wonder whether many minds were changed. Moderator Matt Lauer probably spent too much of his half-hour with Clinton asking about the trouble with her emails. Some may (I wonder) find this topic endlessly fascinating. I don’t think there’s much left to learn. Clinton knows she blew it with the private server stuff. Luckily it appears no great harm was done to the national security. The underlying character flaw it may suggest about her may still be present (character is hard to change), but I’m sure she won’t make that particular mistake again if she becomes president.

I’ve heard the media berated lately for grading Donald Trump on the curve. That is, the allegation goes, we’ve become so inured to his recklessness, his hyperbole and his lying that we declare him to have done well if he tells fewer lies than usual and doesn’t insult the moderator or any major ethnic or gender groups.

By that standard, I suppose Trump had a good night. His big blunder was probably saying that under the Obama-Clinton regime, “the generals have been reduced to rubble.” That, one gathers, was his diplomatic way of excusing the generals for the many alleged failures of the U.S. military during the Obama-Clinton era, so he can focus all the blame on President Obama and Clinton personally.

Lauer pressed Trump on his dare-one-say ludicrous claim to know more about ISIS than any of the generals do. Trump has both claimed to have a plan for defeating ISIS (“bomb the shit out of them,”) and also to “take the oil.” On that score, you might note that such old-fashioned plunder would be a war crime under both international and U.S. law.

Trump said last night that although he does have his own plan for defeating ISIS, which he cannot divulge for fear of tipping off the enemy, he would also ask the generals for their plan and perhaps adopt theirs or combine the best elements of both.

Since the current top generals have long been associated with what Trump considers the failure of U.S. policy against ISIS, he said both that “the generals have been reduced to rubble” and that, when he was in charge: “They’ll probably be different generals.” Some of the post-debate commentators, including retired generals, were troubled by those quotes, both the disrespect of the “rubble” quote and the impression that Trump implied that the president promotes and fires generals.

As regular readers of this space may have detected, I am fairly obsessed with the 2002-03 decision to bomb and invade Iraq (on grounds – Weapons of Mass Destruction – that turned out to be nonexistent) as the signal blunder of U.S. military policy of the 21st century, so far. To me, shedding more light on how both the nominees came to support the war and what lessons they have learned from it would be the main point of a discussion of their fitness to be the commander in chief.

Until now, Trump has simply lied, consistently, doggedly, shamefully, and claimed to have opposed the Iraq war from the beginning. Clinton has, as the saying goes, “evolved” on the issue. As a senator, in 2002, she voted to authorize the use of military force against Iraq. Her floor speech explaining the vote was full of problems, which I elucidated here.

Clinton didn’t concede for many years that there was anything wrong with her 2002 vote, and only in her most recent book, written during the run-up to her current campaign, did she finally admit, of her 2002 vote: “I got it wrong. Plain and Simple.” 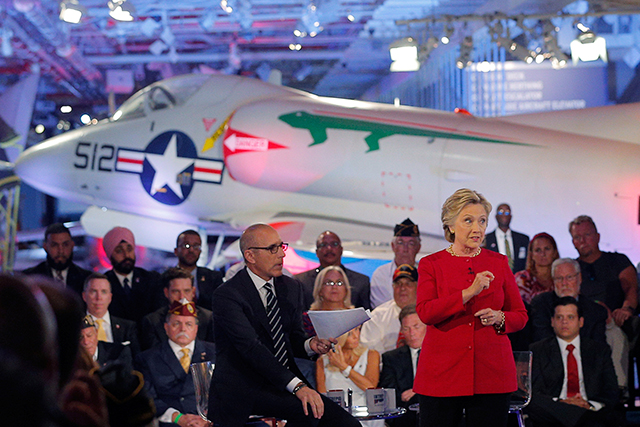 REUTERS/Brian Snyder
Hillary Clinton: “I think that the decision to go to war in Iraq was a mistake.”

The war vote remains my biggest complaint against Clinton’s record. I beg forgiveness of those who are sick of hearing about it. I’m not sure she has explained very well how she came to make that mistake, nor did she last night, but Lauer asked about it straightforwardly. Here’s the exchange:

LAUER: Secretary Clinton, let’s talk about your vote in favor of the war in Iraq. You’ve since said it was a mistake.

CLINTON: Look, I think that the decision to go to war in Iraq was a mistake. And I have said that my voting to give President Bush that authority was, from my perspective, my mistake. I also believe that it is imperative that we learn from the mistakes, like after-action reports are supposed to do, and so we must learn what led us down that path so that it never happens again. I think I’m in the best possible position to be able to understand that and prevent it.

But I will say this. I’m asking to be judged on the totality of my record, what I’ve done for our veterans as first lady, as senator, what I’ve done for Gold Star Families, working with them to increase the death benefit from $12,000 to $100,000, working with Republicans, like Lindsey Graham, to get TRICARE for our National Guard members who didn’t have health care unless they were deployed, working to provide more support for the care of our veterans, those who are wounded, working with the Fisher family, now into the third generation of caring for our fallen heroes, working with John McCain to raise money for Brooke Medical Center’s Intrepid Center to take care of those who are coming back with profound injuries, working on TBI and PTSD and so much more, working with groups to end veteran suicide, like TAPS. So, yes …

LAUER: I’m going to get on to that subject in a second.

This is still not the lessons-learned speech I would like to hear from her. She managed to work in a bunch of less relevant things-I’ve-done-for-members-of-the-military stuff, but not nearly enough (is there any?) of how-and-why-I-got-it-wrong-and-why-I-would-not-make-a-similar-mistake-as-president explanation I would like to hear. But that’s my hang-up/obsession.

She said at the end, accurately, that Trump “refuses to take responsibility for his support” for the war. She calls it a judgment issue. I would call it an issue of fundamental honesty. I’ve written about it before but I really cannot believe the gall of the guy to stick to his lie, which contradicts every bit of known evidence. This is beyond the usual political tap-dancing. Anyone who excuses this level of mendacity simply has no concern for accuracy or truth.

I don’t think of Clinton as a brave consistent truth-teller. But when one of her lies or half-truths gets exposed, she doesn’t just keep asserting it. Trump is shameless on this stuff and, sure enough, Trump did it again last night.

Soon after Trump came on stage (he followed Clinton), without even waiting for Lauer to confront him with what Clinton had said about his Iraq war lie, he brought it up himself, thus:

LAUER: What have you done in your life that prepares you to send men and women of the United States into harm’s way?

And I was against the war in Iraq because I said it’s going to totally destabilize the Middle East, which it has. It has absolutely been a disastrous war, and by the way, perhaps almost as bad was the way Barack Obama got out. That was a disaster.

I’ve been over this before so I’ll to be brief. The question of whether to attack Iraq was discussed throughout 2002 and into 2003. The bombing started in March of 2003.

Never said he was against it

Trump was publicly asked about the war several times before it started. He never said it was a bad idea. He never said he was against it. He never warned that it would destabilize the region. The closest he came to taking a position was when his friend the radio shock jock Howard Stern asked him, in September of 2002 (a month before Clinton cast her vote on the Senate floor), whether he favored invading Iraq. He replied:

Yeah, I guess so. You know, I wish it was, I wish the first time it was done correctly.

The Esquire interview he alluded to last night was in the August 2004 issue, a year and a half into the war, and even then, he didn’t say that the Iraq war was a mistake, nor had he yet invented the lie that he had been against it from the beginning. By then, a great many people knew that it wasn’t going as well as the Bush administration had expected and that no WMD had been found. But even then, as he described the war as a huge blunder, he didn’t claim to have been against it from the beginning, a lie he made up later.

For another more objective take on the evening, here’s the Associated Press account.