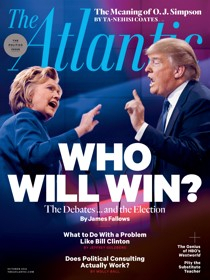 The Atlantic, one of America’s longest-running and most esteemed magazines, was founded in 1857, deeply committed to advocating for the abolition of slavery. In 1860, the Atlantic endorsed Abraham Lincoln for president, although Lincoln did not run as an abolitionist, believing that Lincoln’s election would do the most to advance that cause. I guess they got that right.

As the magazine grew in reputation through the decades, it didn’t make another presidential endorsement for a century. It’s not a fundamentally political publication, and it has no regular editorial page. In 1964, it broke that nonendorsing habit to endorse Lyndon Johnson over Barry Goldwater.

It was not a particular warmth for LBJ but a concern about the reckless hawkishness of Goldwater that moved it to break its century-long habit of not endorsing, especially Goldwater’s suggestion that field commanders should have access to nuclear weapons, with authority to use them if they felt it necessary. After that, the Atlantic went back to its nonendorsing habit for another 48 years.

Yesterday, The Atlantic announced that it would again, for just the third time in its 159-year history, make an endorsement in the current presidential race. It endorsed Hillary Clinton — again, as in its 1964 endorsement of LBJ, not because of an uncontrollable enthusiasm for Clinton but because of its alarm at the prospect of turning the executive branch over to Donald Trump. The editors wrote:

If Hillary Clinton were facing Mitt Romney, or John McCain, or George W. Bush, or, for that matter, any of the leading candidates Trump vanquished in the Republican primaries, we would not have contemplated making this endorsement. We believe in American democracy, in which individuals from various parties of different ideological stripes can advance their ideas and compete for the affection of voters. But Trump is not a man of ideas. He is a demagogue, a xenophobe, a sexist, a know-nothing, and a liar. He is spectacularly unfit for office, and voters—the statesmen and thinkers of the ballot box—should act in defense of American democracy and elect his opponent.

The editors expressed respect but not enthusiasm for Clinton:

Hillary Rodham Clinton has more than earned, through her service to the country as first lady, as a senator from New York, and as secretary of state, the right to be taken seriously as a White House contender. She has flaws (some legitimately troubling, some exaggerated by her opponents), but she is among the most prepared candidates ever to seek the presidency. We are confident that she understands the role of the United States in the world; we have no doubt that she will apply herself assiduously to the problems confronting this country; and she has demonstrated an aptitude for analysis and hard work.

Donald Trump, on the other hand, has no record of public service and no qualifications for public office. His affect is that of an infomercial huckster; he traffics in conspiracy theories and racist invective; he is appallingly sexist; he is erratic, secretive, and xenophobic; he expresses admiration for authoritarian rulers, and evinces authoritarian tendencies himself. He is easily goaded, a poor quality for someone seeking control of America’s nuclear arsenal. He is an enemy of fact-based discourse; he is ignorant of, and indifferent to, the Constitution; he appears not to read.