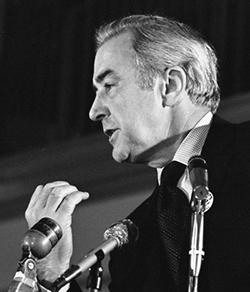 Until, perhaps, the year we have just been through (and we need some more history to play out before figuring out how big that was), the most chaotic, impactful year in American politics during my lifetime was 1968. And two Minnesotans were at the center of it.

The Vietnam war raged; American cities burned; Martin Luther King and Robert F. Kennedy were assassinated; President Lyndon B. Johnson shocked the world by deciding not to seek another term; and Richard Nixon — whose racist and militaristic dog whistles during the campaign bore some similarity to those that worked for Mr. Trump — was elected president. Nixon had claimed to have a “secret plan” to end the Vietnam War, but that turned out to be a lie.

One of the two Minnesotans was Hubert Humphrey, the long-time Minnesota U.S. Senator, who started the year as LBJ’s vice president, rose via completely unexpected developments to be the Democratic nominee (without, by the way, winning or even seriously competing in a single primary), and ended the year narrowly, at least on a national popular vote basis, losing the election to Nixon.

Forgive me, I meant to mention earlier why I’m blathering on about this today. It’s because the other Minnesotan in the thick of this story was Minnesota’s then-senior Senator, Eugene McCarthy, whose candidacy played a significant role in the larger story, and, according to some Humphrey supporters, cost Humphrey the election and gave the country President Nixon.

And (to finally connect to the present) a documentary about McCarthy’s 1968 candidacy, that has sorta been in the works since 1993, will air for the first time on PBS stations in Minnesota on Sunday night.

“Hi, Gene. Meet The Real Senator McCarthy” will run on PBS’ main local station, KTCA-Channel 2, on Sunday night at 11 p.m, with a few other showings (listed here) on some of TPT’s smaller stations over the next few days.

I liked the film. I recommend it, and it will bring back some memories to those who lived through 1968. But it’s an odd film for a couple of reasons. It includes plenty of archival footage from the 1968 campaign, then a bunch of interviews shot in 1993, 25 years after the events the interviewees are describing. Then the filmmakers put the project on the shelf, unfinished. Many of the key players in the story and most of those interviewed by the filmmakers in 1993 — including McCarthy and his wife Abigail and many others — have passed away.

Then the filmmakers dusted off the project and did additional interviews in 2015-16, with some of the still-surviving players in the story now looking back almost 50 years. The film benefits from the extra perspective of those looking further back, but it’s a strange amalgam of news footage from ’68, interviews from 1993, and still more interviews from 2015-16.

Support for the Vietnam war was broad but not deep when it started escalating in 1964 with the infamous Gulf of Tonkin Resolution. That resolution passed the Senate 88-2. Humphrey and McCarthy both voted for it. Hardly anyone except the two nay voters (Wayne Morse of Oregon and Ernest Gruening of Alaska) realized they were authorizing anything nearly as big as the Vietnam War. Moral of that story for future congresses: Be careful when you authorize military action that you aren’t giving away your power to decide what’s worth a war.

LBJ won his landslide 1964 victory over Barry Goldwater by portraying himself as the peace candidate. The Vietnam war wasn’t even front page news yet.

Over the next four years, opposition grew. McCarthy was not the most prominent or noteworthy opponent of the war, but his skepticism about it increased.

Two young war critics, Allard Lowenstein and Curtis Gans, got the idea of recruiting someone to challenge LBJ for renomination in 1968 by challenging the increasingly expansive and controversial war policy. 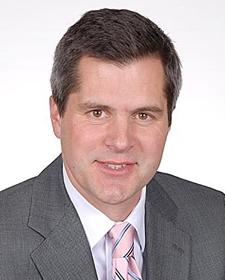 More prominent war critics than McCarthy, including New York Sen. Robert F. Kennedy, who had publicly proposed a bombing suspension and reduction of U.S. troops in 1967, and South Dakota Sen. George McGovern, who would run for president as an anti-war candidate in 1972, turned Gans and Lowenstein down. I assume they thought that running against Johnson in 1968 would be a political suicide mission.

McCarthy was not their first choice, and he also turned them down when Gans and Lowenstein first approached him. Then he changed his mind. There’s footage of McCarthy in the film, from one of the 1993 interviews, saying that he decided to do it because it needed to be done and no one else was willing.

The remark reflected a certain ambivalence, which came across in McCarthy’s style as a campaigner. McCarthy was witty and elegant, but also acerbic, cerebral, aloof and not particularly driven to knock on every door. Gans is quoted in the film saying that, “with Gene McCarthy, it wasn’t 12 events a day and glad-handing. With Gene McCarthy it was four events” (and then Gans drifts off without describing McCarthy’s enthusiasm — or lack of enthusiasm — for glad-handing).

Maybe I’m overly influenced by my own small exposure to McCarthy. He attempted a comeback in 1982, seeking the DFL nomination for Senate against Mark Dayton. Dayton was then just 35. I don’t know what made McCarthy do it. His career after his big 1968 campaign was a series of curious decisions, starting with not seeking another term in the Senate in 1970.

During that 1982 campaign, I interviewed McCarthy and spent some time on the trail with him. He generated neither energy nor magic.  He got crushed in the DFL primary by 69-24 percent. (Dayton went on to run a fairly close but unsuccessful race against the Republican incumbent, Dave Durenberger.)

As an admirer of McCarthy in my youth (I was in high school in 1968), I came away from my brief 1982 exposure to him with new doubts about him, and new understanding about why he fizzled. There’s another fairly brutal quote about McCarthy, also spoken by Gans but he attributes the remark to another campaign official, who said of McCarthy: “I never knew a man who demanded so much total loyalty and gave so little in return.”

But back to 1968. McCarthy’s showing in the New Hampshire primary rocked the political world. He actually finished second to a group of delegates pledged to LBJ. (This is often misremembered. Johnson’s slate got 50 percent of the vote. McCarthy got 42 percent.) But McCarthy way overperformed expectations, which contributed to LBJ’s decision soon after to announce that he would not seek another term.

And it led Bobby Kennedy to reconsider his decision to stay out of the race (RFK started rethinking a candidacy the day after the New Hampshire result, as the film makes clear).

LBJ publicly withdrew just days before 1968’s second primary (in Wisconsin). Kennedy wasn’t on the ballot but got a few write-in votes. McCarthy won with 56 percent. The political world was in shock.

After McCarthy and Kennedy were both fully engaged, they traded primary victories for a while. Humphrey became a candidate, but ran an insider’s campaign focused on states that didn’t have primaries. (He didn’t win any primaries, but in those days, most delegates were not chosen in primaries.)

The last big primary, in California, was set to determine whether McCarthy or Kennedy would go to the convention as the anti-war alternative to Humphrey. Kennedy won the primary but, as you probably know, was killed by an assassin that night.

By the time of the Democratic convention in Chicago, no one (including McCarthy, apparently) thought there was any chance of McCarthy defeating Humphrey for the nomination. Humphrey was nominated but the riot-marred convention left the party reeling. But, as you may also know, Humphrey made a pretty big comeback and closed to within hailing distance of Nixon late in the campaign.

The last part of the film, and perhaps the toughest for McCarthy admirers, involves McCarthy’s unwillingness to provide more than a lukewarm endorsement of Humphrey in the race against Nixon. There’s a brutal on-camera interview with Vance Opperman, the wealthy lawyer/publisher/businessman and long-time Democratic insider, who was in the picture when Democrats in the final weeks of the campaign were pleading with McCarthy to come out strong for Humphrey.

According to Opperman, McCarthy told the Humphrey folks that he would like to help but couldn’t do so until he completed a “very important assignment,” which he was working hard on and would be done with soon. McCarthy wouldn‘t disclose the nature of the assignment, Opperman says, but the secrecy was so great that Opperman supposed McCarthy was working to bring about a breakthrough toward peace in Vietnam.

It turned out that McCarthy had accepted an assignment from Life Magazine to write a piece about the World Series. And McCarthy did complete that. And, shortly before Election Day, McCarthy put out a press release, stating that he planned to vote for Humphrey. TV newsman Sam Donaldson turns up on camera in one of the 2015 interviews to describe the press release when it came in. It was just a press release that said he supported Humphrey over Nixon. McCarthy didn’t appear publicly with Humphrey or make any serious effort to deliver the support of any of his followers.

I don’t claim to know how much difference this made, or could have made if McCarthy had provided full-throated support. The documentary’s narrator says that “Even today, many of Humphrey’s supporters are still angry, even bitter, blaming McCarthy’s delayed and tepid support for Humphrey for the latter’s loss to Richard Nixon.”

But the filmmakers also included a statement from a long-time McCarthy campaign staff member who defended McCarthy’s lack of enthusiasm for Humphrey. McCarthy was keeping faith with his supporters, she said. Humphrey had not clearly repudiated LBJ’s war policy until very late in the campaign, and then only tepidly.

I had a chance to discuss the film briefly with Rob Hahn, the writer/director, and my own journey from a young McCarthy admirer to a grumpy journalist came across. After we hung up, he sent an email with some of his thoughts, so I’ll let him have the last word. Hahn wrote:

McCarthy’s opposition to the war grew as the war in Vietnam went on, and his opposition was not merely against the policy but the power structure, namely McNamara and the Pentagon, that enabled it (think Gov. Brown mentions something similar in the film).

Great political leaders are keen to spot an opportunity but also realize, as I believe was the case with McCarthy, that seizing that opportunity brings some great risks of failure. Having the guts to challenge LBJ, when other Democrats would not, is what separated McCarthy from his fellow politicians and made him a great leader for the moment in time.

Correction: The version of this story that went up this morning had the wrong year for when McCarthy ran against Mark Dayton for the DFL Senate nomination. It was 1982, not 1992 as the story now reflects.