There may be two-word slogans that capture a profound or wise thought. In my humble opinion, the Trumpian summary, “America First” is not one of them and seems especially suspicious coming from one who has clearly put his own interests – pecuniary, sexual, and especially ego-feeding – ahead of most other considerations.

But President Donald Trump has often said — and said again several times in his barely coherent, tone-deaf, self-promoting inaugural address — that “America First” summarizes the philosophy that will guide him as president, just as the two-word slogan was key to his rhetoric during the campaign.

I do agree that, as a rule of thumb and leaving room for any number of obvious exceptions, the leader of any nation ought to put the enlightened self-interests of his or her own nation – as a whole — ahead of the interests of any other nation. One could perhaps construct some examples where generosity, common humanity, or perhaps a conflict between narrow national interest versus global interests would complicate the calculation, since we not only inhabit our country but also our planet.

In the late 1930s and up to the bombing of Pearl Harbor, “America First” was the slogan of a group that wanted to keep the United States out of World War II. Minnesota’s own Charles Lindbergh was a leading spokesman for this group and this argument. History hasn’t treated Lucky Lindy kindly for this chapter of his public career, but nonetheless, the argument that decisions over the use of the U.S. military should be heavily guided by the national interest is close to unarguable.

Not that it’s always easy to calculate that interest clearly. I feel reasonably sure that President George W. Bush believed it was in America’s interest to invade Iraq in 2003. It didn’t turn out that way, at least as best we can tell from the vantage of 2017. President Barack Obama clearly thought it was a good idea to avoid entering whole-hog into any major new wars during his tenure. I think I agree but, when innocents were relentlessly slaughtered in Syria, for example, Obama was often criticized – by Trump among others — for not doing enough about it. Was Trump making an America First argument? If so, I don’t know what it was. Was he sloppily falling into the tendency to blame American presidents for everything bad that is happening in the world, without taking the trouble to do a cost-benefit analysis of America’s self-interest? Or was he just taking a four-legs-good, two-legs-bad cheap shot that everything bad in the world could and should be blamed on Obama and his erstwhile secretary of state? 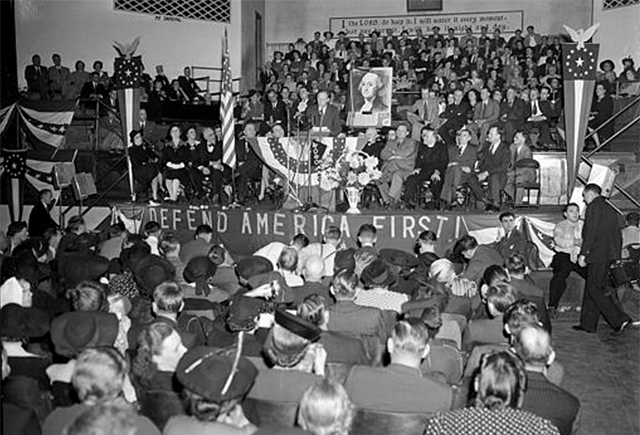 And lastly (to keep this short) most of the policy decisions an American president makes can’t be subjected to the “America First” motto because most of the issues pit the interests of one group of Americans against those of another. If you take from the rich (through taxes) to help the poor (through social spending), or if you decide not to do that, you are favoring some Americans at the expense of others.

To me, Trump’s “America First” sloganeering is just one more evasion of leveling with us about what he will actually do as president, wedded to one more effort to feed the frustrations of his political base, who – in the absence of a coherent explanation of costs and benefits – are invited to believe that their grievances are easily explained by the belief that the pre-Trump leaders have been putting someone first other than them, the real Americans.

What are we to make of Trump’s emphasis on ‘America First’?