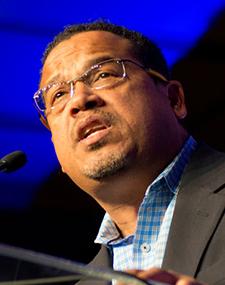 At a University of Minnesota forum Wednesday, Minnesota Rep. Keith Ellison of Minneapolis, the new deputy chair of the Democratic National Committee (after losing a close race for chair to Tom Perez), gave a folksy and feisty overview of how he sees the road ahead for Democrats after the party’s many staggering setbacks of 2016.

His basic message: Expand the Democratic Party and mobilize all progressives (including those who voted for the Green Party ticket in 2016) to unify behind the only party that can bring positive change for impoverished and working-class and middle-class Americans.

Sixty-three percent of U.S. households have $500 or less in savings, Ellison said; an average college graduate starts the next stage of life with $30,000 in student debt; the growth of the middle class has stalled. Making college more affordable and raising pay so every worker earns a living wage are key goals Ellison mentioned.

To strengthen his party so it can deliver on these goals, Ellison said, Democrats need to focus less obsessively on the quadrennial presidential election so they can focus more on elections at all levels and in all election years. Spend less time raising money to pay for TV ads to mobilize “likely voters,” and spend more time knocking on doors, connecting with and listening to and preaching the Democratic Party’s principles to “all voters,” which I took to mean all eligible voters including those who haven’t been voting. He argues that Democrats will have more success if they can mobilize nonvoters to become voters than they will trying to persuade Republicans to vote for Democrats.

“Money, to this day, still cannot vote,” Ellison said. “You still need a human being to do that.”

While expressing admiration for former President Barack Obama, Ellison also faulted Obama for not putting enough time and energy into building the Democratic Party, and, as a result, Ellison said, Obama’s “legacy is in danger” of being repealed by the Republican control of all branches of government.

Ellison said Donald Trump will turn out to be “perhaps the worst president ever,” because he is “openly hostile to core American values.”

Ellison took questions from from U of M political scientist Larry Jacobs, Pioneer Press reporter Rachel Stassen Berger, and written questons from the audience. Stassen Berger asked how the Democrats, as the party of big government that seems always want to make it bigger, can overcome the impression that the electorate thinks government has become too big, too intrusive, does too many things that should be left to private individuals or to the free market. He replied:

For a good illustration of how feisty and unabashedly liberal he is, I transcribed a passage of Ellison’s talk that reflects on an important aspect of our current politics, namely whether liberals and conservatives might need to edge toward the center in order to get things done. It starts with a Jacobs question:

Jacobs: You’ve talked about moving forward on human rights, protecting health care and other issues. How can you do that without demonizing Republicans and widening the partisan gap in Washington?

Ellison: I’m sorry, but I don’t mind demonizing somebody who’s trying to cut Meals on Wheels. I’m just not cool with that. I am not OK with cutting TRIO (a federal program that seeks to help those from disadvantaged backgrounds overcome barriers). I’m not okay with taking 24 million people off health care by 2026. And I’m not gonna sugar-coat it, and I’m not gonna say “Oh, well they have a good point, too.”  No. They don’t. Everybody should be able to have health care. So my deal is not to try to convince Republicans to become Democrats. My thing is to mobilize Democrats to get out and vote and engage in the electoral process.

If anything, I want to go to the Jill Stein voter and say: Look, y’know, I get that you’re frustrated with the Democratic Party. But there is no third-party escape here. We’ve gotta build the Democratic Party base. The United States, like it or not, is a two-party country. And you may think that’s too bad. But that’s the way it is now. There is no third-party escape.

I’m not casting aspersions. I’m not even criticizing them. But I’m trying to make it very clear to people that when Democrats lose elections bad things happen to good people. Like Planned Parenthood being threatened. Like Dodd-Frank being attacked. So you’ve got to get busy. You’ve got to get serious and realistic about where our political fortunes lie.