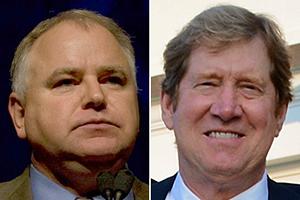 Unless it is your job to do so, it would be silly to obsess on the likely outcome of elections that are more than a year and a half away, including elections in which we don’t even know who the candidates will be.

But there are people whose job it is to do that, and some among us who are so obsessed that we can’t help but notice. Therefore, forewarned as you are that it’s silly to care, I’ll just let you know that Nathan Gonzales of “Inside Elections” (which was formerly named the Rothenberg Political Report) has released an overview of the 2018 U.S. House races in which he assesses the likelihood that control of each House seat will switch parties. So, for the eight-member Minnesota delegation, Gonzales soothsays as follows:

These ratings obviously take into account that Walz, a six-term incumbent DFLer who had a surprisingly close less-than-1-percentage-point win last November, will not be seeking another term because he has announced he will run for governor instead.

In the Second District, Lewis is in his first term and won that race by just 2 percentage points. But the Second District has been won by the Republican nominee in nine straight elections. I’m skeptical that it truly deserves toss-up status but I’m not a soothsayer.

Gonzales rates two more of Minnesota’s districts, the Northeastern Eighth and the far western Seventh, as “lean Democratic.” But these ratings should also be viewed with caution until the two incumbents clarify their plans.

The Eighth has a long history as a DFL stronghold (DFLers have carried it every election but one since 1946) but has been trending much redder over recent cycles. Further complicating the forecast, the current incumbent, Rep. Rick Nolan, is publicly considering running for governor and, even if he doesn’t do that, will be 73 on the next Election Day.

The tall, skinny Seventh District, which covers almost the entire western border of Minnesota, is really a solid-red district except that it really really likes its Blue-Dog DFLer incumbent, Collin Peterson. One of the most conservative Democrats in the House, Peterson has won every election since 1990, most by comfortable margins. But Peterson may be the only DFLer who can hold it, and he will be 74 on Election Day 2016. I suspect Gonzales, and everyone else who engages in such exercises, will change their rating for the race in a flash if Peterson decides to retire.

Minnesota’s Third District, covering the western suburbs of the Twin Cities, looks like a swing district by some measures. It has voted for the Democratic presidential nominee in the last three cycles. But in House elections, it loves moderate pro-business Republicans like Jim Ramstad and Erik Paulsen. Paulsen, the current incumbent, has won it five times by margins ranging from comfortable to landslide. The DFL often seems to think it can give him a scare and, perhaps in recognition of that, Gonzales rates it “Republican Favored,” which is the last, least competitive category he uses, except for those districts that are so solidly red or blue that he doesn’t bother to rate them at all.

Paulsen has been raising campaign funds aggressively and even spending it so far in 2017 faster than most incumbents. That could be because he’s worried, or because he wants to scare off likely competitors, or it might just be because Paulsen is really good at fund-raising. The Strib reported that “Paulsen … spent far more defending his congressional seat last year than any other Minnesotan in Congress: $5.8 million. Most of that was on media advertising — more than any of the 435 other members of the U.S. House, according to data compiled by the Center for Responsive Politics in Washington, D.C.” Paulsen is also wary about casting votes that might become controversial and is among the few Republicans at the moment who hasn’t said how he will vote on the current version of Trumpcare.

In the spirit of that last not-even-worth-rating category, Gonzales doesn’t provide a rating for the solidly Democratic Fourth (St. Paul) and Fifth (Minneapolis) where the incumbents Betty McCollum and Keith Ellison are viewed as prohibitive favorites if they seek another term. And the same (except in reverse partisan terms) for the Sixth District (biggest city: St. Cloud), which has elected three different Republicans and no Democrats over the last eight terms and where Gonzales apparently considers Republican incumbent Tom Emmer safe enough that he doesn’t bother rating the race.