Begging indulgence in advance, I’m sharing a personal anecdote today that relates to Al Franken and me and Franken’s 2008 Senate campaign, and his new book — and it contains the F-word, which I have never previously attempted to smuggle into print. So if that’s going to bother you, I suggest you bail out here.

Franken’s new book, “Al Franken: Giant of the Senate,” is a good read. I went to cover an event at the U of M the other night, at which he spoke about the book and, to my secret shame, I hadn’t read the book yet. His talk was fine, both funny and substantive, which is also true of the book (which I have now read). Because of my job description, I got to go with a small group afterward to a back room for what is called a “press availability,” where a newsmaker makes himself available to journalists. I didn’t have any big agenda and wasn’t sure yet whether I would write about the event.

I covered Franken, a lot, in 2008, during his campaign and the endless recount that ultimately led to him serving in the Senate. I haven’t had much contact with him in recent years and, to tell you the truth, I had no idea whether he would recognize me or remember my name.

A big greeting, and a question

When he saw me in the little back room, Franken not only gave me a big greeting (which, OK, made me feel nice) and horrified me by asking whether what he said about me in the book was accurate and OK with me. Well, I had no idea I was mentioned in the book, mostly, my bad, because I hadn’t read it, but tried to somehow get through that moment without admitting as much. I’m sure you’ve been there, or somewhere in the vicinity.

It didn’t really work because Franken kept talking about what sounded like a long passage that involved me. So, I finally confessed that I hadn’t read it and hadn’t acquired a copy of the book (which someone on his staff soon handed to me) and promised to let him know if the parts about me we accurate.

It turned out to be a whole chapter about an incident that I told friends about for years, until they all got sick of it. So I stopped. But now, I get to tell it to you, unless you have already read Chapter 10 of Franken’s book, titled “I Try to Litigate Comedy.”

As you probably know, before he ran for the Senate, Franken was famous as a writer and performer on “Saturday Night Live,” as host of a satirical liberal political radio show on the “Air America” network, and as the author of funny but serious and smart political books with titles like “Rush Limbaugh Is a Big Fat Idiot.”

Franken believed that the skills he had developed as a satirist – let’s start with the skill for recognizing and pointing out absurdity – were a valuable qualification for a Senate career. I understand that, and I mostly agree that there is something to that idea. But, of course, if you’ve been going for laughs, and have filled up books and articles and TV sketches with material that had to be funny and could oft-times be also raunchy, the raunchiness of it was going to be used against you when you ran for the Senate. 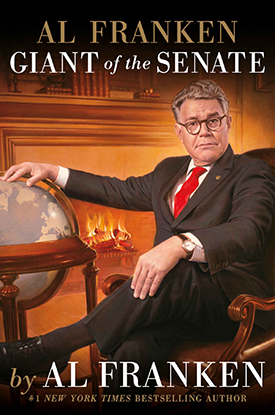 Franken’s campaign staff wanted everyone to stop paying attention to that stuff, while Franken thought smart journalists should be able to explain to Minnesotans that if you look past the blue language, there’s a smart guy there who can see through the absurdity of political B.S.

I was one of the reporters whom Republican operatives would contact when they found the raunchy stuff. And, following the tradecraft of journalism, I would contact Team Franken and ask them to comment on what Franken had said or written. Franken’s professional team wanted the whole pattern to stop, but they couldn’t make it stop. When I would call them for comment, they would try to persuade me not to write about things Franken said in his satirist days, especially the parts with sex and dirty words.

But that wasn’t my job. I don’t feel completely proud of this, but my job was to try to get Team Franken to respond to the stuff that the Team Coleman was circulating (and the same in reverse). Franken’s communication team, led by Jess McIntosh, could give me a “no comment” and hope this stuff went away (which it wouldn’t), but they had another problem — which was that Franken still thought he could explain it.

Cut off from campaign

This never happened to me in any other campaign I covered, but McIntosh decided to cut me off. This part isn’t in Franken’s version of the story, and I don’t know if he was aware of it, but McIntosh told me that the campaign would no longer respond to my questions nor give me access to Franken. Yikes.

I can sort of understand her thinking, but it was not a good idea. The other campaign was not going to stop giving me stuff and my employer wasn’t going to stop publishing about it, nor was anyone else. I remember wondering whether Franken, with whom I had had plenty of good interactions, was on board with the ban. Then I found out.

I went to cover an event featuring U.S. Rep Tim Walz as the speaker, and I saw Franken sitting in the audience, by himself. So I sat down next to him. He gave me a friendly greeting and asked how things were going. I asked if he was aware that he was banned from talking to me. He asked why. I explained and he immediately began to explain the importance of satire and the value to a senator of having the skills of recognizing absurdity and pushing back against it, skills that satirists develop.

I said that might be right, but there were people who just heard him saying and writing dirty words in public and they couldn’t get past it. He asked me for an example, and I brought up something he had written in his (very good, very smart, full of naughty words) book “Lies and the Lying Liars Who Tell Them: A Fair and Balanced Look at the Right.” In that book, he wrote he was going to title his next book “I Fucking Hate Those Right-Wing Motherfuckers.”

Al thought it was satire. I thought it was funny, but thought many people would consider it language unsuited to a senator, and, either way, it was part of his record and he would have to own it. And, by bringing it up to him, I was giving him a chance to comment.

The levels of satire

Here’s where maybe our recollections diverge a bit. The way Franken tells it, it’s as if I didn’t get that he had meant what he wrote as a joke. He wasn’t going to stop explaining it to me until I acknowledged that it was a joke. Of course, I didn’t think he was literally announcing the title of his next book, and I got that he was F-bombing in a way that would make people laugh, partly out of shock. I wasn’t sure it was quite dry or insightful enough to merit the term “satire.”

The way I tell the story (and I assume the senator disagrees) I questioned whether it qualified as “satire.” He said something like: “It’s satire that’s working on at least four levels.” I said something like “Really, I only get the one level, which is the shock value of the F-bomb.” I believe he started to enumerate the three or four levels (which, I confess, all sounded like the same one level to your humble and humor-impaired ink-stained wretch) when all of a sudden Jess McIntosh, who had banned me, showed up. Apparently, when she told Franken not to talk to me she thought it would be clear that that would include not arguing with me, in a fairly excited tone, in front of a gathering crowd. McIntosh dragged the candidate off (and I have a hunch that he believes that if he had just had another minute he would’ve broken through to me about the three or four satire levels).

The whole thing strikes me as a bit funnier than the Franken joke (correction, the Franken “satire”) that set it off. I eventually got unbanned (or at least I think I did), and Franken ended up winning the closest Senate election in Minnesota history.

He titled the chapter (it’s Chapter 10) “I Attempt to Litigate Comedy,” by which I gather he means he tried to argue me into seeing something as funnier than I saw it on my own. As quoted in the chapter, the moral of the story, as relayed by McIntosh, is never argue with a reporter. Me, I don’t mind arguing or being argued with.

Franken, at some point, forced himself to stop being funny, at least in public, or at least toned down the humor. His new book is much funnier than I have seen him allow himself to be since, well, maybe since that day when he tried to explain the levels of satire.

Before I read the book, I assumed he had figured how to be funny and still play it safe. But the book doesn’t play it all that safe. I asked him about it in the “press availability” last week. Had he figured out how to take the edge off the humor just enough to be senatorial? He didn’t agree. He said it was mostly that, after that first campaign and the role his comedy career had played in it, he felt he needed to assure Minnesotans that he was serious enough to be up to the job they had elected him to do.

Franken and me: Litigating comedy