Regular readers of this space have ascertained that your humble and obedient ink-stained wretch is at the less-enthralled end of the spectrum regarding the U.S. system of politics and government.

In its time and place, it was an important breakthrough in the development of democratic forms of government, but its performance over recent decades and the comparison to things that work better in other systems leave your wretch viewing the constitutional plan, as evolved, as more and more sub-optimal and yet, so rigid and difficult to reform.

It’s possible to overstate how big a deal it is, but modern technology has made it easier and more reliable to gerrymander districts for the partisan advantage of those who draw the lines. And a looming Supreme Court case will soon make it a front-burner issue.

In 2016, Republican candidates for all 435 seats in the U.S. House received 49.1 percent of all votes nationwide, compared to 48.0 for Democrats. Other parties or independent candidates received the remaining 2.9 percent.

If the House seats were divided precisely according to the breakdown of the major-party vote, the current House would be composed of 220 Republicans to 215 Democrats. That would be a margin so small that the relative moderates in both party caucuses would certainly hold tremendous leverage and the likelihood of bipartisan compromise would probably increase.

Instead (assuming, as seems likely, that the one current vacancy, in Utah, is filled by a Republican in the special election scheduled for November), Republicans control the House by 241-194.

To illustrate the difference between a House with a 47-member advantage versus a five-member advantage, consider: 20 of the most moderate Republican members of the House, many of them representing districts that Hillary Clinton carried last year, voted against the so-called American Health Care Act, a bill that the Congressional Budget Office projected would increase the uninsured population by 23 million.

In a House of 241-194, the bill passed anyway (although, as you know, it has made no further progress toward becoming law). In a House with a five-member advantage for Republicans, those 20 moderates would have sunk the bill or it would have had to be adjusted to reflect their objections. Perhaps it would have created the possibility, which I discussed Monday, of a bipartisan centrist plan for adjusting the Affordable Care Act, rather than destroying it.

Of course, as you also know, the Trump-Ryan American Health Care Act has made no further progress. And the Senate version of the bill is now on life support. But this is about the power of the gerrymander.

In the interest of keeping it honest, the difference between the current partisan makeup of the U.S. House and one that more accurately reflects the overall partisan preferences of the country is not all about gerrymandering. Several factors — other than the precise lines of congressional districts, which are engineered to help whichever party has power over drawing them — help explain why one party or the other might end up with more or fewer seats.

Both parties adept at it

But just as clearly, gerrymandering is a powerful tool for creating a U.S. House that does not accurately reflect the views of the electorate. Recent analytical and computerized tools have made it more powerful. Both parties (but perhaps the Republicans have been the recent champions at these skills and tactics) have become more adept at drawing lines to maximize their yield of U.S. House seats when they have the power to control the map-drawing exercise. We all know this. And it goes back to the Republic’s earliest days. In fact the term “gerrymander” derives from the name Elbridge Gerry and the shape of a salamander.

Gerry was a Massachusetts politician of the founding era. He attended the Constitutional Convention of 1787 (although in the end he refused to sign the proposed Constitution and campaigned against its ratification). He eventually served as governor of Massachusetts and as vice president under James Madison. During his governor days, Gerry helped create, for partisan gain, a Massachusetts House district map so tortured that one of the districts resembled a salamander. Get it? Gerry-salamander. The world “gerrymander” was born. 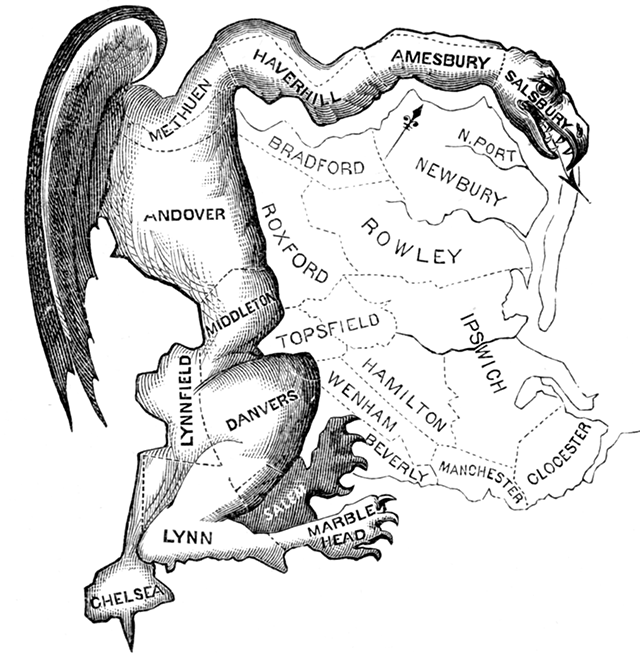 Boston Centinel/Elkanah Tisdale
Printed in March 1812, this political cartoon was drawn in reaction to the newly drawn state senate election district of South Essex created by the Massachusetts legislature to favor the Democratic-Republican Party candidates of Gov. Elbridge Gerry over the Federalists.

And the gerrymandering of congressional district maps has been treated as an ugly but legal practice ever since. With one fairly recent exception: The Supreme Court made clear over recent years that a clear use of race in drawing districts was unconstitutional. Most recently, the court ruled 5-3 in May against the 2011 redistricting map of North Carolina. The court found that the Republican-controlled Legislature drew a map that packed most of the black residents into two strangely shaped districts so as to maximize Republican control of most of the other districts. The court decided that using race this way was unconstitutional.

But it has never ruled that using less racialized map-drawing tricks to advantage the party in control of the maps was unconstitutional. And a case testing that rule (racial considerations no, partisan considerations yes) is scheduled for the upcoming term.

It happens to come from our neighboring state of Wisconsin, and it isn’t about the congressional map, but the map of legislative districts. The plaintiffs argue that the Republican legislative majority that drew the 2011 Wisconsin map of legislative districts used their map-drawing power to advantage their own party in a way that violates the Equal Protection Clause of the 14th Amendment and the First Amendment’s guarantee of freedom of association. The court has never taken a redistricting challenge on those bases before.

The case is titled Gill V. Whitford. Keep your eye on it if you find this interesting. Oral arguments are expected later this year. Based on previous cases, Justice Anthony Kennedy (big surprise) is expected to be the key swing vote.

But in closing, just to loop back to where I started, other younger democracies, with the opportunity of learning from our example, have come up with a lot of ways to elect a national legislature without relying so heavily on district maps drawn by potentially biased partisans. Some of those ways are summarized at the bottom of this Washington Post “Monkey Cage blog” piece, which also sets up the Gill case at the top.

The Post piece mentions several different methods but first one is the most obvious. To quote the Monkey bloggers, who are political scientists:

In most other long-term democracies, a politically neutral body draws the new district maps — perhaps a quasi-judicial body or nonpartisan administrative board or commission. The redistricting bodies of some countries, such as New Zealand, include representatives of the major parties.

But the more common pattern is to explicitly exclude anyone with partisan connections, as is true in Canada and India. In Britain, the ‘redistribution of parliamentary constituencies’ is carried out by a nonpartisan Boundary Commission. Parties can object to the commission’s redistricting recommendations, but it’s purely a consultation; their overall influence is limited. In some long-term democracies, such as Britain, legislatures must approve the new electoral maps that have been drawn by independent bodies, but this is typically a formality.