Before Donald Trump, every president had experience in the high levels of government. Specifically. Every pre-Trump president had held one or more of the following jobs: vice president, member of Congress, member of the Cabinet, governor of a state, or general of the U.S. Army. Most presidents had prior experience in more than one of those jobs.

The Constitution, of course, imposes no requirement other than that a president be at least 35 years old and native-born American.

It wasn’t a law; it wasn’t a rule. But, for all of U.S. history before 2016, over 57 quadrennial elections, it was in some vague, collective sense deemed necessary for a president to have some prior experience in the governing game. It was what we call a “norm.”

Norms can be powerful, but they are not enforceable. No one could have taken Donald Trump to court to get him thrown off the ballot on the grounds that he lacked the proper prepresidential job experience.

It turns out he’s really bad at the job (according to me), but I do not claim that’s fundamentally because he never served in the Senate or the Cabinet. He brings a staggering list of deficiencies to the job that are rooted deep in his character, much more than in his résumé. But once a norm is violated, it tends to be exposed as “just a norm” and then to lose its power.

Which brings us to the current Oprah Winfrey moment.

I’m certainly not predicting that Oprah will become president, or run, or be the next Democratic nominee. She claims to have no such plan, although some close to her say it’s a definite possibility that she is considering. I would suggest anything other than a total Shermanesque statement be viewed with skepticism. But I would also recommend waiting and seeing. I am cursed by an inability to know the future, but I am blessed with an awareness of my curse.

Still, over the last two days, the idea of Oprah as a possible presidential contender has become a thinkable thought.

And one reason (there are probably 20 reasons) it has become thinkable is that the old norm of what kind of career experience makes someone thinkable as a presidential candidate have been shattered by the results the last election.

Oprah is probably very smart, nice, generous. She is very rich (and, unlike the current incumbent, she wasn’t born that way, which should help as a political matter). 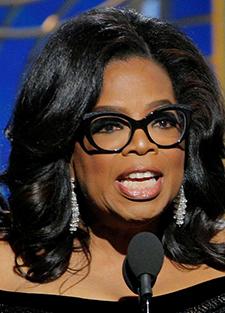 Now, the fact that Oprah is good on TV is a huge plus. For those young enough not to remember this, before the 1960 Kennedy-Nixon debates, no one understood how much the ability to look good and come across well on the tube mattered. Now it may matter more than anything in the electability portion of the program.

And it’s not just important to look good and sound good on TV, but to come across as likable. “Likable” may have replaced “qualified” as the single most important attribute. I was not a regular viewer of Oprah’s TV show, but I gather that coming across as likable was a very big part of it. I say this without evidence but with little fear of contradiction: If Hillary Clinton had the knack of TV likability, and that other omnipotent quality – relatability — she would be president right now.