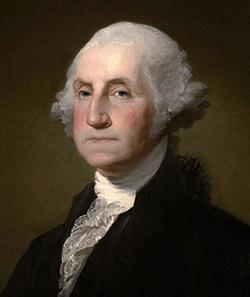 Times change, to state the obvious. I previously noted that before the 20th century there had never been a Senate committee hearing at all on a Supreme Court nomination, and the first time a nominee actually showed up for one was 1939. But I just stumbled on a Washington Post “Retropolis” piece from earlier this month that recapped the process for the very first spate of such nominations, when George Washington was president, and neither tweets, TV, telephones nor telegraphy had been invented. The highlights include:

Washington nominated the first six Supreme Court justices on Sept. 24, 1789, moments after Congress passed the Judiciary Act of 1789. Though the Supreme Court was described in Article III of the brand-new Constitution, the act was needed to establish the details, such as how many justices there would be (six at the time). It also established the rest of the federal court system and the position of attorney general.

Within two days, all of the nominees — John Blair Jr. of Virginia, William Cushing of Massachusetts, Robert Harrison of Maryland, John Jay of New York, John Rutledge of South Carolina and James Wilson of Pennsylvania — were confirmed by voice vote in the Senate. It happened so fast, it’s likely some didn’t even know they were nominated. After all, back then, news traveled at the speed of a horse.

Which turned out to be a problem. Harrison, who had served side by side with Washington during the Revolutionary War, wrote the president to decline the job. “I must hazard, in an eminent degree, the loss of my health,” he wrote. He was too sick to make the trip to the temporary capital in New York City, he said.

Washington and another friend, Alexander Hamilton, wrote Harrison back, begging him to reconsider. Months later, Harrison attempted to make the journey, but turned back before he made it out of Maryland. He again declined the position, and died a few months later.

Have a great weekend.

Stuff was a lot harder for George Washington