Opinion
Eric Black Ink
Sept. 25, 2019
Mass killings, in the United States and elsewhere, often appear and are sometimes treated as the actions of a deranged lone gunman, and to some extent they are intended to appear as just that. But that is often not what they are, University of Chicago historian Kathleen Belew told the Westminster Town Hall Forum Tuesday.

Her talk, titled “The White Power Movement and Its War Against the State,” said that movement is designed to look leaderless and random, and to function that way, but is nonetheless organized around specific goals.

Belew has studied the movement for years. She is a cautious scholar, and was reluctant during the Q and A to make a connection to racist elements of the Trump coalition or the president himself, although she certainly didn’t dismiss or rebut such thoughts.

But her main point was that many actions that look random and unconnected are part of a white supremacist movement that is “organized to overthrow the U.S. government” and replace with a regime dedicated to white power.

That project was proposed in what Belew called a “declaration of war” on America, published in 1983 by a former Klansman turned revolutionary named Louis Beam, which laid out the strategy and called for Vietnam vets, whom Beam argued had been betrayed by the government, to bring the war home.

The movement is organized around the principle of “leaderless resistance,” so it has no central authority structure, Belew said. It is united by “white nationalism.” Its targets are blacks, Latinos and Jews. Its followers seek to create massive casualties, which are meant to inspire other mass killings, leading somehow to white supremacism. (Belew has written extensively about this as a historical matter but, in her Westminster talk, didn’t describe in any detail how these actions are supposed to lead to that result.) 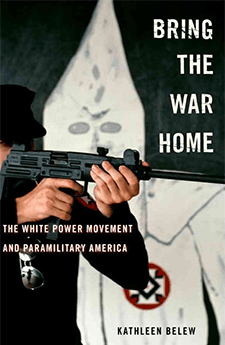 The theorists who promote this strategy specifically call for a “leaderless resistance,” encourage the formation of free-standing “cells,” but the movement appears to have no central organization, which Belew said is meant to foil government efforts to penetrate the movement and remain invisible, while creating a “fiction of lone-wolf actors.”

Her book on the subject is “Bring the War Home: The White Power Movement and Paramilitary America.” The greatest victory in this “war” was the 1995 bombing of the Murrah Federal Building in Oklahoma City by Timothy McVeigh, which, Belew said was the “biggest deliberate mass killing” on U.S. soil between the Japanese attack on Pearl Harbor in 1941 and the 2001 Al-Qaida attack on the World Trade Center. Unlike the other two, McVeigh was inspired by the call for a leaderless revolution.

Belew estimated that this ongoing movement has about 20,000 hard-core activists, but that about 150,000 to 175,000 support the movement financially and about 450,000 Americans read the literature put out by the movement and/or have been inspired by the 1978 novel “The Turner Diaries,” which lays out the path to an all-white future for America. Most who read this stuff are not active, but at least are drawn to some of the ideas behind the movement, she said.

During the question period, Belew was asked if the movement she’s describing has followers everywhere, including Minnesota. She said yes, and its followership cuts across social and economic classes.

By the way: MinnPost is among the sponsors of the Westminster lecture and discussion series.