Donald Trump has fundamentally repositioned the United States on a number of principles that have been fundamentals of U.S. policies, ranging from the importance of the spread of democracy and freedom in the world to the structure and priority of U.S. key U.S. alliances like NATO, to even the idea of principles themselves, or at least whether any of them are worth preserving if they conflict with short-term Trumpian goals, a former high-ranking State Department official and former top editor of Time magazine told me in an interview yesterday.

Richard (Rick) Stengel, former Under-Secretary of State for Public Diplomacy and Public Affairs from 2014 to 2016, was in Minneapolis to give talks about his latest book, “Information Wars: How We Lost the Global Battle Against Disinformation and What We Can Do About It,” just published last month, and gave a talk last night at the Minneapolis Central Library downtown.

In an interview before his public presentation, he was blunt and very critical. For example, he said:

I asked him for examples. He went straight to the new normal, which is also the heart of the impeachment matter. He said:

”One of the things that’s kind of soul-destroying about [Trump’s] call with [Ukraine’s President Volodymyr] Zelenskiy, is that once upon a time we were asking Ukraine to do more about corruption, be more democratic, to lean west rather than toward Russia. But he wasn’t asking for any of those things. That phone call itself showed the president of the United States being completely transactional.”

Stengel referred to the call, in which Trump was asking for a favor that would help him politically in exchange for the release of military aid that Ukraine needed desperately to defend itself from Russia.

“Look, it wasn’t like we were always angelic” or didn’t understand that not all politics is about doing the right thing for the right reason. But Stengel recalled an African diplomat saying to him: “You come and talk to me about transparency and human rights. The Chinese come and build me a highway.” But, Stengel said, “Our foreign policy has never been transactional in that way, the way that the Trump administration seems to be about.” 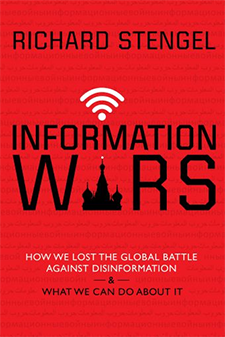 For example, he said, it was a fundamental principle within the NATO alliance that if any NATO member is attacked, all members do everything to defend it. This is made clear in Article 5 of the alliance. But the power of that guarantee is so respected that, in the decades-long history of the alliance, with one exception, no NATO country has been attacked, because any attacker understands that they will face the unified might of all members.

The one exception was after the 9/11 attacks on the United States. And, he said, “We received all requested help from all NATO countries.”

That’s why Stengel called it “mindboggling” to have a president, like Trump, who not only criticizes other NATO partners but talks about the NATO alliance as useless and/or defunct.

Trump has disparaged several NATO members, which undermines the cohesion and power of NATO, and invites potential adversaries to wonder whether the guarantee that an attack on any member will be treated as an attack against all members, as they have previously believed.

Ukraine is not a NATO member, although there has been talk of adding it to the list. The small Baltic Republics of Estonia, Latvia and Lithuania — like Ukraine, former Soviet Republics — were added as NATO members, and Russia hasn’t dared invade them, although Russian propaganda sometimes suggests that the West would not defend them if Russia attacked. There has been talk of adding Ukraine to the alliance, which would surely be a warning to Russia.

For decades, the number of democracies in the world has grown, and the United States has encouraged that growth. But, Stengel said, Trump has “accelerated this idea that the United States is no longer in the democracy-promotion business. It is in the business of ‘America First.’” Stengel called that a “false choice,” adding:

“Whatever Trump means by ‘America First,’ I would argue that promoting democracy, the rule of law, modernism and a globalized world is in the interest of the United States. We benefit from free trade, the universal rule of law, from countries [democratically] choosing their leaders. … Among the reasons that the U.S. economy remains buoyant is that we benefit from the multilateral world that we helped create” in which the number of democracies has grown fairly steadily for decades, and, as the leader the world’s democracies, the spread of democracy adds to what is called the “soft power” of the United States.

Russian President Vladimir Putin, who believes the growth of democracy is bad for him, has “started a rear-guard action to combat that trend,” Stengel said, which isn’t that surprising. But it is very surprising that “we now have a president of the United States who seems to think that democracy isn’t necessarily the best system.

“Finding common cause with Mohammed bin Salman in Saudi Arabia even after the assassination of [Washington Post journalist] Jamal Khashoggi is clearly not democracy promotion. Siding with [Turkish President Recep Tayyip] Erdogan’s designs in that part of Syria [until recently controlled by Kurds who were working with the United States] is not either. …

“Certainly appearances suggest that there’s some affinity and connection there,” Stengel added. “I have a chapter in my book about times that candidate Donald Trump seemed to eerily mirror what Putin and other [undemocratic figures] were saying. …”

We ended our discussion on the subject of past and possible future interference by Russia in U.S. elections. Said Stengel:

“My book is partially about how Russia interfered in our last election, an act of cyber warfare. I tell people: Don’t call it ‘meddling.’ That sounds too minor. Call it ‘a hostile attack.’ Any other administration would have spent billions of dollars to prepare itself, to fortify itself to prevent the in-flow of disinformation, to prevent acts of cyber warfare against our election infrastructure. Again, part of the evidence of this administration’s attitude about our democracy is that it has ignored it all, particularly what Russia is doing in terms of disinformation in preparation for 2020. That’s also a terrible mistake and could be tragic for the country. The first priority of any president is to defend the United States from foreign attack. Donald Trump seems to have abdicated that most basic responsibility of his office.”