Is the Republican Party destroying itself?

That’s not just a question. It’s also the title of book, published earlier this year by the always insightful Thomas E. Patterson of Harvard’s Kennedy School, where he holds an endowed chair in government studies.

“Is the Republican Party Destroying Itself?” is not a book about President Donald Trump, although Trump figures prominently. It is a short, very readable look-back at how the GOP dug a hole so deep that it is on a path to minority party status for “a generation of more,” Patterson argues.

I’m not smart enough to see a generation ahead. And Patterson doesn’t really claim to either (note that the title ends with a question mark). But he makes a powerful case, based on the GOP’s recent success of digging itself into five holes (Patterson calls them five “traps”) of its own making. Here are the five, which Patterson says “vary in lethality but, together, they could cripple the party for a generation or more.”

One trap is its steady movement to the right, which has distanced the party from the moderate voters who hold the balance of power in a two-party system.

A second trap is demographic change. Younger adults and minorities vote heavily Democratic, and their numbers increase with each passing election. The older white voters that are the GOP’s base of support are shrinking in number. Within two decades, based on demographic change alone, the GOP faces the prospect of being a second-rate party.

Right-wing media are the Republicans’ third trap. A powerful force within the party, they have tied the GOP to policy positions and versions of reality that are blunting its ability to govern and impeding its efforts to attract new sources of support.

A fourth trap is the large tax cuts that the GOP has three times handed to the wealthy. The rich have reaped a windfall but at a high cost to the GOP. It has soiled its image as a party of the middle class and created a split between the working class and marketplace voters. And that has created a split between its working-class supporters and marketplace conservatives.

The fifth trap is the GOP’s disregard for democratic norms and institutions, including its effort through voter ID laws to suppress the vote of minorities and lower-income Americans. In the process it has made lasting enemies and created instruments of power that can be used against it.

Trump and Trumpism represent the high point of these trends, but Patterson traces them back over several recent election cycles, writing:

Each of these traps has deepened under Donald Trump. The GOP needs to restore its conservative heritage if it is to remain a competitive party. Our democracy requires a healthy and competitive two-party system and would not benefit from a greatly diminished Republican Party, nor can it flourish from the reactionary course that the GOP is on.

Current polls suggest that Trump is likely to lose in 2020, but if he does win he will almost certainly do it without winning the most popular votes nationally. How long do Republicans think they can keep that up?

The paragraph above comes more from me than from Patterson. But his book’s title, “Is the Republican Party Destroying Itself?” suggests a similar question. A lot of his argument is bluntly demographic. Blacks, Hispanics, gays, feminists and people with college degrees are all growing as a percentage of the electorate and are all groups that break heavily for Democrats.

Patterson has a graphic of the Asian-American vote in presidential elections since 1992. In 1992, Asian-Americans broke 65-35 for Republican nominee George H.W. Bush, over Democrat Bill Clinton. The line crossed to slightly pro-Democratic in 1996, then more so in 2000 (57-43 percent). Then it kept going in the same direction. In 2016, it was 71-29 for Hillary Clinton over Donald Trump. Yup. 71-29. And, of course, the size of the Asian-American vote continues to grow, as do the other non-white groups that are part of the analysis. 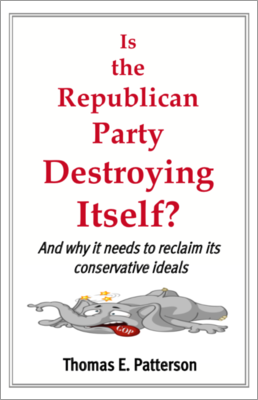 In another graphic (that really lines up with Patterson’s title), Patterson breaks voters down by ethnicity, religion and education level, and projects the changes in the size of those groups over the next four presidential election cycles.

If members of those groups continue to divide their two-party vote by the same margin as they did in 2016, when Hillary Clinton beat Trump by two percentage points, the Democratic nominee will beat the Republican nominee in 2020 by four, in 2024 by six, in 2028 by eight, and in 2032 by 10 points, based entirely on the fact that the groups (by race, ethnicity, by education level, etc.) that favor Republicans in the electorate will shrink relative to growing categories of voters who tend to favor Democrats. Trump has made no serious effort to broaden his appeal for 2020. Will that change, or “Is the Republican Party destroying itself?”

Democrats also advocate policies that are closer to the policy preferences of independent voters than Republican policies are. Republicans rely heavily on Evangelicals and other deeply religious Christians, but secular voters and non-Christians are faster-growing blocs.

There also used to be more moderate Republicans, among voters and candidates. But since Ronald Reagan, the party has been a fairly unabashed party of the right. Patterson includes a graphic showing the “distance,” based on polls, between Republicans, Democrats and independents on various issues. On every one, by his calculation, the positions of the average Democrat were closer to those of the moderates than the average Republican is.

Will the Republican Party read Patterson’s book, believe it, learn from it, adjust to the many obvious ways it needs to change to remain competitive in the coming America? We’ll see. But not as long as it remains the party of Trumpism.

Harvard scholar explores the question: Is the Republican Party destroying itself?