Opinion
Eric Black Ink
Aug. 10, 2020
Paul Begala is out with a new book, titled “You’re Fired” and subtitled “The Perfect Guide to Beating Donald Trump.” He’s out promoting it and, although I haven’t had a chance to acquire it yet, I’ve just listened to him on two excellent podcasts, one hosted by David Plouffe and the other by Al Franken. I recommend you listen to one, but not both (because there’s a lot of overlap, naturally).

If you recall Begala, it’s probably because he and the more colorful ragin’ Cajun James Carville were key members of the political team that helped Bill Clinton win the presidency. (Begala also worked in the Clinton White House, advised Hillary Clinton in 2008, but after she dropped out supported Barack Obama.) 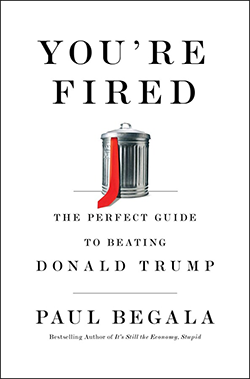 Down to earth and very likable (at least in these interviews), Begala is full of common-sense insights into the state of our imperiled democracy and somewhat reassuring about the chances of ending the Trump presidency. To me, it’s fairly obvious that the country is ready to fire Donald Trump (whom the majority of voters never voted to hire). Trump seems to understand this as well, and is, astonishingly, publicly ruminating about various ways to lie, cheat and steal his way to a second term. (My advice to him would be to stop talking about it so openly.)

I plan to read the book. But if, like me, you want to hear the Begala interviews first:

Here’s a link to his interview with Plouffe.

Here’s the interview with Franken.

Much as I always like the Franken podcast, if you only have time for one, the advantage of Plouffe is that he and Begala are both campaign professionals. (Plouffe, if you can’t place the name, was Barack Obama’s campaign manager in 2008.)

If you take that suggestion, you can make it up to Franken by listening to his previous show, an interview with recent presidential candidate Andrew Yang, who is at least as down-to-earth and adorable as he always seemed (at least to me) during his run for the Democratic presidential nomination. The Franken-Yang conversation is here.