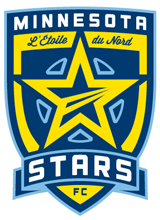 Now the league starts a second chapter with an eight-team league and is providing top quality american soccer to communities across the U.S., Canada and Puerto Rico.

The NASL brought the Kicks to Minnesota and professional soccer has been a part of the sports landscape in the land of 10,000 lakes ever since. After a great run with outdoors, soccer went indoors with the Minnesota Strikers. The Minnesota Thunder followed in 1994 and had a great run of success that included sending several players on to the U.S. National Team and other professional teams. After the collapse of the Thunder in 2009, the Stars began play in 2010 as the NSC Minnesota Stars, a team owned and operated by the National Sports Center in Blaine. In 2011, the team changed hands, becoming a league-owned franchise, winning the 2011 NASL crown in the first season of the re-launched league. On January 9, 2012, the NSC Minnesota Stars unveiled a new crest and announced a change in name, as the team became known as Minnesota Stars FC.

The history of Professional Minnesota Soccer can be found in detail at MNThunder.com.

Check out the Minnesota Stars calendar for the next home game.