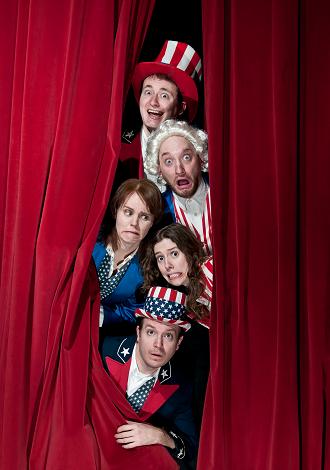 Receiving rave reviews during its initial run, Theatre Pro Rata’s production of 44 Plays for 44 Presidents returns for a special Election Night encore performance! A chronological, biographical survey of each of the 44 men who have held one of the most revered and regrettable positions of power on earth. Their miracles and misfires are celebrated by a fistful of actors while moving through comedic and tragic moments, revelations, reconstructions, and mini-musicals.

Where has the presidency gone since its fall from paradise? Where will it continue on to? And how much responsibility do we-the people-hold? Originally created by the Neo-Futurists in Chicago, 44 Plays for 44 Presidents is a love song to every Mad Tom, Tricky Dick, and William Henry Harri-who.

This performance is part of the nationwide Plays for Presidents Festival. 43 other companies will be performing 44 Plays at the same time, breaking the all-time record for most simultaneous productions of a play!

General admission tickets are on a sliding scale from $14 to $41 at the door.

For more information or to purchase tickets in advance, please visit our website, http://www.theatreprorata.org.

For reservations or other questions, please call (612) 234-7135 or email info@theatreprorata.org.