More than 700 MinnPost supporters gathered on April 26 to schmooze, laugh and raise money to support high-quality journalism in Minnesota.

Whether or not you came to the event, please donate now to help MinnPost reporters keep a watchful eye on public figures, institutions and businesses.

All Watchdog Challenge donations made by May 15 will be matched by a member of the MinnPost Board who wishes to remain anonymous.

We Got You, Sid

Don’t Cry for Me, Minnesota

I Was The News

You are invited to an evening of frolic, fundraising & mischief
as MinnPost.com presents

Online ticket sales officially closed! Walk-ins at $100 or $150 only (balcony seats) available at the door. 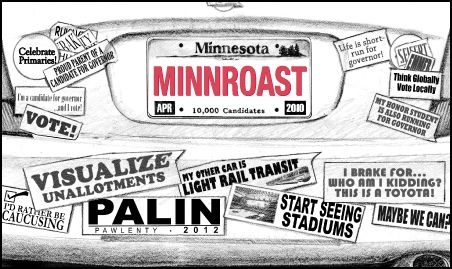 Monday, April 26 ● Show at Pantages Theatre
Reception next door at Seven: The Steakhouse
Both at 7th & Hennepin in downtown Minneapolis

7:15-8:15 MinnRoast 2010
3rd annual Gridiron-style show poking fun
at the media and the people we cover
plus raffle drawing — all at Pantages

Check out this year’s raffle prize! 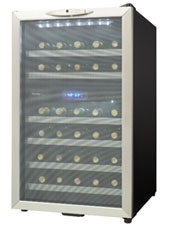 This Danby Designer free-standing wine cooler — generously donated to MinnRoast by Warners’ Stellian Appliance — stores up to 38 bottles of wine in two separately regulated temperature zones. Inside the cooler, the lucky raffle winner will find a gourmet selection of mellow reds and crisp whites — more than a dozen bottles of fine wine donated by MinnRoast Event Committee members and friends of MinnPost. Plus an assortment of other wines recommended for everyday enjoyment. Total value: $1,200.

Raffle tickets are $10 each, three for $25, and can be purchased with cash, check or debit card only. To buy raffle tickets before the event, contact vkujawa@minnpost.com.

A look back at history

MinnRoast 2009
More than 600 news junkies and newsmakers showed up at the Hilton Minneapolis on Wednesday, April 29, 2009 to eat, drink and make merry…and make money to keep serious journalism alive in Minnesota. The reception was so jammed you could hardly get to the silent auction. The Village People did their hilarious thing again, and helped us raise more than $75,000. Check out the video highlights and photos below.

MinnRoast 2008
On April 1, 2008, less than five months after we launched, MinnPost hosted and roasted a crowd of more than 425 at the Graves 601 Hotel. Highlights included MinnPost staff and contributors mimicking the ’70s band the Village People as they poked fun at Bill Kling and Minnesota Public Radio, and St. Paul mayor Chris Coleman announcing his break-up with the city of Minneapolis. MinnRoast 2008 raised more than $50,000 — but it’s a good thing we kept our day jobs. Check out these video clips from 2008.

Sponsor MinnRoast 2010 — at the level of your choice!

Sponsorships are tax-deductible, except for the value of tickets received ($40 per event ticket plus $10 per drink ticket), and can be paid for by check or credit card. Contact Laurie Kramer at lkramer@minnpost.com or 612-455-6950 for more information.