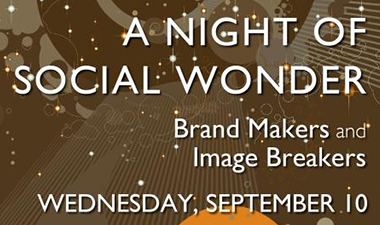 We live in a constant deluge of images and messages- corporate, personal, and that expanding base of everything in-between.  Thanks to the ease and availability of social media and technology, we have the expanded power to curate how we look, what we say and what image we choose to present ourselves with – all with a strategy in mind. But before the selfie and the glamour shot, Sweden’s most influential and innovative playwright, August Strindberg (1849 – 1912) was a forerunner in producing a product based on brand and image.   ASI’s current exhibit, The Image of Strindberg (June 14 – October 26, 2014) explores this idea in depth.

At A Night of Social Wonder on September 10, we’ll look to today’s brand makers and image breakers who are mixing it up, both locally here at home and in Scandinavia.  What brands do we carry, both as individuals, business and organizations, and why?  What’s working, what’s not?  What’s myth, what’s reality?

Moderated by 89.3 The Current’s Mark Wheat, each panelist gets nine minutes to share their insights and make their case. The audience is encouraged to ask questions, get engaged and share ideas.  ASI’s award-winning café, FIKA will be open before the program for dinner and a cash bar will be available.

NANCY LYONS (PRESIDENT AND CEO, CLOCKWORK MEDIA)
With the increasing speed and constant change of the digital landscape how do businesses adapt and evolve to keep up? Everything from commerce, and culture to people and behavior has shifted dramatically in just the last 15 years—all because of the influence of technology. We’ll discuss the challenges and opportunities of working in the innovation space and selling thinking and software that will never be ‘done’.

Nancy’s guided by a few simple, but telling, mottos: think strategically, act thoughtfully, and be a good human.  Inside and outside Clockwork, Nancy works at the intersection of technology, community, and people. A leader and technologist, she creates solutions that further community and business goals by meeting the needs of individuals. She’s guided by the philosophy that a human-centered approach to technology is the only way to get results that make a difference. Problem solving is about empowerment: motivated people create good products. Ultimately, Nancy supports clients and teams by fostering a collaborative, idea-driven culture that nurtures creativity and brainpower.

She speaks extensively about work culture, social media, technology, and leadership and has been locally and nationally recognized for her role as owner and CEO of Clockwork. She’s co-author of Interactive Project Management: Pixels, People, and Process (New Riders, 2012), serves as the Vice Chair on the National Board of Directors at The Family Equality Council, is on the Board of Trustees at Minnesota Public Radio, and is a Project Skyway Captain & mentor at Project Skyway.

DAMON RUNNELS (EXECUTIVE DIRECTOR, SOUTHERN THEATER)
What happens when your theater nearly collapses, both physically and financially, after more than a century of success and elegance? You restructure, rebuild and of course, rebrand. How is one of Minneapolis’ oldest theaters, that started as an offshoot of Stockholm’s vibrant Södra Teatern, revitalizing? Discover ARTshare, a new brand that combines artistic residencies, and revenue sharing with audience memberships.

Damon Runnals is the Executive Director of The Southern Theater, Producing Director of the nationally featured Swandive Theatre, a recreational gamer – video and table top – and golfer, and a new father. Damon is a graduate of Hartwick College in Oneonta NY. In 2003 he and his wife vacated New England and set up shop in Minneapolis.

KEVIN DILORENZO (PRESIDENT AND DIRECTOR OF CLIENT SERVICES AND BRAND STRATEGY, BARRIE D’ROZARIO DILORENZO)
What would you do with 500 hours of fully paid time off? Find out what employees at a Minneapolis ad agency did. Who would’ve guessed that a mandated sabbatical could have such a Return on Investment?

Kevin DiLorenzo is the president and director of client services and brand strategy at Barrie D’Rozario DiLorenzo (BD’D), an independent, full-service advertising and marketing agency that has been voted 4As “Best Small Agency in the U.S.” Kevin has guided brand and communications strategy for some of the world’s most recognized and respected brands. Prior to joining BD’D, Kevin was the president and CEO at Olson.

SARAH FOSSEN WEIMAR (PRESIDENT, AGENCY NORD)
Image breaking,  shattering a reputation, getting outside of the box—sometimes its intentional, other times it happens seemingly overnight – undoing years of hard work.   What happens when you need to break out of the box and shake up your organization’s image? How do you know your brand/rebrand is making the right impact with your target audience?

Sarah Fossen Weimar was Scandinavian cool before the Dayton boys decided to make bacon wrapped salmon lutefisk. If you need to find a solution for an impossible problem, Sarah will know a guy. If you need a creative idea, Sarah will toss you three by the time you reach for your pickled herring.  Prior to starting AGENCY NORD (formerly WMarketing), Sarah was Senior Director of Marketing and Special Projects at Capital City Partnership, Marketing Director for the City of St. Paul, and Marketing and Programming Director for Landmark Center, and the illustrious list continues.  Sarah draws inspiration from international best practices and believes that life is one big popularity contest. When her father told her she could never make a living talking on the phone and convincing people to go to parties, she spent the subsequent years proving him wrong.

Sarah is 100% Norwegian and speaks 5 languages poorly (but with gusto).

MARK WHEAT (MODERATOR)
Mark Wheat is heard weekdays 6-10 p.m. on Minnesota Public Radio’s 89.3 The Current and a DJ with the station since it launched in 2005. He tries to emulate his hero, the late, great BBC DJ John Peel, introducing new music to the audience by mixing it with songs they know and love.

Wheat was raised near Cambridge, England, permanently relocating to the United States in 1983. In 1991, he created “Local Sound Department” on KFAI, which was awarded “Best Local Radio Show” by the Minnesota Music Academy in 1996-1998. He spent 18 months at Zone 105, hosting an overnight shift, and “Across The Pond,” a weekly specialty show playing music from all over the world.

In 1998 he was hired as director of student programming at the University of Minnesota’s Radio K and created a weekly magazine show, “The Music Lovers Club.” He won the City Pages’ “Best AM Radio Personality” in 2004; and “Best FM Radio Personality” in 2009. Between 1999 and 2003, he was a resident DJ at First Avenue and The Lounge for which he was awarded the honor of “Best Club DJ” in 2000-2001 by the Minnesota Music Academy.

ABOUT ASI’s A NIGHT OF SOCIAL WONDER SERIES

In line with ASI’s mission of being a vibrant arts and cultural organization that acts as a gathering place for all people to share experiences around themes of culture, migration, the environment and the arts, with ties to Sweden, ASI’s public dialogue series A Night of Social Wonder gathers innovators, thinkers, leaders and practitioners from a cross section of sectors and disciplines to strike an open conversation around the relevant and timely themes explored in ASI’s major exhibitions. Panelists and the topics they present are curated to represent local, regional, national and international interests, all of course pulled together with the magic of moderator, Mark Wheat.