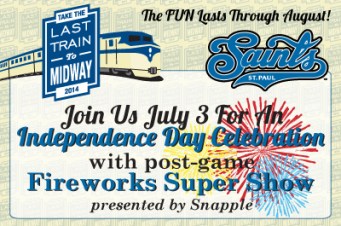 The St. Paul Saints were established as an independent, minor-league baseball team in 1993. The name pays homage to the former Chicago White Sox and Brooklyn/Los Angeles Dodgers affiliate that played from 1915-1960, primarily at Lexington Park. The newest iteration of the Saints calls Midway Stadium home and operates under the mantra “Fun is Good.”

The guide behind the team’s slogan is Mike Veeck. His irreverent view of marketing has helped create many notable promotions such as: Mime-o-vision; with mimes acting out close plays on the field, Randy Moss Hood Ornament Night; after the receiver was detained for bumping a traffic cop, the Re-Count Doll giveaway; noting the difficulty in deciding Minnesota’s 2008 U.S. Senate election between Al Franken and Norm Coleman, and many more. The team’s penchant for a good time extends to all breaks in the on-field action, with fun between-inning contests, massages in the stand from a nun, a hot tub a left-field, and live pigs delivering baseballs to the umpire.

The team has also been host to many successful players in its history. J.D. Drew, Kevin Millar, and Rey Ordonez are among those that count the Saints as their first professional team. Other notables include Darryl Strawberry, Jack Morris, Leon Durham, and Matt Nokes.

For more information, check out saintsbaseball.com.

Wild and outside with the St. Paul Saints