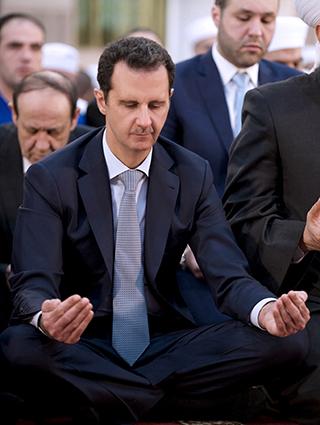 Did Syria’s president just draw the beleaguered tyrant’s equivalent of a get-out-of-jail-free card?

It might look that way. If you set aside for a moment the finger-pointing going on this week at the United Nations, you can just about glimpse the first steps of an approach that would allow Bashar Assad to stay in power, at least temporarily.

Things have gone badly for the Syrian leader this year. His war-weary forces have lost ground on a number of fronts — even if none of the militias arrayed against him seems capable of actually defeating him. Now, a sudden military buildup by his ally, Russia, including reports today of Russia’s first airstrikes, coincides with a renewed international focus on ending more than four years of civil war that has left at least 200,000 people dead and driven millions from their homes.

But lest he get too comfortable, Assad would do well to keep in mind this key point: Among the reasons he has survived this vicious civil war is a lack of determined action by major world powers. It’s far different — and perhaps even trickier — to hang on when the powerful really focus on you (even if one of them claims to be your friend).

You tend to end up with a price tag attached to you. And if haven’t already, you might want to think about where you could spend those long, quiet years of exile.

For the United States and its European allies, the pain of allowing the war to continue may be starting to exceed their reluctance to pursue the best of a lot of bad options.

Europe, already beset by economic problems, is awash with refugees, the largest number Syrians who are giving up hope of going home. The struggle to cope with the influx is laying bare divisions in the European Union at a time of increasing nationalism and anti-immigrant sentiment.

For its part, the Obama administration has been embarrassed by new revelations making clear what a shambles its policy is: U.S.-trained fighters handing their weapons to Islamic extremists; a lack of progress after more than a year in the bombing campaign against the Islamic State, and the inability to prevent thousands of foreign fighters from traveling to Syria to join the extremists.

So, in addition to the standard declarations this week that Assad must go, we’ve heard Western leaders indicate that he might not have to go immediately.

Even the president of neighboring Turkey, Recep Tayyip Erdogan, who has been among the most bitter critics of Assad (and whose country has taken in 2 million refugees) now says there might be a transitional role for Assad.

President Obama and other Western leaders certainly don’t agree with the Russian leader’s assertion in New York this week that Assad is far preferable to the Islamic State, and that the attempt to get rid of him only created room for the extremists to thrive.

Analysts have a lot of theories about what Putin’s up to. Among the most plausible are that he’s aiming to increase Russia’s influence in the Middle East, or open a new diplomatic front to distract from his meddle in Ukraine. He needs a reasonably friendly government in Syria; he doesn’t really need Assad.

And he has the power to tell Assad his time is up. It’s one thing when your enemies say it; quite another when the guy who supplies your guns says it.

You can see the appeal of a formula under which Assad remains during an international effort to cobble together a new government outside powers can live with, and that provides a Syrian face for an international campaign against the Islamic State.

This may go nowhere. A lot of Syrians and many governments in the Middle East would have big problems with it. Outside powers might not be able to come up with an agreement they can all tolerate. And it would create big, new problems down the road. But solving the immediate problem — and hoping for the best in the future — is often all diplomats can achieve.

Assad could bow out, saying he’s doing it for the good of the country (while spiriting out enough money to keep him comfortable in exile). Obama and his allies could declare they’ve achieved their goal of getting rid of him. Putin could secure his position in the Middle East, bask in his role as the indispensible statesman — and ask for something in return.

In fact, Putin’s ask is a key part of the puzzle. And while the U.S. would have to play a central role in any deal, it’s logical to think there would be real pressure on Europe.

European leaders need any ray of good news to give newly arriving Syrians (and many disgruntled Europeans) hope that the refugees will go home. At the same time, Europe is generally less wedded than the U.S. to the sanctions imposed on Russia for its actions in Ukraine.

It may still be premature, but if you’re a Western policy maker, you’d better be thinking about it. Is Syria a big enough problem that you’re willing to ease up on the Ukraine issue?

Is accepting Assad — for a time — the West’s way forward in Syria?