You were born in one of the mightiest powers the world has ever known. You’re deeply proud of your country’s strength, culture and unique geography. But it suffered through an economic cataclysm, which upended your life while allowing a small group of people to get unbelievably rich.

You – and your homeland – have been doing somewhat better in recent years. But you feel that the rest of the world doesn’t respect you anymore. So you want a leader who won’t be pushed around. You’re OK if many of his policies are not exactly democratic.

As strange as it seems, there are reasons during this most bizarre election season to compare the politics of the United States and Russia. The first two paragraphs of this piece could apply – at least in part – to many people in both countries.

But Russians, no less proud than Americans, have had it far worse since the collapse of the Soviet Union than Americans have had it since the Great Recession. America has durable institutions, even if they are under strain. Russians have gone through the breakup of their country, wars inside their borders and default.

Still, the hostility permeating the American campaign might help us understand Putin’s Russia. If there are common themes, and if millions of Americans are this angry, what should we expect from Russians? We know Putin remains highly popular. But why? It’s not only about the muscles.

The stories of people who live far from Moscow make it clear why Putin feels free to challenge the West on Crimea, on Ukraine, on Syria. And why he seems confidence Russians will put up with economic sanctions, rampant corruption, inequality and political repression.

You meet a magazine editor in her 30s who was educated in a Swiss finishing school, wears high-end European fashions, and yet “harbors a resentment, almost an outright hatred of the West.” And a steel mill employee, trained as an engineer, who accuses the West of interference in Russia but is more than willing to excuse Putin and his inner circle.

It’s hard to overstate how profoundly the collapse of the Soviet Union 25 years ago shocked the Russian psyche. Russians suddenly needed a new way to understand their place in the world. In addition to jobs and savings, they lost their identity. 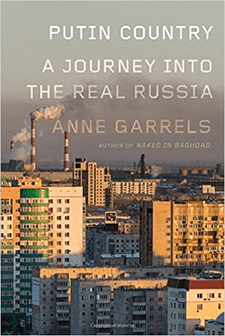 Doddering Boris Yeltsin was not the man to lead them through. In contrast, Putin projected strength and competence. But he also benefited from strong prices for Russia’s oil and gas. Enough income has trickled down to remake cities and create opportunities for a middle-class urban lifestyle. After what they’ve been through, few want to give that up. Even if oil prices slump, Russians still are much better off than they were.

While a lot of Americans are focused on what they’ve lost economically, plenty of Russians are well aware of what they’ve gained.

Then, there is the issue of pride. Here is a rule of thumb for the past 30 years: If Americans have a positive view of what a Kremlin leader was trying to accomplish, Russians probably despise him. That’s true of Mikhail Gorbachev. It’s true of Yeltsin, and his Western-backed economic reforms, which many regard as little more than a license to steal.

“After a honeymoon with the West, when many Russians fell in love with America, they felt all the bitterness and anger of a jilted lover when it didn’t work out as they had hoped,” Garrels writes.

Americans might fear that their country is in decline. But to Russians, it comes across as meddlesome, arrogant and duplicitous. After promising not to take advantage of Russia’s weakness, it expanded NATO to Russia’s borders, withdrew from a missile treaty, bombed Serbia and supported independence for Kosovo, supported revolutions in several former Soviet republics – including Ukraine. It invaded Iraq without U.N. approval and took military intervention in Libya beyond the scope of a U.N. mandate. Many believe the U.S. also is behind the anti-Putin movement in Russia, such as it is.

That’s a lot for a former superpower to swallow.

Putin’s Russia has plenty of problems. The brightest young people don’t see much of a future. Corruption is everywhere. Relations with minorities are fraught. Despite Putin’s efforts to rebuild Russia’s military, avoiding the draft is a national pastime. Looming is Putin’s failure to diversify the economy when oil prices were high.

Politics – wherever you go — is not always rational. It may be shortsighted, but Russians “are sick of the West’s beating up on them for their sins, especially now that they are more aware of Western sins.”

“In the absence of a national idea,” Garrels says, “Russians have fallen into blaming outsiders instead of dealing with the issues at hand.”