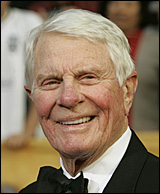 It’s not every day we must ask “But who will save us from an invasion of giant insects now?” But, then, up until this weekend, we had the Minneapolis-born Aurness Brothers. The older brother, James Aurness (who changed the spelling of his name to Arness when he moved to Hollywood) is still with us, having done service, valiantly battling giant ants in the 1954 film “Them!” Sunday, the younger Aurness brother, better known to the world as actor Peter Graves, died at age 83. Graves, of course, had saved the world from brobdingnagian grasshoppers in 1957’s “Beginning of the End.”

Graves was perhaps best-known to one generation for his role in “Mission: Impossible” and to the next generation for his predatory airline pilot in 1980’s “Airplane!” Obits of Graves can be found at the New York Times and from the Associated Press. Even now, we can hear a faint scuttling from below, as though ants and grasshoppers were scheming.

Graves wasn’t the only notable Minnesotan to pass away this weekend: Restaurateur LeeAnn Chin has died. Obits for her can be found at the Pioneer Press and Minnesota Public Radio; Tad Vezner of the PiPress also offers a fuller history of the founding of her popular restaurant chain; according to Vezner, Chin began cooking as a way of giving thanks to patrons of an earlier business of her, when she was a seamstress, handing out home-cooked food to patrons.

Let it be noted, however, that sometimes authenticity isn’t always desirable. For instance, we have a number of Irish pubs in the Twin Cities, but most don’t serve authentic Irish pub fare. You’re not able, for instance, to order KP Meanies, which is a pickled onion-flavored corn snack. Most don’t offer black pudding either, which is a sausage made from animal blood. To the best of our knowledge, nobody in town offers dulse, which is a red algae sometimes enjoyed as a snack food. Some foods just don’t make the jump to the United States, so, if you’re eating at, say, Kieran’s, you’re probably going to be having a whiskey tomato soup rather than crubeens, which are salted pig’s feet. We don’t mention Kieran’s just in passing, either. Vita.mn dedicated its cover to the pub (Downtown Journal also peeks in), which is in the process of moving to Block E, which will either be terrific for Block E or ruin Keirans. Perhaps both.

WCCO’s Jason DeRusha tackles a St. Pat’s Day question: Are the Irish really drunks? He gives the unhappy answer, which is yes, they are, with Irish drinking more beer per capita than Germans or English, which, as anybody who has ever seen patrons stagger out of a bar at closing in Berlin or London will tell you, is notable. But DeRusha also mentions how the popular depiction of Irish as drunks was less rooted in any actual drinking and more rooted in its usefulness in anti-Irish bigotry, something that was once so common that famous political cartoonist Thomas Nast was prone to sketching images of the Irish as loutish apes. We’ve come a long way, baby, now that everybody thinks he or she is Irish on St. Pat’s, and drinks accordingly. Which is terrific for America, but perhaps has ruined being Irish.

Case in point: According to Sheila Regan of the Daily Planet, leprechauns invaded area grocery stores this weekend to raise awareness of rainforest destruction. A noble goal, but a bit bewildering. There are no rainforests in Ireland.

Oh, that leads to a great transition: Speaking of being ruined, Denny Hecker had a seriously bad weekend. As the Pioneer Press’s John Welbes reports, despite filing for bankruptcy, Hecker will not be forgiven for his debts. You ever have one of those nights where you sit in front of a calculator, figuring out how much you owe and how long it will take to pay, and then you can’t sleep? Next time that happens, think of Hecker, who owes $767 million, and it is likely that “any income he generates in the future [will be] a target for creditors.”

Sometimes, it’s probably worth ignoring Michele Bachmann. For instance, we could discuss her anti-health care reform activism this weekend, but health care reform looks likely to pass using reconciliation, as they say, so what’s the point? (If you really must read more about this, the Minnesota Independent is a good starting place). However, she has a way of saying things that demand attention, if only for the sheer strangeness of it. At the rally, Bachmann declared Obama a “post-American president,” and just what does that mean?

Hart Van Denburg of City Pages tries to puzzle it out. As he figures it, she’s quoting Bush-era attack dog John Bolton. Interestingly, Bachmann’s primary complaint about the health care bill now seems to be that using reconciliation to pass it undermines the democratic process, mostly because it requires a smaller majority. It’s worth noting that when Bolton was nominated to the post of U.S. ambassador to the United Nations by President George W. Bush, Congressional Republicans used every trick they could think of to try and get his nomination passed over the objections of Democrats. So there’s a pot here somewhere, and a kettle, and accusations of being covered with soot.

In sports: The Strib’s Myron P. Medcalf sums up the year for the Gophers men’s basketball team, which, all told, wasn’t a bad one. He quotes player Lawrence Westbrook: “We achieved one of [our goals]. We missed on a few of them, but we achieved the final one of getting to the NCAA [tournament].”