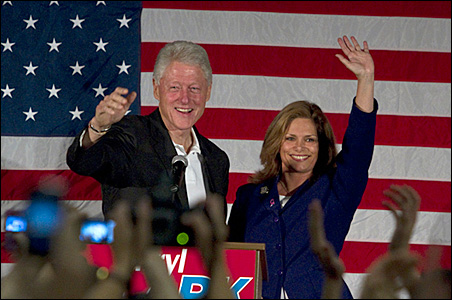 Let’s start with Obama. As you may have heard, the president of the United States of America came to Minneapolis Saturday to support DFL gubernatorial candidate Mark Dayton. As the Associated Press points out, he’d actually been on the road for four days, stumping for candidates; further, the AP notes, his message has fundamentally been the same on all stops: “Don’t give up.”

Obama explicitly addressed two things: Firstly, the typically feckless behavior of the American voter, who has a long history of voting for one party for president and then turning around two years later and giving up a lot of seats in Congress to the other party (“Defy the conventional wisdom,” Obama said), and the perceived “enthusiasm gap” of voters who were excited by Obama when he was elected, but are less so now. The AP quotes St. Paul Mayor Chris Coleman, who was in attendance: “They talk about an enthusiasm gap. Look at this room.” Indeed, there were a reported 7,000-plus people in the field house with the president, and another 4,000-plus watching from the Sports Pavilion across the streets. This reporter was there, and can confirm it was an enthusiastic crowd — as demonstrated by this photoset. But then, this reporter was also at the Mall of America a few weeks ago when a boy band he had never heard of was signing autographs, and there must have been 5,000 people there. Celebritydom has its allure and may not be a mark of voter enthusiasm.

But, then, events like this also have their benefits. Firstly, it garnered a lot of press for Dayton at a moment when he has a slight but hardly decisive lead over GOP candidate Tom Emmer (the latest poll has Dayton at 41 percent and Emmer at 34 percent). The location was well-chosen, targeting college-age voters who tend to be underrepresented on surveys and also might be the sort to just ignore state elections. It gave Dayton a change to ally himself with the president who, despite the enthusiasm gap, remains popular with liberals.

There are also benefits for the president. He’s been making a lot of appearances in the press lately, such as this extended interview he offered Rolling Stone magazine last month and this one in the New York Times. In the former, he offers up a list of his accomplishments; in the latter, Obama, and White House insiders, talk about the enthusiasm gap as being more of a communications gap — the White House spent so much time working on the politics, they claim, that they forgot to communicate what was going on the the American public and let others take control of the message. The interviews, and these public appearances, can easily be read as an effort to counter that. After all, when the president speaks, places republish the entire text of his comments, as did Minnesota Independent.

Outgoing Gov. Tim Pawlenty has stepped up his belated support for GOP candidate Tom Emmer, as reported by MPR’s Tom Scheck, saying that having Dayton as governor would jeopardize Pawlenty’s legacy. Whether or not that’s a disincentive to vote for Dayton, of course, depends on how you feel about Pawlenty’s legacy.

Obama wasn’t the only president in town this weekend. There was also William Jefferson Clinton, stumping on behalf of Tarryl Clark in her quest to unseat Michele Bachmann in the 6th. Eric Roper of the Star Tribune calls Clark’s expensive campaign an “uphill battle,” detailing the degree to which Bachmann is entrenched in one of Minnesota’s most gerrymandered districts. And Bachmann doesn’t just have a foothold in her district — As Annie Baxter of Minnesota Public Radio reminds us, she’s a star in the world of conservative politics.

But Bill Clinton, whatever you may think of him, is a powerful speaker and a magnetic personality, and he offered up what Hart Van Denberg of City Pages calls a “smackdown.” Clinton is subdued in the accompanying video, saying he could crack jokes about the Tea Party, but that it’s all background noise to the larger question of “where are we now, what are we going to do, who’s more likely to do it?” Clinton summarizes Bachmann’s approach as follows: “Michele Bachmann’s story goes something like this: ‘OK. We left you in a really big hole … Put us back in so we can do what we did before, on steroids.'”

Clinton also made the case that Clark should be appealing to Republicans, a case summarized by MPR’s Annie Baxter: “I was just thinking that if we lived in normal times, but we could bring back all the great Republicans from the past, every Republican from Theodore Roosevelt to Dwight Eisenhower would be voting for her in Washington.“

Bachmann’s response has been to say that this demonstrates that to Democrats, she’s a “high-value target,” according to the AP. This is a puzzling statement, as it’s self-evident, but Bachmann reveals the logic when she explains that Democrats see Clark as a “very reliable vote.” Many of Bachmann’s ads against Clark have painted her as being in lockstep with Obama and Pelosi, and Bachmann seems to see Clinton’s visit as being more evidence of this. How you feel about that is going to depend on whether or not your think that’s an obvious evil.

We should mention IP candidate Tom Horner. He has slumped in the polls — he’s now at 13 percent, dropping from his high of 18 percent last month — but everything else about his effort is pretty lively. First of all, as Bill Salisbury reports in the Pioneer Press, Horner picked up an endorsement from ex-Gov. Jesse Ventura, and Ventura always brings a welcome eccentricity to politics. In this instance, Ventura apparently forgot to let Horner know he was endorsing him.

Additionally, Horner unleashed some rather blunt criticism at his opponents at the latest debate, quoted by Tom Scheck of MPR. To Dayton, Horner said, “I think if they know anything about you, Senator, it’s that in 35 years you’ve never met a promise that you won’t make if it satisfies a special interest group.” To Emmer, Horner said, “It’s this listening problem that you have where you pretend that you know more than anybody else and then you talk to the rest of the public as if what you’re saying is the gospel. That’s where you get stuck by putting your stake in the ground and you won’t move. That’s not what we need right now.”

In arts: Chris Roberts of MPR looks at local band STNNNG, whose singer compares the band to the experience of falling off a bicycle and skinning your knee: “It hurts really bad, but it kind of feels good at the same time.”

In sports: If you have hopes for a publicly funded Vikings stadium, well, you’re in the minority. According to Mike Kazsuba of the Strib, a recent Minnesota Poll has 75 percent of respondents opposing public funding.