Well, it’s hard to avoid mentioning Our Favorite Congresswoman’s official declaration of presidential candidate-ness right here at the top. KSTP’s story last night said: “Tom Hauser is at the debate in New Hampshire. He reports that  Bachmann’s campaign sent out a release shortly after the announcement with details of her filing. They say an Iowa announcement will be made in ‘coming weeks.’ Bachmann’s announcement says she ‘suspended’ her 6th District campaign and is not ‘actively’ seeking re-election, but she still can. Her campaign also announced her candidacy over twitter Monday night.  Her campaign has already set up a website promoting her run for president and posted a video announcement on Facebook. A former aide to ex-Gov. Mike Huckabee announced Monday she is leaving her job with the Arkansas secretary of state’s office to work as national press secretary for Bachmann’s presidential bid.”

Minnesota AG’s move to keep funding going for certain state agencies even in the event of a shutdown is not playing well with some legislators. Rachel Stassen-Berger of the Strib writes: “Some lawmakers are already publicly challenging the idea that a court can authorize spending on even the most critical services. ‘If they do this, that’s unconstitutional,’ said Sen. Sean Nienow, R-Cambridge. The Minnesota Constitution says, ‘No money shall be paid out of the treasury of this state except in pursuance of an appropriation by law.’ Nienow said ‘there have been conversations amongst members’ about whether to sue to stop any court-ordered spending in a shutdown. But, he said, no one has yet decided to take that action. Nienow sued to stop the 2005 spending that a court allowed to continue during the partial shutdown, he said. The merits of that case were never really settled. DFL Rep. Ryan Winkler of Golden Valley voiced objections similar to Nienow’s. ‘The petition today asks the court to perform an unconstitutional function,’ Winkler said. ‘If the state officials continue to use the courts as a pressure-release valve for settling budget disputes, we will simply enable dysfunctional government to continue.’ “

You gotta give ’em credit for working every angle. The Vikings are looking to look in every imaginable nook to pay for road work around their Arden Hills dream. Tim Nelson of MPR says: “The Vikings are proposing what’s known as TIF, or tax increment financing. It pledges additional value raised by a project up front — to help finance the project in the first place. Usually it’s applied to property taxes to encourage development. Bagley says in this case, it’s a sales tax TIF. The Vikings road plan would also impose new taxes. They include a $3.50 parking surcharge, a 3 percent food and beverage tax at the stadium and a half-percent ticket tax at the stadium. But the road taxes would extend beyond the stadium as well. Ramsey County officials want to double the $20 fee already applied to car sales in the county to pay for transit. The extra money raised would pay off the stadium road bonds. Ramsey County Commissioner Tony Bennett said it’s fair for the public to chip in for work on freeways around the stadium.”

Over at the Strib, Rochelle Olson says: “Mark Dayton’s office had not seen the plan and deferred comment to the MnDOT, which released a letter Commissioner Thomas Sorel sent Friday to Rep. Morrie Lanning, a bill sponsor. The letter said many of the funding mechanisms proposed for the roads would count against the state cap set by Dayton. The team wants to use the entire $300 million to build the $1 billion stadium. The Vikings and Ramsey County announced a deal earlier this year requiring the team and the NFL to pay $407 million for the stadium. The county would pay $350 million from a countywide sales tax increase of a half cent. The new plan to pay for the roads projects relies on grants and a sales-tax exemption on construction materials used for roads improvements. In his letter to Lanning, Sorel said the sales-tax exemption and the grants would count against the cap.”

How many more times would you like to see one politician or another forced to apologize to an adversary? Don Davis of the Forum papers reports on the Gretchen Hoffman matter: “Hoffman, R-Vergas, must send an apology letter to Sen. Barb Goodwin, DFL-Columbia Heights, and tweet a link to the committee’s report finding her at fault. She also must remove her original tweet from her Twitter account. If the first-year senator complies, the committee will drop her case. All four committee members said the senator was wrong, but needed six hours to consider response to the tweet, the first social media-related Senate ethics charge. ‘Sen. Goodwin just called people with mental illness idiots and imbeciles while debating HHS bill,’ Hoffman tweeted May 18. The tweet came during debate on funding health and humans services programs. Goodwin three times referred to ‘idiots, imbeciles and the insane’ as terms that at one time were used for the mentally [ill], indicating that came in a time when care was inadequate.” But if Hoffman went on KTLK and said the same thing would she have to apologize?

And … another one bites the dust. The deliciously ratty Trevor Cook Ponzi scheme has its third indictment. Dan Browning of the Strib reports: “A Plymouth securities broker was charged Monday in a Minneapolis federal court with securities fraud, wire fraud conspiracy and money laundering in connection with Trevor Cook’s $194 million Ponzi scheme. Christopher Pettengill, 54, is the third person to be criminally charged in connection with the scheme but may not be the last. The charges were filed by way of ‘criminal information’ rather than indictment, and search warrant documents filed last month suggest that Pettengill is helping the government investigate his former business associates. Pettengill’s attorney, Thomas Heffelfinger, could not be reached for comment Monday. The charges say that for six months in 2008, Pettengill conspired with Cook and others to pitch a fraudulent foreign currency investment program, which led to losses of more than $150 million for nearly 1,000 investors, mostly retirees.”

Kuoa Fong Lee, the guy imprisoned for that terrible crash at Snelling Avenue in 2006, can sue anyone he wants for being wrongly incarcerated, but not Toyota. The AP story says: “In a pretrial order Monday, Judge Ann Montgomery ruled that Koua Fong Lee was wrongly convicted due to a long chain of actions and decisions by prosecutors, his attorney, the judge and the jury. She says none of Toyota’s alleged actions can be considered a ‘substantial factor’ in bringing about Lee’s incarceration.” 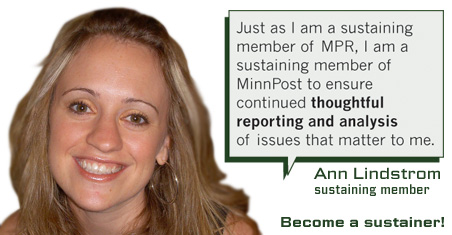 The Strib runs an editorial gently correcting Ecolab CEO Doug Baker’s grasp of the spending figures being batted around in the budget battle: “[W]e fear that, like many others, he may have been overexposed to one of the several spin machines that have been dispensing similarly confusing numbers for months. In fact, the 2012-13 spending proposed by the Legislature’s Republican majorities — and vetoed by DFL Gov. Mark Dayton — is $34 billion, or about $340 million less than total spending authorized in the 2010-11 biennium, which ends on June 30. … The discrepancy arises because of two factors: federal economic stimulus money, and the $1.9 billion ‘shift,’ or school payment delay, built into the 2010-11 budget. The help Congress sent the states in 2009 and 2010 gave Minnesota a one-time $2.3 billion discount — $1.5 billion for health and human services programs, and $800 million for ‘budget stabilization,’ divided among K-12 education, higher education and public safety. That money supplanted state dollars, but did not shrink spending totals. Permanent shrinkage is what Republican legislators propose for human services programs going forward. Their 2012-13 human services spending bid is $10.7 billion.”

GOP Rep. Tom Hackbarth, he of packing heat in a Planned Parenthood parking lot after a one-and-out coffee date last winter, just keeps on giving. Our Doug Grow lines up all the ducks in the latest incident: “Hackbarth, an eight-term legislator, fired off a strange response to one of his constituents, a member of the Minnesota Association of Professional Employees. In his e-mail, Hackbarth managed to tie Castro and Hitler into the current budget tussle. … Hackbarth’s response, via email, however, was unusual.

“Robin,
“I can’t believe what I’m hearing from folks? All similar letters to yours.
“Are you a Union member? If so, are they the communist giving you this propaganda?
“Do you know the who, what, when, where, why, and how, of Fidel Castro?
“Hitler rose to power using and blaming the jews for the destruction of the German economy. Castro built his army of murderers by blaming the rich bankers and capitalist for destroying Cuba and taking advantage of the Cuban people.
“Hummmmm?”

And that man is probably still toting a loaded gun.

Thank God! Hazeltine is back up and running. A KARE-TV story says: “Minnesota’s most famous golf course is back in business. Hazeltine National, Minnesota’s link to the golf world, had been closed for a year. Members at the private club had to sit through $15 million in renovations that includes a new clubhouse and greens. … The investment will come back to the club once again in 2016, when it hosts golf’s biggest event, the Ryder Cup. The Europe vs. America draw will likely bring in more than the 2009 PGA Championship did, and that event brought in $50 million to the local economy, thanks to 250,000 golf fans from 35 states.”

While I personally preferred Lac Lambert, no one is going to change the name of Lake Calhoun. Anthony Lonetree of the Strib says: “[I]n a three-page opinion addressing a potential renaming of Lake Calhoun, Brian Rice, attorney for the Minneapolis Park Board, says he believes the board ‘has no authority to change the name of a lake.’ That power, he wrote in a letter last week to board members, belongs to the state’s commissioner of natural resources. And in the current case — a citizen’s proposal to honor Hubert H. Humphrey instead of John C. Calhoun — even the commissioner is powerless. That’s because state law prohibits the commissioner from changing a name that’s existed for 40 years, Rice says.”

Bachmann’s in, makes it official