Predictably, Gov. Dayton and AG Lori Swanson are opposed to the GOP’s various moves to get courts to prohibit funding in the event of a shutdown. Don Davis of the Forum papers writes: “Democrat Gov. Mark Dayton’s attorney filed a court document this morning saying the senators have taken ‘diametrically opposed positions on the most fundamental constitutional issues,’ and asks the Minnesota Supreme Court to dismiss the case. The governor’s response joins that of Attorney General Lori Swanson, a fellow Democrat, in asking that the case go away. … In order to keep what they consider essential services going after the current budget expires, Swanson and Dayton want court approval for things ranging from providing law enforcement to keeping the governor’s official residence operating. Dayton presented a list of services he suggests stay open, with more than a third of the executive branch’s employees retaining their jobs. In the meantime, the senators who filed the suit and other lawmakers are promoting the idea of passing a temporary budget, at a reduced level, to keep government operating until a full budget deal can be reached. However, that would require Dayton’s blessing since only he can call a special legislative session for such action to occur.”

Power Line’s Scott Johnson, who has a large national audience, continues his now daily barrage on the Strib and reporter Rachel Stassen-Berger in particular. In this morning’s post he writes, “In Minnesota, we are engaged in an epic budget battle between a highly liberal and highly medicated Democratic governor who is contending with newly crowned Republican majorities in the state House and Senate. A state government shutdown is looming, scheduled to kick in on July 1. How goes the battle? Acting as the media adjunct of Governor Dayton’s office, the Minneapolis Star Tribune and lead political reporter Rachel Stassen-Berger have generally guarded the relevant facts against disclosure. Every day the Star Tribune runs stories that advance Governor Dayton’s agenda of spending and tax increases in one way or another.”﻿

Thursday’s court hearing on the budget will not stop the State Fair, reports MPR’s Tim Nelson. “Ramsey County District Court judge Kathleen Gearin is scheduled to open hearings tomorrow on what should and shouldn’t be kept running in the event of a state shutdown. One thing she probably won’t have to worry about? The Great Minnesota Get Together. ‘We’re not supported by the state in any way,’ says Jerry Hammer, the fair’s general manager. That said, the fair may rely on some state-funded services to get it up and going. It isn’t clear what inspectors, license issuers or other officials might be laid off and unable to attend to fair-related business if a shutdown lasts that long.” You want rioting in this state? Cut off access to deep fried food.

On Tuesday, it was “completely out of touch with reality”; today Gov. Dayton is describing the GOP as “not responsible.” Tim Pugmire at MPR reports: “In advance of a scheduled meeting with GOP legislative leaders, Dayton held a news conference today to highlight what he sees as the consequences of their proposed cuts. His list included college tuition hikes, local property tax increases and reductions in subsidized health care. Dayton said Republicans’ continued opposition to tax increases or spending beyond $34 billion is ‘not responsible.’ ‘We could negotiate this within a day,’ Dayton said. ‘But what’s stopping it is their insistence that it be $34 billion, not a penny more. Everything else just gets thrown under the bus, including the lives of Minnesotans.’ “

Also from MPR, Brett Neely in D.C., writes: “Here’s a quick update to my story from Monday about Michele Bachmann’s campaign organization. Bachmann’s leadership political action committee (which is legally separate from her campaign committee) filed its most recent monthly report yesterday. There are two things worth noting. First, she continues her solid fundraising, drawing in $217,000 in May, up from $174,000 the month before. Second, the report shows that MICHELEPAC hired a handful of individuals as ‘management consultants’ in Iowa and South Carolina. … The absence of organizers in New Hampshire suggests the Bachmann campaign may not see strong opportunities in the Granite State, where the evangelical vote carries much less clout.”

I’m not sure if this is the definitive list. But the Strib offers up a long one … on what will and will not be functioning, post-shutdown. 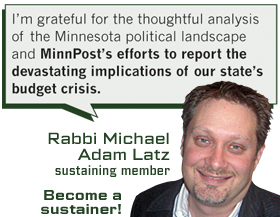 While no charges have been filed against anyone from AIG, or Goldman, Sachs, we do have these guys … The AP reports: “Four people from Minnesota and Wisconsin are charged in what authorities are calling a ‘sophisticated mortgage fraud scheme’ involving fake documents — including phony divorce decrees and the forged signature of a Minnesota judge. The case involves the sales of foreclosed properties in the Twin Cities area and tens of millions of dollars in federally-guaranteed mortgage loans.”

In the annals of really … really … bad boyfriends … Emily Gurnon of the PiPress reports: “A St. Paul man convicted of assaulting his sometime girlfriend and locking her in a dog kennel was sentenced this morning to 17-1/2 years in prison. Luke Brandon Scott, 30, continued to insist he never meant to terrorize the woman. ‘It was about her not driving drunk,’ he told Ramsey County District Judge Margaret Marrinan. ‘She knows that and I know that.’ Scott was convicted April 25 of first- and second-degree assault, terroristic threats and false imprisonment of Caitlin Hodges on the night of Sept. 26 and early morning of Sept. 27. … Hodges, 21, had told Scott she no longer wanted to be intimate with him. He became enraged, she said, and refused to let her leave his house in the 1200 block of East Reaney Avenue. Over several hours, Scott slapped her, threw her down, punched her, bit her, forced her to mop up spilled beer with her hair, dragged her by the hair, wrapped his arm around her throat, kicked her, hit her with a riding crop and a wine bottle, pointed a pellet gun at her face and threw his own dog against the refrigerator, she testified.”

For … just a bit more … on the arrest of conservative blogger John Hugh Gilmore last weekend, we turn to Jessica Lussenhop of City Pages: “As bystanders started to intervene, the shouting ramped up, and Gilmore started pacing around the crowd and yelling ‘Andrew Breitbart — hello!’ into his phone. That was the first time, says witness and visiting Netroots Nation-attendee Matt Glazer, that he realized the man was a conservative. ‘He made it sound like he was about to hurt people, so then that’s when I called the police,’ says Glazer. Police arrested him after he threatened a bystander and wandered away into The News Room bar. When confronted by cops, Sgt. William Palmer says Gilmore was uncooperative and ‘didn’t want to leave. He characterized Gilmore as ‘drunk.’ ” City Pages has both the mug shots and a YouTube video of Gilmore pretending to talk to Breitbart.”

Also from City Pages, I missed the story of Best Buy claiming copyright on the word “geek”. Erin Carlyle writes: “​Best Buy has already taken over the technical support world with its Minnesota-grown Geek Squad. Now, the company is claiming that it owns the word “geek.” The electronics chain recently sent a cease-and-desist letter to Newegg.com — an online competitor that tends to sell products a whole lot cheaper — demanding that it stop using a ‘Geek On’ advertising slogan. The phrase, Best Buy argues, is too similar to its ‘Geek Squad’ brand. Since when did being a ‘geek’ become a corporate product? Best Buy’s cease-and-desist letter claims that Newegg’s use of the word ‘geek’ and orange and black in its ‘Geek On’ logo rips off Best Buy’s established trademark. What’s more, the tech giant is upset over commercials on YouTube that it says portrays employees as ‘slovenly and uninformed.’ ” Uh, note to Newegg … the orange-and-black thing was a step too far.

Sally Jo Sorensen at Bluestem Prairie is keeping an eye on the Gretchen Hoffman affair, the GOP senator of the tweet-she-was-forced-to-apologize-for. Says Sorensen: “[T]he Fergus Falls Journal’s letters and comment sections are buzzing with local supporters of Senator Hoffman. In the worldview of these folks, Hoffman is a victim of DFLers and the Old Boys Club, both forces which rule the Minnesota Senate’s Subcommittee on Ethics.” Despite the fact that fellow Republicans on the ethics panel agreed with the apology solution in exchange for dropping the complaint. So, “ [W]ill Hoffman do the mature thing and set her local supporters, some of whom are local Republican party officials, straight about the ethics process and her own apology? Since the letters are appearing in the local paper, Hoffman might want to put her corrections in writing in the paper as well. Or does she approve of their misrepresentations of the record and the Senate ethics process, including the conduct of that process by the Republican President of the Senate?”