The consensus off last night’s CNN debate seems to be that Our Favorite Congresswoman, Michele Bachmann, lit a rocket under her candidacy, but T-Paw looked like a guy holding a rubber knife. Kevin Diaz of the Strib writes: “Pawlenty, taking aim at Romney, whom he needs to unseat as front-runner, gave an interview to Fox News Sunday where he first used the term ‘ObamneyCare.’ But the quip came back to bite Monday night when CNN moderator John King pressed him to repeat the phrase to Romney outside ‘the comfort of a Sunday show studio.’ Pawlenty, appearing visibly uncomfortable, said the term was ‘a reflection of the president’s comments that he designed ObamaCare on the Massachusetts health care plan.’ … Neither Bachmann, who introduced herself as a mother and a tax attorney, nor Pawlenty, who introduced himself as a father and ‘neighbor,’ arrived on the stage unbloodied. Romney’s camp had already fired back at Pawlenty through a pre-debate tweet by spokesman Eric Fehrnstrom, who noted that as governor, Romney left behind $2.3 billion ‘in cash for his successor.’ The statement didn’t mention Pawlenty, but it clearly begged for comparisons with the Minnesota governor, who left office in January with a $6.2 billion projected deficit.”

Mark Zedechlik, in New Hampshire for the debate, says at MPR: “Following the debate, surrogates from the campaigns tried to convince reporters their candidates did the best. Watching off to the side was longtime GOP insider Patrick Griffin, who’s worked for both Presidents Bush and several other candidates. He is not working for any of the 2012 contenders. Griffin said he was impressed by Bachmann’s performance. Griffin said Bachmann looked and acted presidential. ‘Michele Bachmann was better than expected. Early on, that’s important,’ said Griffin. ‘She was more deliberate, I think more thoughtful, I think more presidential than Sarah Palin comes across in these kind of venues.’ Griffin said Pawlenty made a mistake by not jumping at the chance to distinguish himself from Mitt Romney, who is perceived to be the frontrunner. ‘He teed up the health care issue, wouldn’t take the bait on it, kind of punted on it a bit — which I thought was clumsy,’ said Griffin. ‘I thought he had an opportunity to say, ‘I said that, I think it’s true.’ “

On the Strib’s “Hot Dish Politics” site, Bob von Sternberg collects a sampling of opinion on the debate: “[I]nitial reviews are in after the New Hampshire presidential debate Monday night, leaving former Gov. Tim Pawlenty wincing and Rep. Michele Bachmann beaming. Bachmann, who announced her presidential run during the debate, was rated a hands-down winner by both the National Journal and the Washington Post’s The Fix. Pawlenty, who spent the weekend stumping in the Granite State, got a harsh thumbs-down from both publications. One in five Republican and Democratic insiders polled by the National Journal rated Bachmann the biggest winner of the debate, second only to former Massachusetts Gov. Mitt Romney, the putative frontrunner in the GOP field. A quarter of the Republicans rated Pawlenty the biggest loser, as did 30 percent of the Democrats polled. … Pawlenty’s performance in the debate and his failure to take on Romney is ‘prompting fresh doubts among members of his own party about his readiness to confront the GOP frontunner.’ The performance ‘was met with a mixture of derision and bewilderment among veteran GOP strategists.’ ”

Talk about a randy old coot. Elizabeth Dunbar of MPR tells the tale of an 83-year-old being flown — on his private plane — from Arizona to Rochester for medical  treatment: “Robert M. Lee was on his private plane traveling under the care of a paramedic and a registered nurse from Show Low, Ariz., to Rochester. According to court documents, Lee grabbed and twisted the paramedic’s breast, causing injury, as the paramedic helped him return to his seat. Federal prosecutors said the paramedic asked Lee not to touch her, and Lee allegedly replied: ‘I can do whatever I want. This is my airplane.’ When the registered nurse told him he couldn’t touch the medical crew, Lee allegedly repeated he could on his airplane and threatened to do the same thing again. Lee then told the nurse she should be wearing a shirt that would allow him to slide his hand down it more easily.” 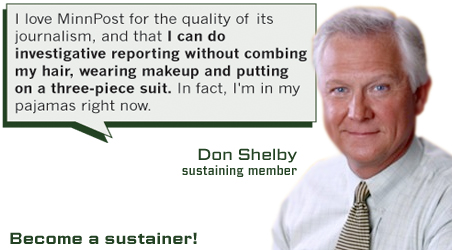 This one is good. The GOP legislators are upset that they’ve been singled out as the culprits for the lack of a budget and a looming shutdown. Tom Scheck of MPR reports: “State agencies are sending out notices to contractors, vendors and grantees telling them that the state may not be making any payments if state government shuts down on July 1.

‘As you may know, the Minnesota State Legislature adjourned on May 23, 2011, without appropriating money to fund the operations of state government for the fiscal year that starts on July 1, 2011,’ Department of Employment and Economic Development Commissioner Mark Phillips wrote in a letter.

Sen. Dave Thompson, R-Lakeville, issued a statement criticizing the letters.
“DEED’s lie is shameful,” Thompson said. “The Minnesota State Legislature adjourned on May 23, 2011, having passed the largest general fund budget in state history, which appropriated money to fund the operations of state government for the fiscal year that begins July 1, 2011. It is inconceivable that the Department of Employment and Economic Development, under Gov. Dayton’s direction, did not know this fact. Therefore I must assume this is a deliberate attempt by DEED to spread misinformation about the work product of the Minnesota legislature. DEED Commissioner Mark Philips should issue a new, corrected letter to contractors, vendors and grantees reflecting that truth.”  Frankly, if I were Mr. Thompson, I’d try to avoid drawing any attention to “the work product” of said Legislature. No good can come of it.

If these things come in threes … Andy Rathbun of the PiPress writes: “Craig Vick, of Osceola, Wis., was riding a 2004 Harley Davidson east on Polk St. Croix Road at about 4:15 p.m. when he struck a deer about a mile east of Wisconsin 35. Vick was thrown from the motorcycle and was pronounced dead at the scene, according to the St. Croix County sheriff’s office. He was not wearing a helmet at the time of the crash, police said.

And … from WSAW-TV, also over in Wisconsin: “A Black River Falls man has died after trying to avoid crashing into a wolf in Jackson County. Authorities say the crash happened on Monday around 1 p.m. on County Highway C, east of Cloverdale Road in the Town of Albion, near Black River Falls. Deputies say it appeared that the cycle tried to stop very quickly. The motorcycle hit an animal and then went into a skid, throwing Hart from the motorcycle. A deputy found a deceased wolf close to the crash site. Hart was not wearing a helmet.”

Oh, and to that last business, an annoyed commenter writes: “I’m getting real tired of hearing in your stories that the driver was not wearing a helmet, yet you make no mention what so ever about head injuries. How did he die? Helmets do not save lives in all instances and in fact can be a contributing factor in some accidents. My husband and I were in a crash without helmets doing about 50 mph and neither of us had a single head injury. Please start reporting all the facts and not just the ones you want the public to know about.”

A 40 percent neglibile benefit rate is not good for any product, much less a pricey medical gadget with life-sustaining responsibilities. Janet Moore of the Strib says: “This can’t be good for local companies that make cardiac resynchronization devices — meaning Medtronic, Boston Scientific and St. Jude Medical. A study published online Monday in the Archives of Internal Medicine indicates these expensive devices provide little benefit to almost 40 percent of patients suffering from heart failure. Here’s the Wall Street Journal story. This comes on the heels of a study published earlier this year in the Journal of the American Medical Association suggesting a sister device called implantable cardioverter defibrillators (ICDs) are overused. And the U.S. Department of Justice is investigating Medicare billing for the devices.”

Erin Carlyle of City Pages paints a not-too-pretty picture of landlords not repairing property damaged in the May tornado in north Minneapolis: “Some of the landlords aren’t making repairs yet. Others are opting not to make repairs at all. Still more landlords are withholding deposits from tenants forced to move out of homes deemed uninhabitable. ‘If they think they can keep someone in there and not fix things while collecting rent, they cannot do that,’ says Don Samuels, Minneapolis City Councilman. Some of the bad landlords may face lawsuits: Legal Aid has collected 32 cases of tenants complaining about mistreatment by their landlords. Half the cases are over missing deposits, ranging between $800 and $1,300, says Drew Schaffer, Legal Aid attorney. However, none of these cases has been filed in court yet, because by law, property owners have three weeks to mail the deposit checks. The nonprofit is waiting until the end of the week to determine which cases to sue out.” Classy.