Racino 2012 … we barely knew ye. Tim Nelson at MPR reports: “A bill to legalize slot machines at Minnesota’s two horse tracks failed in a Senate committee this Monday afternoon. The State Government Innovation and Veterans committee voted 8-5 against the racino bill.  Even a last-minute change that would have dedicated the proceeds to potentially tens of thousands of college scholarships did not sway legislators. Bill sponsor Republican Majority Leader David Senjem said he was disappointed the bill didn’t pass, but said there was progress. ‘I don’t think we’ve ever had a full-blown hearing. This was a full-blown hearing with a vote,’ Senjem said. ‘We kind of tested the water and found out where the rocks are.’ The vote may mark the end of racino prospects for this year. Opponents on both sides of the political aisle said they were wary of opening the door to new gambling.” So what do they think about electronic pull-tabs?

Need to take your mind off “right to work,” Brodkorb and a stadium bill that’s going nowhere fast? Bring in Bud Grant. Don Davis of the Forum papers writes: “[T]he most entertaining episode probably was an unannounced appearance by a Minnesota football legend, former Vikings coach Bud Grant, urging lawmakers to raise hunting and fishing license fees to fund programs related to those activities. He must have done well: The Senate natural resources committee unanimously passed the bill with license hikes. Usually, senators ask tough questions about the issue a witness discusses. But it was obvious from the get-go that Grant was not the normal witness. Sen. Bill Ingebrigtsen, R-Alexandria, wore an ear-to-ear smile when Grant sat down next to him to support his bill. Grant opened his testimony joking that he was there to discuss something more important than a stadium, the most-discussed issue of the legislative session. He buttered up the outdoors-oriented committee by proclaiming the Mississippi, Minnesota and St. Croix rivers offer the best fishing experiences in the country. … At the end of his testimony, Sen. Jeremy Miller, R-Winona, started to applaud, but caught himself after one clap. Legislators pretty much never applaud a witness.” If he’d asked, Bud might have blessed his Helga braids.

A PAC has been formed to fight the so-called “right to work” legislation. Says Catharine Richert at MPR: “Minnesota’s unions have formed We Are Minnesota, a fund meant to raise money to oppose a proposed constitutional amendment that would make union membership and the payment of union dues voluntary for all workers. A Senate panel approved the ‘right-to-work’ bill last week. We Are Minnesota is backed by ‘public and private sector workers, nurses, firefighters, police officers, teachers, construction workers, clergy, small business owners, local elected officials, students and your neighbors,’ according to the group’s web site. The committee was registered March 9 with the Campaign Finance and Public Disclosure Board by the Minnesota arm of the AFL-CIO, an organization that represents labor unions.”

Speaking of … Workday Minnesota, the labor website, is encouraging members to show up at the Capitol to protest the GOP’s Voter ID bill. It says: “The Minnesota AFL-CIO is asking union members to converge on the state Capitol Tuesday at 5 p.m., when the Minnesota House is scheduled to vote on a voter ID amendment. … The proposed legislation would put a measure on the November ballot to amend the Minnesota Constitution to require all voters to submit photo identification at the polls. It would eliminate the current process by which neighbors can vouch for voters without identification and would make Election Day registration impossible.” How soon before we hear the next “jackbooted union thug” reference? 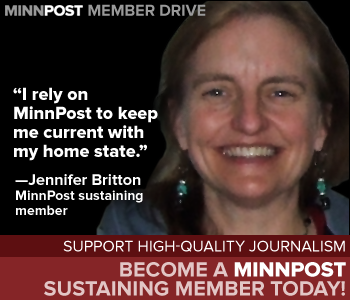 As I say, this one is something to keep on the radar. Dennis Lien of the PiPress reports: “The Minnesota House opted Monday … to shift control over 2.5 million acres of school trust lands in northern Minnesota from a state agency to a new board in hopes of generating more money for schools. The House voted 104-26 to scrap oversight of those lands by the Department of Natural Resources and give it to a five-member permanent school fund board. Sponsored by Rep. Tim O’Driscoll, R-Sartell, the bill tries to raise more money for public schools from land the federal government gave the state when it was established in 1858. Most of that land was sold off for agriculture or development long ago, but what’s left is typically in northern Minnesota and not available for sale or such revenue-generating practices as development. The DNR manages those lands, generating income through timber sales, land leases and mineral royalties. After expenses, it sends leftover money to a permanent trust fund. In recent years, that fund has generated $22 million to $27 million a year for public schools, a level critics of the arrangement contend could be higher.” And how … exactly?

Wisconsin’s circuit court judges are not big fans of Gov. Scott Walker. The Sheboygan Press reports: “Twenty-nine circuit court judges in Wisconsin were among the thousands to sign recall petitions against Gov. Scott Walker, according to a Gannett Wisconsin Media analysis. Dane County Judge David Flanagan has drawn the lion’s share of the scrutiny after issuing a temporary restraining order March 6 against a Walker-backed voter ID law without disclosing his support of the recall, but the analysis shows he was joined by judges from 15 other counties in signing petitions. Walker supporters were outraged that Flanagan did not disclose his apparent conflict and filed ethics complaints against the judge. However, judges who signed the petition and agreed to interviews defend their decision as constitutionally protected and not explicitly banned by the Wisconsin Code of Judicial Conduct. Twelve percent of the state’s approximately 250 county-level judges signed the petition. By comparison, the 930,000 signatures submitted by recall organizers would represent 21 percent of the state’s voting-age population, if all signatures were valid.”

Amanda Terkel, at The Huffington Post, writes: “[O]thers are wondering why a judge would sign a petition, thereby awakening potential criticism and questions of bias. Professor Richard Painter of the University of Minnesota Law School questioned why judges would expose themselves to criticism and a potential perception of bias by signing the recall petition, though he acknowledged there might be wiggle room within the judicial code allowing judges to sign. ‘For judges to be getting involved in the question of whether the governor ought to be recalled I think is highly inappropriate,’ said Richard Painter, who served as chief ethics lawyer in President George W. Bush’s administration. ‘Whether it violates an ethics rule or not in Wisconsin, I think it’s very inappropriate.’ ”

There’s something wrong when New Jersey is at the top of the list of least corruptible state governments and supposedly saintly Minnesota is 25th. At City Pages, Aaron Rupar writes: “Minnesota is in the middle of the pack when it comes to the potential for government corruption, according to a new study by the Center for Public Integrity, Public Radio International, and Global Integrity. The study, called the State Integrity Investigation, gave Minnesota a D+ grade, which ranked 25th out of the 50 states. New Jersey got the best grade, Georgia the worst. To see the full rankings, click here. Areas of particular concern for Minnesota included a lack of legislative openness, weak campaign finance oversight, underfunded government watchdog organizations, and inadequate consequences for ethics violations in the legislature.”  These numbers could slump further, post-Brodkorb depositions.