For all you Ron Paul vs. the GOP watchers out there … Bill Salisbury of the PiPress writes: “Freshman state Rep. Kurt Bills, a Rosemount High School economics teacher, is widely considered the frontrunner in a three-way race for the Senate endorsement at the state Republican convention Friday … at the River’s Edge Convention Center in St. Cloud. ‘Although the situation is fluid, most people say Kurt Bills is the favorite because he has the support of the Ron Paul crowd, and they are going to play a major role at the convention,’ said Ben Golnik, a veteran Republican strategist who is not aligned with any Senate candidate. … Bills asserted the United States doesn’t need to keep 733 military bases around the world to maintain a strong national defense. He said he agrees with the Bowles-Simpson commission’s recommendation to close one-third of those bases. ‘The greatest risk to our national security is our national debt,’ he said. The election will be about the economy, he said, and that’s why Republicans should endorse an economics teacher.” Considering the impact of obesity on our health care/financial situation, you could argue what we need in the Senate is a nutritionist.

At The Week, Ed Morrissey explains Paul’s grand strategy: “Paul will now focus his efforts on consolidating his gains in caucus states and taking delegates away from the other three Republicans. … He has already succeeded in winning half of Minnesota’s delegates, thanks to superior organization at the local and congressional-district conventions, taking an important victory away from Santorum. Paul may well win the rest of Minnesota’s delegates at the state convention, and then repeat this process in caucus state after caucus state. … The aim for Paul isn’t the convention, which is a mainly meaningless but entertaining exercise in American politics. The real goal was to seize control of party apparatuses in states that rely on caucuses. With that in hand, Paul’s organization can direct party funds and operations to recruit and support candidates that follow Paul’s platform, and in that way exert some influence on the national Republican Party as well, potentially for years to come. Paul hasn’t won every battle in that fight, but Minnesota will probably end up being more the rule than the exception.” 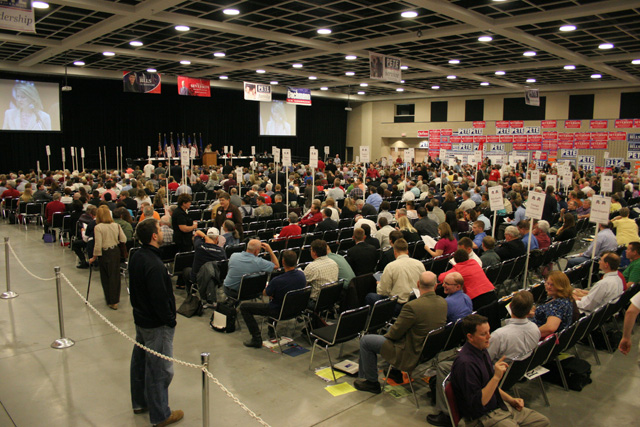 At the Strib, Rachel Stassen-Berger writes: “The Minnesota Republican Party is teetering on the same edge of chaos that sparked a fist fight at an Oklahoma party convention and jeers at an Arizona gathering addressed by presidential candidate Mitt Romney’s son. … Paul supporters have already flexed their might in the state’s Republican Party. They claim 20 of the 24 national delegates already selected at local Republican gatherings. They ousted a GOP insider from the party’s ruling body and thwarted some sitting lawmakers’ attempts at party positions. While Paul has suspended his presidential bid, he’s made clear that his fight in the party is far from over and that the next front is in Minnesota. The 12-term Texas congressman will address the convention Friday night. It’s a privilege he was denied four years ago and supporters have stewed about the slight ever since. ‘Starting with the Minnesota State Convention this weekend, our movement has an opportunity to secure more delegates, take control of more local and state parties … to achieve lasting victory in the years to come,’ said John Tate, Paul’s campaign manager.”

It’s no secret that uber-conservatives despise public radio. So much touchy-feely, liberal, “nuancy” stuff. So little concern for the Kenyan Muslim Socialist apocalypse. Paul Mirengoff at Power Line writes: “NPR’s audience is no longer expanding. In fact, ratings fell by a little more than 1 percent last [year], the first decline in a decade. The loss of listeners occurred even though the number of stations carrying NPR programs grew by about 2 percent. Once every upscale white liberal in America with a radio is tuned in, growth becomes difficult for an operation as doctrinaire as NPR. … Sen. Jim DeMint is leading a drive to defund the Corporation for Public Broadcasting, which funnels money from taxpayers to public radio and television stations. … Clearly, then, the defunding of the Corporation for Public Broadcasting would deal a blow to NPR at a time when it can ill-afford the setback. Conservatives have been trying to end federal funding of the Corporation for Public Broadcasting for years, to no avail. But given our national fiscal crises, and depending on how the election goes this fall, defunding may not be out of the question.” I love it when Power Line says “doctrinaire,” like its a bad thing.

With $25 million to spend, you probably can create your own facts. Jim Ragsdale of the Strib wades into Wisconsin’s recall election and those new, previously unseen/unheard job creation numbers Gov. Scott Walker discovered and is now touting: “Walker, a national hero to fiscal conservatives and union opponents, and Barrett, the Milwaukee mayor who is trying to marshal the state’s recall fervor, both understand that the economy will be pivotal in the June 5 recall election, as it undoubtedly will be in November’s presidential race. So a dust-up about two sets of mirror-image job numbers — one a regular fixture on the economic scene and the other a product of a separate employers’ census — is being taken seriously. ‘It was a swing from down here, to up here, of more than 57,000-plus jobs,’ Walker said Thursday, gesturing to show the chasm between the miserable performance indicated in federal reports and the solid gains his own administration reported this week. … A bureau survey released last month showed Wisconsin to be the nation’s worst-performing state from March 2011 to March 2012, dropping 23,900 jobs. No other state was even close. … This week, as the recall election kicks into high gear, Walker’s state Department of Workforce Development reported numbers that were just the opposite.”

Also at The Week, a breakdown of Walker’s situation and relevance: “Does the election matter outside Wisconsin? There’s no doubt about that. The recall, which pits Walker against Democratic primary winner Tom Barrett, is widely seen as a precursor to the 2012 presidential race, and as a proxy for the national battle between small-government conservatives and populist progressives. Walker is not alone in arguing that taxpayers can no longer afford to pay for the lavish benefits, pensions, and salaries of unionized government workers; Republican Govs. Chris Christie of New Jersey and John Kasich of Ohio are among the many who have vigorously taken up the chorus. Mitt Romney calls Walker ‘a hero.’ The Wisconsin governor has amassed a recall war chest of $25 million, at least 60 percent of it from out-of-state Republican donors … ‘We’ve spent a lot of money in Wisconsin,’ said conservative donor David Koch of Koch Industries. ‘If the unions win the recall, there will be no stopping union power.’ ”

Add local Lutherans to those opposing the so-called gay marriage amendment. Rose French of the Strib writes: “St. Paul-area Lutherans are expected to go on record this weekend against the proposed marriage amendment to the state Constitution that would define marriage as a union between a man and woman. Nearly 600 Lutherans, representing about 115 congregations in the St. Paul Area Synod of the Evangelical Lutheran Church in America, are scheduled to vote Saturday at the group’s annual assembly in Burnsville. ELCA Lutherans are the state’s second-largest religious denomination, with nearly 800,000 members. The vote is expected to follow earlier ones held by the Minneapolis Area Synod and three other Minnesota synods, all of which went against the marriage amendment.” As an old (Catholic) altar boy, I remember when we used to accuse the Lutherans of being “heathens.”

A McClatchy story says Minnesotans will stay closer to home for Memorial Day — and other — vacations: “AAA is predicting that 34.8 million Americans will be traveling during the Memorial Day weekend, an increase of only 1.2 percent from last year’s numbers. Generally, people still will travel but try to economize by staying closer to home and trimming their expenses on everything from gas to meals, AAA said in its forecast released this week. The clearest sign of that penny-pinching can be seen in air travel. AAA is projecting the number of leisure air travelers will drop by 5.5 percent, or from 2.7 million passengers to 2.5 million passengers this coming holiday weekend. It’s a significant decline, said Gail Weinholzer, spokeswoman for AAA for Minnesota and Iowa. Meanwhile, more travelers will make shorter road trips of 150 miles or less — 21 percent this year compared with 19 percent last year, AAA reported.”

A couple southwestern Minnesota legislators weighed in on the Minnesota Chamber of Commerce’s evaluation of the 2012 legislative session. Writes Per Peterson in The Marshall Independent: “District 21 Sen. Gary Dahms, R-Redwood Falls, who along with District 21A Rep. Chris Swedzinski, R-Ghent, … assessed the progress the state made on producing jobs and said building up the job market and taking on unemployment in Minnesota is a multi-step process that doesn’t happen overnight, or in one session. ‘In 2011 we said we have to get this budget in line and live within our means and try to get confidence in our business community that we have stability at the state level with the budget,’ Dahms said. ‘Then we started talking about permitting and looking at losing regulations to make it more viable for our businesses to come to Minnesota, stay in Minnesota and thrive in Minnesota.’ ‘If we’re elected, we’ll continue this,’ Swedzinski said. ‘Rome wasn’t built in a day, and the expectations we have as a state can’t all be taken care of in one day.” And please remember, folks, sequencing is everything. You have to have Voter ID and stop gay marriage before you can create jobs.