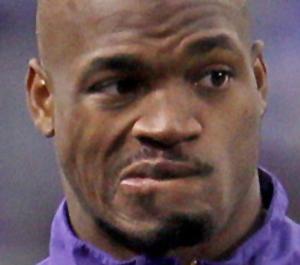 The third time’s the charm? Early Wednesday morning, the Vikings — reversing an earlier decision — announced that they are indefinitely suspending Adrian Peterson in the wake of his indictment on child abuse charges, reports the Pioneer Press’ Kevin Cusick: “After a day in which Minnesota’s governor and one of its senators called for the suspension of the star running back, the team placed Peterson on the exempt/commissioner’s permission list, meaning he cannot take part in any team activities while his case proceeds. Vikings owners Zygi and Mark Wilf issued a press release at 12:47 a.m. … ‘This has been an ongoing and deliberate process since last Friday’s news,’ [the Wilfs’ statement read]. ‘In conversations with the NFL over the last two days, the Vikings advised the League of the team’s decision to revisit the situation regarding Adrian Peterson. In response, the League informed the team of the option to place Adrian on the Exempt/Commissioner’s Permission list, which will require that Adrian remain away from all team activities while allowing him to take care of his personal situation until the legal proceedings are resolved.'”

Meanwhile, Peterson’s lucrative endorsement deals are withering. Mike Kaszuba and Master Tesfastion of the Strib report, “Even Peterson’s Texas-based philanthropic foundation shut down its website, saying it was on ‘hiatus’ and would ‘re-engage after Adrian, his family and staff have reflected on how the current situation impacts the direction for Adrian’s philanthropy.’ Nike’s store at the Mall of America stopped selling No. 28 jerseys, and Wheaties confirmed it had severed ties with Peterson.”

A Strib commentary by a St. Thomas ethics prof, Christopher Michaelson, says, “Should it surprise us that exceptionally large, strong and fast men — who have been trained, exhorted and rewarded since childhood to annihilate one another on the field — have difficulty restraining these impulses off the field? … Even as [the NFL has] put new rules in place increasing protections for so-called ‘defenseless’ players, regulators seem unable to keep pace with the speed and strength of the modern player. Of greater concern is that they have not even begun systematically to examine holistically whether the on-field behaviors they champion translate into off-field recklessness.”

As you might expect, conservatives are giddy at the departure of PreferredOne Health Insurance from MNsure. Says The Daily Caller, “The largest insurer with the lowest premium rates on Minnesota’s Obamacare exchange is dropping out because the government health-exchange is unsustainable, the company announced Tuesday. … Minnesota is scheduled to announce premium rates for 2015 Obamacare plans in October and signs point to looming price hikes that will hit Minnesotans doubly hard.”

Likewise, GOP candidates: Patrick Condon of the Strib says, “Republican candidate for governor Jeff Johnson blasted Gov. Mark Dayton on Tuesday for what he called ‘breathtaking incompetence,’ after it was revealed that the insurance company that sold more policies on MNsure than any other is pulling out of the exchange.”

Beth McDonough’s story for KSTP-TV says, “Gov. Mark Dayton says the move is competition in action. Dayton has called the state-run exchange he championed a success because it has cut the ranks of uninsured by nearly 41 percent. Republicans say PreferredOne’s withdrawal is the latest sign of systemic problems.”

At the website Healthcare Dive, Katie Bo Williams says, “The lesson here is that high enrollment doesn’t necessarily translate to program solvency, notes healthcare analyst Dan Diamond. Small insurers often struggle with the ‘administrative and financial complexity’ of managing large customer bases on ACA exchanges, according to Diamond.  … What remains to be seen is how the PreferredOne withdrawal will impact state premium rates in 2015. According to University of Minnesota political expert Larry Jacobs, rates could go up by 10% to 15% in 2015.”

And then there’s still the Archdiocese. Madeleine Baran at MPR writes, “Efforts by the Archdiocese of St. Paul and Minneapolis to cover up clergy sex abuse stretch back to at least the 1950s — a decade earlier than previously revealed, according to documents released today by victims’ attorneys. The archdiocese file on the Rev. Louis Heitzer shows that bishops used now-familiar strategies to protect Heitzer from prosecution nearly six decades ago. During the 1950s and 60s, four bishops failed to notify police of allegations that Heitzer sexually abused several boys. Instead, the archbishops transferred Heitzer to 14 parishes over his 27-year career.”

This seems unnecessary. Says Alejandra Matos in the Strib: “Amelia Backes is an eighth-grader at Carondelet Catholic School in south Minneapolis who just got cut from the public school’s alpine ski team. Poor performance did not doom her chances; enforcement of a long-ignored rule did. … Backes was eliminated from the team after athletic officials decided that students not in public schools could no longer participate in taxpayer-funded sporting programs.”

Supreme Court Justice Ruth Bader Ginsburg was in town yesterday. Elizabeth Mohr of the PiPress writes, “Her most disarming and telling remarks came at the end of the nearly two-hour Minneapolis engagement. A 12-year-old boy, after complimenting the veteran justice on her work in the courtroom, asked Ginsburg what would be the defining issues for the courts of the future. Without missing a beat, the measured Ginsburg told the boy, ‘One issue that will certainly be on the table is the environment. … Saving our planet will be a central issue of your time.’”